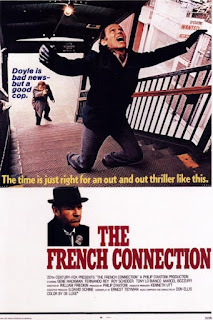 Cops and criminals: do they have more in common than we’d like to think? In Friedkin’s Oscar-winning The French Connection, the lead cop and criminal are both obsessive, single-mindedly ruthless and locked into a cycle of actions that isn’t going to be change with one big bust. Look at them in isolation and its hard to tell at times which is which: the French drug dealer is a suave cosmopolitan type, unfailingly cultured and polite, but remorseless; the cop is a border-line racist and narcissist who doesn’t give two hoots about collateral damage, kills without remorse and whose life is one of tunnel-visioned obsession.

Based on a true-story – the model for Doyle, Eddie Egan, has a cameo playing his own boss – the film covers the arrival in New York of French heroin dealers, led by Alan Charnier (Fernando Rey) looking to make a killing with their prime product. Opposite them is narcotics officer Jimmy “Popeye” Doyle (Gene Hackman), who’s practically the dictionary definition of anti-hero. Doyle and Charnier engage in a battle of wits and force across New York during one blisteringly cold few days in Winter, and never mind who gets in the way.

The French Connection is about masculinity, and that no matter what many men don’t like to lose. Getting beat is certainly the main concern for Doyle, who I’m not sure has ever really thought twice about the impact of drugs (he’d be just as passionate chasing down coca-cola or stamps if you banned those). Neither has Charnier, with his reassured cool of old Colonial Europe, which just knows better than the nouveau Americans. (there is an underlying subversive fear of America being undermined by this suspiciously metropolitan Frenchman, the country’s bets defence being a loud-mouthed, son of the streets).

Played superbly by Gene Hackman, Doyle is presented as a man we are invited to make up our own mind about. He’s obviously an effective detective and he doesn’t just go the extra mile: the job is a night-and-day obsession. He’ll spend hours pounding the streets, staking out a hotel on a rainy street, walk miles tailing a subject and barely spend a minute off-duty. He’ll also drive cars wildly though crowded streets, shoot a man in the back, rough-up suspects and treat others with an abrupt anger, xenophobia or both. As a model for the society he’s sworn to protect, he’s a disgrace – but is he the effective agent of crime-fighting we need?

Friedkin’s film largely aims to present Doyle as he is, within its documentary realism – although I’d argue the film repeatedly looks at his commitment and never-say-quit-energy with barely veiled admiration. The film is assembled with an on-the-streets immediacy reminiscent of The Battle of Algiers – added to by the casting of many non-actors in key roles. It’s shot with a drained-out series of muted colours (even more drained-out in Friedkin’s egotistical blu-ray remastering). All shot on location, it captures the slummy flavour of the rougher ends of New York. Right from the off, we see Doyle and Russo roughing up an informer in something between a slum and building site (including the famous “do you pick your toes in Poughkeepsie” exchange, a classic bit of psychological messing with criminals – incidentally check out Scheider trying not to corpse as Hackman roars through this.)

The investigation proceeds with a muted sense of grounded realism. There is a lot of time-consuming following, watching and taking notes. Word is picked up by informers. Careful surveillance work fills out the gang and its members. Doyle is constantly frustrated by bureaucratic demands, not to mention turf-war squabbles with the FBI (who, in addition, think he might be next door to a dirty cop which is pretty fair). Similarly, the criminals go through careful negotiations around timing, testing the purity of the goods and working out the best way of dodging the cops.

Friedkin’s film is so wrapped up in a perfect “slice of life” documentary realism shell, that it gets away with much of the second half being a piece of pure filmic flair. First and foremost is its famous car-chase set-piece. Narrowly surviving an assassination attempt from “Frog Two”, Doyle requisitions a car and hares through the streets of New York at 90mph trying to beat the elevated train “Frog Two” is escaping on, to the next station. In this superbly cut sequence, Friedkin pioneers the sort of low-angled front bumper shots that would be a staple of car chases for years to come. It’s pounding, gripping and brilliantly assembled, a raw slice of action that uses the film’s documentary style to trick you into thinking it’s something akin to the realism elsewhere.

But it’s a bit of filmic fantasy – and wouldn’t be out of place in Dirty Harry, the other 1971 film about a morally-complex cop. Doyle is certainly a less attractive person than Callahan – with no real moral feelings just a love of winning. Winning is what motivates him in this car chase: he has little interest in questioning the shooter (who has, to be fair, taken out several civilians, including a mother of a young baby) or preserving public safety and way more about getting revenge. He tears through the streets, sending civilians flying, scares Frog Two into killing two more people and finally caps it by shooting his unarmed would-be-killer in the back after a cursory warning. (Not the first time he’ll pull the trigger after only the most slender of warnings).

Winning is all that matters though. Charnier is just as bad. He ruthlessly exploits a patsy and has no concerns about bodies piling up. Fernando Rey’s impish smile and campily cool little wave to Doyle through the subway doors, after he has managed to shake him off in a marvellous sequence in a subway station, is all about enjoying a smug triumph. No wonder Doyle repeats the same gesture to him late in the film when the tables are turned. 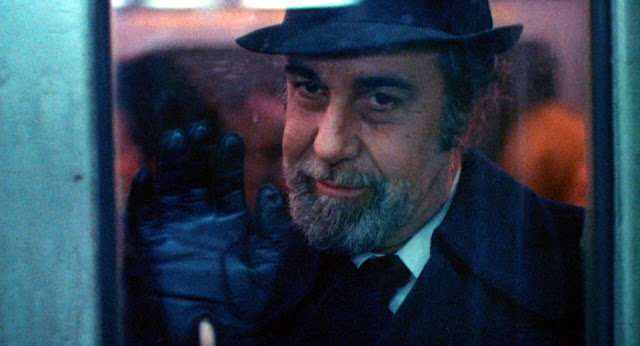 It’s the way Friedkin’s film mostly doesn’t ask us to blindly root for Doyle that really makes it stand out. In many ways the film is less exciting – or even less intriguing a character study – than Dirty Harry. It uses its documentary realism heavily at times, to justify showing the sort of shocking, exploitative material (at one point, the camera lingers on the incidental victims at a car crash scene at distasteful length) that you would expect to find in Dirty Harry or Shaft. What Friedkin’s euro-inspired style – and Hackan’s committed playing – managed to do was make itself feel like it was making a higher artistic statement than those films, which played a much more conventional hand.

That and the sense that nothing has really changed. Early in the film Doyle and Russo charge into a bar – a bar by the way with an entirely black clientele, who Doyle delights in abusing – to seize whatever drugs people seem to have on them. It’s a basic clean-up and shakedown – but hours later you can be sure it will be look nothing happened there. Similarly, the film’s end credits reveal all involved basically dodged charges (except for the patsy for the smuggling of course), while the cops got transferred. We’ve got one small win at the cost of the lives of at least five lives.

I seem to change my mind on The French Connection every time I see it. Sometimes I think it’s not that different from a host of other police actioners released at the same time (add Bullit to that list). At others, I get gripped by its edgy mise-en-scene and Friedkin’s challenges to conventional morality. And I guess, a film that can make you switch your mind constantly, should be seen as some sort of classic.