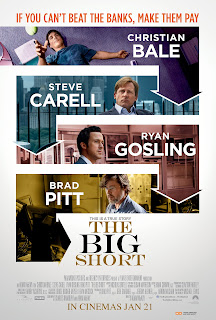 We all experienced the financial crisis of 2007, but very few of us actually understand it: above all perhaps, what the hell actually happened and why. That’s what McKay’s film – somewhere between drama, satire, black comedy and tongue-in-cheek infomercial – tries to resolve. Adapting a book by leading financial journalist Michael Lewis, The Big Short charts the whys and wherefores of the collapse, by focusing on the money men who saw the signs of the impending crash and bet against the booming economy.

Those men (and they are all men of course) are played by a series of actors enjoying themselves thoroughly playing larger-than-life characters who it’s never entirely clear if we are supposed to empathise with, sympathise with, cheer on or stand aghast at while they make fortunes from the ruin of others. I’m not sure the film does either though.

Christian Bale is the eccentric hedge fund manager whose analysis predicts the crash and takes eye-watering investment charges that will pay off thousands of times over when the crash comes. Ryan Gosling is a banking executive who understands that analysis and robs in Steve Carrell’s hedge fund manager to similarly invest to cash in (Carrell’s character, for all his misanthropic oddness is the only one truly outraged at the corruption in the system that will lead to the collapse). Brad Pitt is the retired trader roped in for “one more job” by young traders Finn Wittrock and John Magure to make their own bets against the house. They too will eventually realise the huge impact this will have on people – but are powerless to get anyone to listen as they try and warn against the pending disaster.

McKay’s film, with its tightly-controlled but surprisingly effective off-the-cuff feel (it’s stuffed with neatly edited jokes, straight to camera addresses and a constant running commentary from the characters on the accuracy – or otherwise –  of outlandish moments), may sometimes have the air of a slightly smug student film, but what it does well is explain the financials. If you were unsure about what CDOs, AAA ratings, Quants, credit default swops and sup-prime mortgage were before the start, you’ll have a much better idea later. Neat inventions describe this: from narration, to graphics, to Jenga blocks to famous people (Margot Robbie, Anthony Bourdain and Selena Gomez among others) popping up to glamorously put things in other contexts.

The Big Short does this sort of thing rather well. Sure, it’s got a “lads” feeling to it – there is no “for the girls” equivalent to Margot Robbie in a bath explaining sub-prime mortgages – and the entire dialogue and pace of the film has a frat-house wildness that I suppose does reflect the tone of many of these financial institutions, which were little better than sausage parties. But it presents its ideas nicely and has some good jokes. The verité style McKay goes for is more studied than it natural – and it’s hard not to escape the feeling that the film is very, very pleased with itself, so much so that it’s not a surprise both his follow-up films  double down to various degrees on the slightly smug, self-satisfied liberalism here that sees those in power as corrupt, greedy, fools or all three and everyone else as innocent victims.

Where the film is less certain is exactly how it feels about its central characters. In other words, it doesn’t always turn the same critical eye on these people profiting from a disaster that will lead to millions losing their homes (the millions are represented by a single immigrant family). Brad Pitt may reprove his young charges from celebrating gains that will be the losses of millions of others. Steve Carrell gets several lines berating the callous, short-sighted greed of the banks. Christian Bale’s character is appalled by the “you scratch my back, I’ll scratch yours” relationship between banks, investment ratings agencies and insurance companies, all working together to keep artificial profits up. But the film still wants us to celebrate as these plucky outsiders and weirdoes clean out the house and carry home cartloads of cash while the casino burns down.

Basically, the film is all good fun but gives us little to actually care about. It’s highly influenced by the gonzo macho representation of this world Martin Scorsese’s The Wolf of Wall Street gave us, but far less skilled than that film in presenting its players as the childish, amoral vacuums they are. Furthermore, it does far less to really look at the impact of what it’s doing: in fact, it spends so long delighting in how it tells the story, it doesn’t show us what happens. It dwells at the end on abandoned trading floors and closed banks, like the fall of the Roman Empire, but finds no time at any point to hear from a real person who lost their home.

Perhaps because the real impacts are too depressing – and would have made it impossible to feel the triumphal buzz the film wants from seeing its heroes vindicated and the smug assholes we’ve seen from the banks get egg on their face. It might have felt a lot less funny if we had seen even a closing montage of the real victims and the human impact.

It’s where The Big Short falls down and why it feels in the end like a student film made on a huge budget. It nods its head at real mature themes but actually isn’t really interested in them at all.