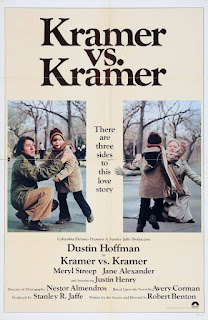 Kramer vs Kramer is a near perfect example of how time changes the perception of a film. On its release, it was the smash-hit of the year, scooping five Oscars. It took a sympathetic look at divorce and explored the then unthinkable idea that a single father could find fulfilment in taking on the woman’s role of caring for a child. Today, it’s more likely to be seen as a thinly veiled attack on feminism and a promotional video for Fathers4Justice. But a film can be a warm celebration of a father building a relationship with his child and an implicit criticism of women who want it all.

The film opens with Joanna Kramer (Meryl Streep) tucking her 7-year-old son Billy (Justin Henry) into bed, telling him she loves him, and then walking out of her New York apartment for good. She tells husband Ted (Dustin Hoffman) – a workaholic advertising executive – she is deeply depressed and has to find what she wants from her life. Ted, a loving but distracted father, has no idea either how to raise his son or run a household. At first, he resents Billy for distracting him from his career, just as Billy resents him for being unable to care for him as Joanna could. Eventually though, Ted and Billy build a loving relationship, with Ted placing Billy’s needs first. At which point Joanna returns and demands custody, a clash that will lead to the courts.

Benton’s film, adapted from a successful novel, is shot with a chamber-piece richness by Nestor Almendros and signposts its arthouse credentials with a Vivaldi string score. It’s superbly acted. Hoffman (winning for Best Actor) is hugely committed, running a gamut of emotions from anger and despair to a joyful devotion for his son. Streep won Best Supporting Actress as the deeply-toen and conflicted Joanna. Hoffman and Benton draw superbly natural work from Justin Henry as Billy, an unaffected, completely unmannered performance. Benton marshals these three actors through a series of simply shot but often surprisingly affecting scenes, alternating between raw hurt, anger and tender forgiveness.

But this is a film that needs a sister film. Specifically, one that shows events from Joanna’s perspective. Although the film – at Streep’s insistence – tries to avoid demonising her feminist desire for more in her life than cooking and cleaning, it still gives short shrift to her departure. With the film’s focus on the heart-warming relationship between father and son, it’s very hard not to implicitly see Joanna as first a selfish abandoner and then a hypocritical antagonist trying to steal Billy. There is little attempt to not stigmatise Joanna as, on some level, a bad parent.

For all the film opens with a long hard look at Joanna’s face, struggling with the conflict between her depression and leaving her beloved son, there is no real effort to explain or understand what motivates Joanna to do the things she does. There are some half-hearted justifications very late in the film, during its courtroom sequences – but these only dip lightly into any turmoil Joanna must have been feeling. Worst of all, it’s all presented as something Ted has to learn to “forgive” rather than understanding it was a crisis he played a role in causing.

The film’s main focus is on Ted learning to become a father. Ted is a classic workaholic dad of the 1970s. He stays late at the office boozing with his boss, has literally no idea about Billy’s everyday schedule and is so inept at home that cooking French toast is completely beyond him. He has no idea about how to enforce rules with Billy, alternating between showering him with ice cream to keep him quiet and then vainly trying to re-enforce rules. (In a great scene, Billy slowly and deliberately sees how far he can push these rules as he first refuses dinner, fetches ice cream from the freezer and then starts eating it, all while Ted lamely states “Don’t you dare do that” – it ends of course with mutual screams of “I hate you”.)

What Ted does is learn to become a parent. Or rather, learn how to become a 1970s mother – since it’s a joke made time again that he is the only man dropping his son off at school, taking him to the park or attending his school play. Benton’s film takes some decent pot shots at the poisonous masculine world of work, as Ted eventually loses his job for letting his single-minded focus shift towards his son – his boss offers no sympathy at all for a man whose mistakes are due to his distraction by “woman’s work”. And the Ted at the start of the film would have agreed.

The relationship between Hoffman and Henry is beautifully played, a gently paced but very naturally flourishing of love and acceptance between two people who have had their lives shattered in different ways. The Ted we met at the start could never have run several blocks to the emergency ward, carrying an injured Billy (shot with a one-take urgency by Benton) – and then point-blank refused the doctor’s suggestion he needn’t bother staying with his son while the wound is stitched up. That Ted wouldn’t have taught Billy to ride a bike or helped him learn his lines for the Halloween play. For all its dated attitudes at times, the film deserves praise for the way it stressed that men could – and should – be this involved in the lives of their children.

But it’s not perfect. The final act, with the return of Joanna, sees both parents gearing up for a paternity battle– and having watched Ted and Billy spend nearly an hour and 20 minutes build a heart-warming relationship, we know where our sympathies lie. Even at the time, lawyers denounced the viciousness and one-sided result of this court case, which seems inexplicable given these two parents live only a short-distance apart with similar salaries. Not that it matters as the film ends with a puff-piece Hollywood fiction moment, as Joanna bravely sacrifices her custody because she recognises she can’t take Billy from his home.

Of course, what the film doesn’t do is acknowledge that Joanna spent essentially seven years doing the sort of all-consuming parenting Ted has only just discovered in the last 18 months. Neither does it do much to avoid suggesting Ted taking these tasks on is an astonishing act of character, just as Joanna abandoning them is an act of calculated selfishness. That’s not to attack the obvious love Ted discovers for his son. He even – eventually – confesses to his son that Joanna’s leaving was his fault for taking her for granted. But the film is so taken-up with the (admittedly beautifully done) relationship between father and son, that it neglects any exploration of the wife and mother beyond her (twice) being a cataclysmic event in their lives.

But it’s a film of its time. And in trying to at least show a divorce where no one was too much at fault and stressing a father could be as much of a parent as a mother, it was trying to do a good thing – even if it sometimes looks like an elderly relative who clumsily says something offensive while trying hard to be open-minded. The three leads are superb and the film has some genuinely heart-warming moments. It looks more and more flawed at times today, but this was trying to do something very daring. And nothing dates worse than daring.