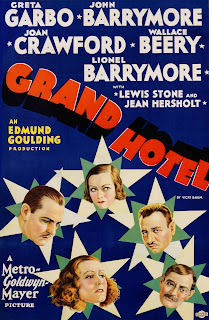 Grand Hotel: “People coming, going. Nothing ever happens”. Of course, despite those opening remarks by war-scarred veteran and permanent resident Dr Otternschlag (Lewis Stone), nothing could be further from the truth. In this, one of the first “All-Star-Extravaganzas” (every MGM mega-star in one movie!) the eponymous Berlin hotel is the host to an ocean of drama over the course of one twenty-four hour period. Scooping an Oscar for Best Picture (setting a surely-never-to-be-equalled record of being the only Best Picture winner to only be nominated in that category), Grand Hotel was a huge hit, and great-big-old-fashioned soapy fun.

Confidently directed by Edmund Goulding, the film threads together its plots very effectively, moving smoothly from star-to-star. The five stars take up nearly 90% of the dialogue just by themselves (with all those egos there wasn’t time for anyone else to have so much as a line) but what stars: three then-and-future Oscar winners and two legends in John Barrymore and Garbo.

Each of them has more than enough to sink their teeth into. Garbo is a maudlin ballerina, teetering on the edge of depression, who falls in love with Raffles-like jewellery thief Baron von Gaigern (John Barrymore). The penniless Baron – who steals to live – befriends Otto Kringelein (Lionel Barrymore), a deceptively spry old-man, actually suffering from a terminal disease, using his savings to see how the other half lives. Kringelein’s former employer Preysing (Wallace Beery) is desperately trying to negotiate a merger to save his job. His stenographer is would-be-actress-part-time-glamour-model Flaemmchen (Joan Crawford), who is flirting with the Baron and also befriends Kringelein. Inevitalby there are life-changing consequences.

If you are a sucker for grand, soapy, old-fashioned drama like this, you’ll find much to enjoy in Grand Hotel. The plots it peddles were pretty cliched and predictable even then, but they are delivered by a series of stars at the top of the game who invest the film with every inch of their glamour. They make the hodge-podge of stories work rather well, and the film even manages to pull out a late shock death that’s genuinely a surprise, both in its suddenness and brutality.

But then Grand Hotel is a pre-code film, so it’s not afraid to acknowledge sex exists and violence has nasty consequences. Crawford’s Flaemmchen is a confirmed flirt, not ashamed to accept an invitation to an ‘adjoining’ room with Preysing to secure her job. Neither is the supremely sexy Crawford (light, winning and possibly the best thing in the film) afraid to all but proposition the Baron. Not surprisingly Crawford was worried more censorious States would cut large parts of her role (she was right). But sex still runs through Grand Hotel: the Baron creeps into Grusinskaya’s room to rob here, and ends up sharing the night (and certainly not in separate beds).

As Grusinskaya, Greta Garbo gets possibly her most iconic line (“I want to be alone”) though her matinee idol pose-striking at times more than a little artificial today. However, what does come across is the power of her personality as a performer (like Marlene Dietrich at this time, there is something utterly fascinating about her). In other hands, the role (with its pity-me dialogue giving way to flashes of youthful, passionate abandon) would look a bit silly, but Garbo makes the whole thing work though force of personality alone.

She’s well matched with John Barrymore at the height of his powers as America’s greatest actor. Barrymore has a matinee idol swishness here, a relaxed romanticism that always makes us sympathise with him, even though he’s a self-confessed liar, cheat and thief. This gentlemen thief may be penniless, but he’s far from ruthless: he treats Kringelein with respect, is genuine in his feelings for Grusinskaya (although his repeated assurances that he will definitely make it the train station to meet her tomorrow is enough of a flag that something is bound to go wrong) and despises the bullying Preysing.

As Preysing, Wallace Beery plays the only unsympathetic character (naturally, despite the film’s German setting, he’s the only one with a Teutonic accent) with a bravado that dances just-this-side of OTT. By contrast, Lionel Barrymore (brother to John – and its very nice seeing these two play so many scenes together) is the film’s heart as a sweet, gentle and endearing old man who is just delighted to be living the dream, even if only for a few days.

It’s all shot in a revolutionary 360° set. The hotel foyer, where the film opens, was one of the first completely constructed sets (many films before constructed their sets like traditional proscenium theatre sets) and Goulding’s camera takes advantage of this in the opening sequence by moving fluidly in a series of long takes that introduces each character and sees them first interacting with each other. There are some other striking images, including a Jason Bourneish wall climb John Barrymore’s Baron carries out to bridge the gap between one balcony and another – although many of the scenes in hotel rooms go for traditional straight-on set-ups.

The film is focused on being a grand entertainment – and, to be honest, little more. Perhaps that’s why, despite being set in Berlin in 1932, there is no mention of any events in the country at that time. Even more surprisingly, there is no mention of the depression – despite it surely being a major factor in Preysing’s desperation, the Baron’s loss of his wealth and Flaemmchen’s need for a job. But that would add weight to a film that wants a light, fun tone. Grand Hotel has inspired a legion of Mills and Boon style stories. It might look an odd Best Picture, but it’s had plenty of influence.