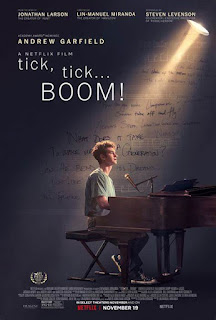 When an artist dies young, you also mourn the loss of all the art still to come. There is an added tragedy when – like van Gogh – the artist dies on the cusp of achieving the recognition and respect they have toiled for so long to achieve. Jonathan Larsen spent over a decade struggling to get his work performed on Broadway – only to die of an undiagnosed heart condition the night before the previews for Rent (the musical that would win him a stack of posthumous awards, including a Pulitzer and a Tony) opened. Miranda’s film is a heartfelt, joyful celebration of Larsen’s life based on Larsen’s own autobiographical one-man rock musical.

Tick, Tick…Boom is all about the counting clock Larsen (Andrew Garfield) fears as his life starts to catch up with his own mapped out timetable for success. It’s 1990 and he’s turning 30, with his rock musical Superbia still only a glint in a workshop’s eye. As he keeps reminding us, at 27 Sondheim had already staged West Side Story. Is Larsen’s chance of making a success of writing musicals ticking away? Should he build a business career, like his school friend Michael (Robin de Jesús) has in advertising? Should he accept the offer of his girlfriend Susan (Alexandra Shipp) to give up on New York and start teaching in Massachusetts? Or should he keep powering away at his dream?

Lin Manuel Miranda has talked openly about how Larsen’s revolutionary work on Rent changed his understanding of what musicals could be. To him – and many others – Larsen is a key figure in the history of the American musical, paving the way to some of the great landmarks of the 21st century. Miranda’s film is soaked in a deep love for both the work of Larsen and musical theatre itself. This is a film made by a man who defines himself by his love for everything musicals – and it’s a love that echoes in every single frame of his film.

Miranda was the perfect man to direct the film – after all, perhaps only Hamilton has had as much revolutionary impact since Rent (just like Larsen, Miranda spent years toiling to get it staged). Working with screenwriter Steven Levenson, Miranda expands the original one-man musical (later versioned into a three-actor piece after Larsen’s death) into a beautifully assembled testament to a crucial few months in the life of its subject, as he subconsciously starts the inspiration that will lead (eventually) to Rent. The film takes the original score for Tick, Tick…Boom and complements it with other Larsen songs and material from Superbia to develop a rich, emotionally moving tapestry that brings Larsen storming vividly to life.

And a lot of that life comes from Andrew Garfield’s revelatory performance. Bearing a striking resemblance to Larsen, Garfield’s performance has an energy, litheness and openness to it, to a degree we’ve not seen before. His singing and dancing are graceful, dynamic and impassioned. He’s emotionally open, tender, delicate – but also, as so many artists must be, sometimes selfish, demanding and self-obsessed. It’s a performance of great joy and humour, making it even more moving to remember that ticking clock is literally counting down Larsen’s life. But this is not a tragic performance: instead it is a vibrant celebration, performed by an actor at the top of his game.

Garfield delivers wonderfully in the many songs, most of them unfamiliar. Tick, Tick…Boom is a little known musical – but Larsen’s sudden death gives it a prescient tragedy he was totally unaware of when he wrote it: he meant it was a clock counting down the end of his youth, but we know it’s actually knocking down the seconds of his life. Miranda stages the songs with all the scintillating freshness of a Broadway musical, with imaginative choreography, energetically engaged performances and at times a powerful emotional intimacy that delivers real impact.

It all works so well because of that love for musical theatre that it is dipped in. The cast is stuffed with cameos from Broadway actors – the song Sunday uses a virtual Who’s Who of the cream of Broadway – and Miranda places Larsen’s music at the very heart of the movie. It’s a film directed with a great deal of skill, but not a showy or flashy distraction. Instead, creative decisions in scenes are subordinate to the songs – so some take place in a realistic setting, some in a staged recreation of Larsen’s original performance of Tick, Tick…Boom, others in a heightened reality somewhere between a dream and a fantasy. Miranda’s trick is to make these contrasted styles all feel part of the same whole – and the joy with which all are filmed (even the sadder moments) is essential to this.

And there are some powerful moments of emotion here. Bubbling throughout the story is the AIDS crisis, which has literally destroyed the lives of several of Larsen’s friends. It is to have a very personal impact on his best friend Michael (a heartfelt Robin de Jesús). Larsen’s dwelling on this plague, where many blamed the victims, sees him scribble notes for key lines that will build Rent (Miranda has these appear on screen in hand-written text). Part of the self-criticism of Tick, Tick…Boom is Larsen acknowledging that his selfish desire for success as a protégé blinded him to the suffering of some of those closest to him. While I would have liked more direct tying of Rent into the film’s conclusion, this deconstruction of Larsen’s laser focus is well done.

Above all, Tick, Tick…Boom works because it is made so clearly by people who love musical theatre, for people who love musical theatre. The performances are sublime, especially Garfield who has never been better or more engaging, with de Jesús and Alexandra Shipp also excellent and Vanessa Hudgens standing out among the rest. Miranda’s film is a strikingly well-made and heartfelt labour of love, that will reward rewatching and uncovers the overlooked work of a major talent who died way too young.