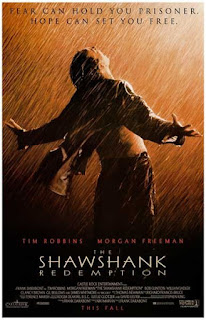 You’d hardly believe it… but the film now routinely listed as one of the most beloved films of all time was actually a box office bomb. The Shawshank Redemption tops many public polls of great films. It’s been the number one film on IMDB practically since the site was built. What is it about it that has had such a connection with people? Perhaps it’s because, under the multitude of genres the film touches on, it’s a film about the strengths of two things crucial to all of us: hope and friendship.

In 1947 Andy Dufresne (Tim Robbins), a mil-mannered bank manager, is imprisoned for life in Shawshank State Prison for the murder of his wife and her lover. For the next twenty years, Andy will get busy living rather than get busy dying, finding what moments of warmth, friendship and hope he can from rebuilding the prison library to helping his fellow prisoners. But he’ll also face daily danger, from sexual assault from brutal fellow prisoners to the machinations of corrupt warden Samuel Norton (Bob Gunton). During his time in prison, his confidant and closest friend is Red (Morgan Freeman), a smart fixer who has spent decades failing his parole hearings.

This is possibly the finest Stephen King adaptation ever made – the other major contender, Kubrick’s The Shining, has the disadvantage of being loathed by the author – perhaps because it captures both the Dickensian sprawl and sentiment of King’s best work, mixed with his edge and danger. There is a charming shaggy-dog story element to The Shawshank Redemption that helps make it delightful to watch. Not only that, it carefully builds up empathy for two people, both of whom are convicted murderers. It manages this as it turns its prison setting into a universal metaphor for the helpless victim trapped in a system.

Because, for all the pious spouting of the Warden (Bob Gunton at his most hypocritically vile), Shawshank is a place devoid of justice. On Andy’s first night in prison, a fellow new arrival is beaten to death for refusing to stop his terrified whining by head guard Hadley (a terrifyingly blank and amoral Clancy Brown). Abuse of power is pretty much endemic in Shawshank – as Andy discovers as he witnesses the guard’s casual brutality, and his accounting skills drags him into building the corrupt financial empire Norton runs with the slave labour of the prisoners.

Shawshank is all about squeezing hope out of people. It’s nothing less than a dystopian hell hole where there is no right and wrong. That’s Andy’s big impact on the place: for all its hellishness, he helps create some sort of freedom. Darabont wonderfully establishes the crushing dehumanising of the prison, so that moments where people can pretend for a moment they are free carry even more power. Whether that’s drinking cold beers on a freshly tarred roof (inveigled by Andy in return for sorting out Hadley’s inheritance tax problems) or listening to Mozart over the prison speakers. It’s there in the rebuilding of the library as a place prisoners can feel pride in or Andy coaching others to gain their school diplomas. And we feel every moment of it with them.

And that’s not even thinking about how brutish some of the other prisoners are. Much of Andy’s first few years in prison see him dodging gang rape from a group of particularly violent prisoners (led by a sneeringly vicious Mark Rolston). For that opening act, Andy is tossed as low as you can go, Darabont pulling no punches on vicious beatings or terror he has to endure. Hope becomes more powerful when it grows out of despair.

But that suffering is crucial because it gives even more warmth and power to the friendship between Andy and Red. Shawshank Redemption is a beautiful platonic love story, about a deep and lasting bond between friends. The warmth, regard and affection between these two characters, who discover how much they have in common is beautifully paced and supremely engaging. 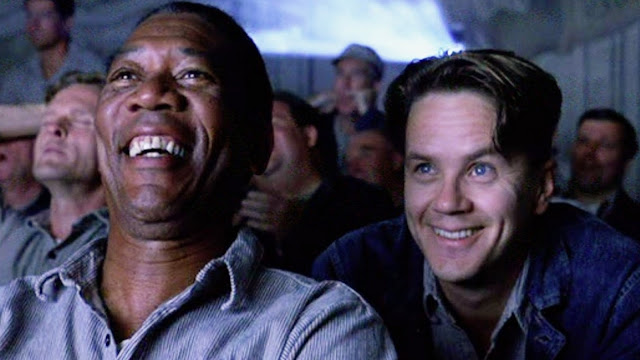 It’s also helped a great deal by two fabulous performances from the leads. Tim Robbins’ baby-faced inscrutability is perfect for a man who may or may not be a murderer, and looks like he both needs protection and also has the internal strength to see him through anything. You can see why Red thinks, on first meeting him, he might be weak – but also never doubt for a moment that he’s strong enough to wade through the filth of Shawshank.

Opposite him is an iconic, beautiful performance from Morgan Freeman. Darabont’s film uses Freeman’s gorgeous tones to perfection through Red’s narration. Freeman of course gives Red a wonderful world-weary wisdom but also a sort of innocence. Red has worked out perfectly how to bend the rules of the prison – so confidently that he’s an awe of someone who finds out a way to break them completely. This is some of the actor’ finest work, making Red witty, shrewd, self-aware but also in some ways touchingly naïve and scared that he could never survive outside the prison.

Institutionalisation is a major danger in prison: it’s part of the danger of giving up hope, of accepting the status quo that your whole life is those four walls. But then, it’s also the terror of leaving a regimented world, where some decisions are made for you and you can always know your place. One of the film’s finest sequences covers the tragic end for Brooks, wonderfully played by James Whitmore, an educated and respected librarian inside but an irrelevant, old man outside, day-dreaming of one day being allowed to ‘go home’. It’s a danger Red knows could hit him too – after all he’s the best fixer inside, but a man with no such purpose outside.

Darabont’s film understands it. In fact, the film itself encourages the viewer to get a bit institutionalised themselves. The audience enjoys Andy’s triumphs, the commadre between the prisoners, the fun of the tables subtly turned. So much so the viewers can forget that this should be a film about getting out of this hell. (In fact you can argue, after a time, it makes prison look a little like an eternal boys camp). It shakes the viewer up as much as Andy when this status quo we’ve started to enjoy gets shaken up by the arrival of young thief Tommy (Gil Bellows). It’s a moment where the viewer realises that the film made a subtle shift from being a prison drama to a buddy movie where our heroes eek out little wins from the system: not least because this is the point when the system reminds Andy (and us) that it’s not to be messed with.

Darabont’s film reforms into a wonderful caper movie, a super-clever heist, covering Andy’s eventual escape. This is classic Ocean’s Eleven stuff and has the double delight for the audience of paying off Andy’s mistreatment and injustice and also allowing us to really enjoy how ingenious he is. Then the film switches gears effortlessly on a sixpence after this moment of delightful triumph with a low-key, tender, Red-focused coda which taps us straight back into the beautiful warmth of that friendship.

Perhaps this is why The Shawshank Redemption is so universally beloved. It’s a prison film and a buddy film, it’s a caper and it’s a film about a crushing system, it’s a film of hellish suffering and deep hope, all framed around a wonderfully judged, life-affirming friendship. Darabont’ script and direction is perfectly judged and immensely moving and the acting is perfect. It works so well because it constantly brings us back to feelings of hope and friendship. Those are universal feeling and they are beautifully presented in the film. We live with Andy being put through the wringer, and relate to him so much, that we feel as cleansed by the rainfall as he does. It’s that which lies at its success; and the brilliant way it gets you to invest in the fate of its characters.