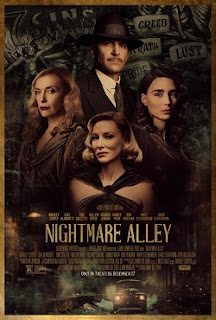 There isn’t any magic left in the world, it’s all show and tricks and no wonder. Nightmare Alley is del Toro’s follow-up to his Oscar-winning The Shape of Water and you can’t not admit it’s a triumph of style. It’s a glorious fusion of film noir and plush, gothic-tinged horror. There is something to admire in almost every frame. But it’s also all tricks and no wonder. There’s no heart to it, just a huge show that in the end makes nowhere near the impact you could expect.

In the late 1930s Stanton Carlisle (Bradley Cooper) is a drifter with a dark past, who is recruited as a labourer in a travelling carnival. Learning the ropes from freak show owner Clem (Willem Dafoe), he’s taken under the wing (in every sense) by mesmerist mind reader Zeena (Toni Collette) and taught the tricks of the art (observation and careful word codes using an assistant to guess names, objects and other facts) by Pete (David Strathairn). Eventually Stanton and his love, circus performer Molly (Rooney Mara), head to the big city where, after two years, Stanton reinvents himself as celebrity mind-reader and medium. There Stanton gets involved with psychiatrist Lilith Ritter (Cate Blanchett) in a long con where he will use the recordings of her sessions with patients to act as a medium to put them in touch with their lost ones. But is there a danger Stanton isn’t ready for in one of his clients, powerful businessman Ezra Grindle (Richard Jenkins)?

Nightmare Alley looks fabulous. But it’s hellishly overlong and curiously uninvolving. It’s like Del Toro fell in love with the whole project and forgot to search for the reason why somebody else would love it. It’s a strangely unshaped film, alternating between long, loving scenes glorying in the dark mood, baroque performances and design but then makes drastic, swift jumps in character psychology that constantly leaves you grasping at engaging with or understanding the personalities of its characters.

Its design is faultless though – it’s no surprise that its only Oscar nominations outside the Best Picture nod were all in technical categories. Dan Lautsen’s cinematography is inky black, with splashes of all-consuming colour. It’s a marvellous updating of film noir, with deep shadows spliced with angles reminiscent of Hammer-style horror. The production design is a labour of love, the carnival sets a hellish nightmare of unsettling shapes, forms and structure contrasting with the art deco grandness of the big city. The design is pretty much faultless, a real labour of love.

But the same effort didn’t go into pacing and story. This is a slow-moving, self-indulgent film, that frequently seems to be holding itself at arm’s length to make it all the easier for it to admire itself. It looks extraordinary, but it’s a frequently empty experience, more interested in mood and striking imagery than character and emotion.

Bradley Cooper gives a fine performance as Stanton. He has an air of cocksure charm, and Cooper skilfully shows this is largely a front of a man who, when push comes to shove, is capable of sudden and unflinching acts of violence. We get an early hint of this when he reacts to being struck by an escaping circus freak with unhesitating brutality. It recurs again and again in the film, and Stanton proudly states his avoidance of alcohol with all the assurance of a man who knows the bottle could unleash dark forces that he could never control. Cooper is vulnerable but selfish and above all becomes more and more arrogantly convinced of his own genius and bulletproof invulnerability, so much so that he drives himself further and further on into self-destruction.

There is some rich material here, so it’s a shame that for all that we never really seem to be given a moment to really understand who he is. Much has to be inferred from Cooper’s performance, since the film seems content to state motivational factors – troubled parental relationships, greed, ambition, a desire to make something of himself – without ever crafting them into a whole. Stanton remains someone defined by what he does. 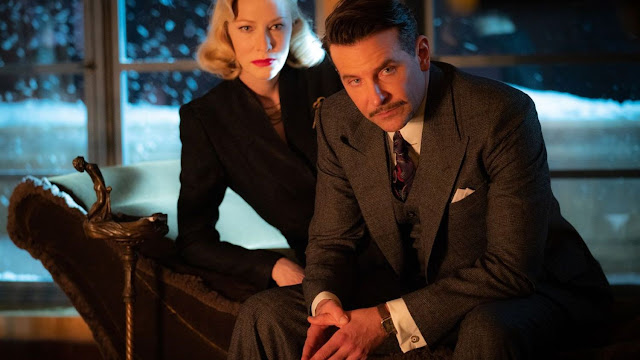 And Stanton is the only character who gets any real oxygen to breathe, with the others largely ciphers or over-played caricatures. Rooney Mara as his gentle love interest is under-developed and disappears from the film for long stretches. Cate Blanchett gives a distractingly arch performance, somewhere between femme fatale and Hannibal Lector and is so blatantly untrustworthy it’s never clear why Stanton (an expert reader of people!) trusts her completely. Richard Jenkins is miscast as a ruthless businessman, lacking the sense of danger and capacity of violence the part demands.

Most of the rest of the cast are swallowed by the long carnival prologue, that consumes almost a third of the film but boils down to little more than mood-setting and a repeated hammering home of a series of statements that will lead into a final scene twist (and I will admit that is a good payoff). The carnival seems like a self-indulgent exploration of style, and several actors (Perlman, Povinelli and even Collette) play roles that add very little to the film other than ballooning its runtime.

The earlier section would have perhaps been better if it was tighter and more focused on Stanton and his mentor, well played by David Straithairn. I appreciate that would have been more conventional – but it would also have been less self-indulgent and helped the opening third be less of a stylish but empty and rather superfluous experience (since the film’s real plot doesn’t start until it finishes). Drive My Car demonstrated how a long prologue can deepen a whole film – Nightmare Alley just takes a long, handsome route to giving us some plot essential facts, without really telling us anything engaging about its lead character.

It makes for an unsatisfying whole, a cold and distant film packed with arch performances – although Cooper is good – and events that frequently jump with a dreamlike logic. It’s a marvel of design but way too much of a good thing, and constantly seems to stop to admire itself in the mirror and wonder at its own beauty. It becomes a cold and arch study of a film not a narrative that you can embrace. And you can’t the same about many of Del Toro’s other films – from Pan’s Labyrinth to Pacific Rim they’ve got heart. Nightmare Alley doesn’t really have that.