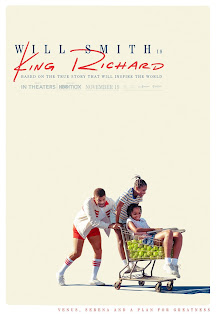 Sports movies have a very reliable formula. There’s the initial promise, early success, adversity, obstacles, a moment of doubt, a renewal of commitment and a final success. I think it’s fair to say that King Richard pretty much hits all the beats you expect. In fact, its pretty much exactly the film you expect it to be when it starts and doubles down hard on the charisma and charm of its star.

King Richard tells the story of how the Williams Sisters, Venus (Saniyya Sidney) and Serena (Demi Singleton), took their very first steps towards dominating the world of tennis, as told through the eyes of their father Richard (Will Smith). Richard Williams had been determined from almost the moment his children were born, that he would never stop working (and push them) to build lives that would take them away from the working-class ghetto he grew up in. Teaching himself tennis coaching, from the moment they can hold a racket the girls are coached. But, being working class and black in a white-middle-class sport, Richard must work night-and-day to win professional coaching and playing opportunities for his daughters. Not to mention, struggling to ensure that they don’t forget their roots or get chewed up and spat out by the sport.

First and foremost, King Richard is a showpiece for Will Smith. The part fits him like a glove: Williams a larger-than-life, force-of-“Will” role that feels about 2/3rds Williams and 1/3rd Smith. With Williams fast-talking patter, never-give-up determination and absolute commitment to protecting his loved ones, the role plays to all Smith’s strengths. Smith gives a quintessential movie-star performance, which to-be-honest often feels like a Will Smith personality role (the modern equivalent of a Cary Grant performance), but is very entertaining because few people are as good at crafting their personae to benefit a movie as Smith is. Smith is heartfelt, earnest, loveable, sometimes slapable, but always a charming guy you root for.

Which is odd, as Richard Williams is a man with a mixed reputation. He was a demanding, argumentative, often controlling presence who irritated and alienated far more people on the tour than he befriended. Some saw him as a self-promoter, others as a man at times causing problems for his daughter’s careers. King Richard doesn’t shy away from showing these qualities – the awkwardness, the temper, the selfishness, the arrogance – but presents them all in the best possible light. The film is purest hagiography and Richard Williams is always vindicated in all his calls.

Awkwardly the film is also determined to give him all the credit for the Williams’ sisters success. Now there is merit in this – and the script was developed with the sister’s input, so it feels a bit presumptuous to get angry on their behalf. The sisters would never have become what they are if their father had not put rackets in their hands so young and invested hours in training them. Similarly, they would not have been as fully-rounded people without his constant mantra about family, humility and hard work. But also, they did have quite a bit of talent themselves – and certainly they profited from lessons they picked up from the other coaches they worked with.

However, one of the points King Richard is gently making – and it is gently made, as if the film was worried its crowd-pleasing potential might have been affected if it banged this drum too hard – is that Williams had to be a domineering figure because he was fighting against a racial divide in the sport. He feels out of place in the tennis country clubs because he is. No one else on the junior tour is anything other than white and well off. Every coach and trainer is applying methods that have worked for affluent middle-class athletes, without considering any adjustment might be needed for two young women coming from a totally different background.

You can argue the hagiography is partially a course correction from years of the only black father and coach on the tour being denounced as uppity, loud-mouthed, self-obsessed and intrusive. Its still made clear he shares these traits with many other tour parents, but adding to it a massive dose of supportive parenting. There are moments when the film addresses how Williams’ obsession that he knows best might just be starting to run the risk of alienating his daughters: in particular Aunjanue Ellis delivers a blistering late speech (which probably got her an Oscar nomination by itself, so compellingly is it performed) where she lays out in no-uncertain-terms Williams many character flaws and damaging behaviours. (Coincidentally the film’s most compelling dramatic scene).

Maybe a bit of hagiography is what we need from a film designed to be an uplifting, triumph against the odds and celebration of one man’s fatherly love and devotion to give his daughters a chance to change their stars. The film is professionally directed by Green and some of the titbits of the sisters early training (throwing American footballs to build service strength among others) is fascinating.

The film is probably at least twenty minutes too long and starts at some points to repeat the same beats again and again. It doesn’t really do anything new and is exactly the sort of film you could predict it being. But it has some good performances, Smith is at the top of his game, and it is an enjoyable, if predictable, feel-good watch.