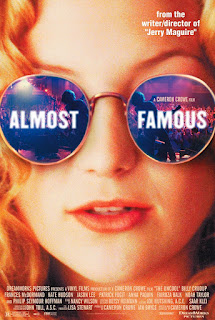 Cameron Crowe fictionalises his teenage years in the warm, affectionate Almost Famous, an endearing, heartfelt riff on the golden years of Rock ‘n’ Roll, when it felt like music could change the world and making the front cover of Rolling Stone was the greatest thing ever. Patrick Fugit plays William Miller (the Crowe substitute), a precocious 15-year-old would-be-music journalist recruited by Rolling Stone to write an article on Stillwater, an up-and-coming new band. Miller adores the music scene and is soon smitten with the lifestyle, Stillwater’s charismatic guitarist Russell Hammond (Billy Crudup) and most of all “Band Aid” (muse not groupie) Penny Lane (Kate Hudson).

Crowe’s film is a glorious reconstruction of the rock and roll scene of the early 70s – and I can imagine anyone with fond memories of it will find much to love here. It’s not just the fashions and hairstyles, but the glorious capturing of a mood. The whole film is a celebration of a time that felt freer and more idealistic, where the actions and words of a rock band could feel like the most important, beautiful thing in the world. The film is not just nostalgia but also a celebration of a mood of hopefulness that embodied an era.

It’s also a coming-of-age story, as a boy-becomes-a-man. Patrick Fugit is very endearing as a kid no one can quite believe is 15, even though every moment seems to hammer home his fresh-faced innocence. But then it’s not a complete surprise since, thanks to his strong-willed mother having moved him up a class at school and led him to believe he is older than he is. Nevertheless, this is the sort of trip that shapes someone, finding friendship, love, belonging, betrayal, righteous anger and acceptance along the way. All of this is backdropped by the shift of rock and roll becoming something corporations used to make a lot of money.

Stillwater are just on the cusp of this, still clinging to the fun of bussing from gig-to-gig, enjoying the mood, the songs and (of course) the girls. The film is also a celebration in a way of their coming-of-age, the tour starting in a ramshackle bus and ending on a sleek private jet, with accommodation switching from the bus to plush hotels. And along the way, they are trying to work out what they hell they are doing as much as William is. Perhaps that’s why the film feels like it captures the era so well – wasn’t everyone flailing around in the 70s trying to work out if they belonged to the hedonism of the 60s or what would become the Reagonism of the 80s?

But it’s still rock ‘n’ roll, best embodied by Billy Crudup’s charismatic turn as Band icon Russell Hammond. Crudup is all grungy magnetism and shuffling emotional gentleness under the surface of rock star swagger. Not that it stops him from moments of egotism, selfishness and pomposity. You can see why tensions are sometimes high in the band, with the rest of its members often seen as jut Russell’s support group (a band t-shirt causes fury when it shows Russell in the foreground with the other four as shadowy outlines behind him). Russell takes William under his wing, perhaps because he recognises the youth and fragility in William. Or maybe he just likes the hero-worship.

Because one of the dangers of getting close to these stars is getting sucked into hero worship. William is after all a journalist who needs to maintain objectivity. He’s even warned about it by his mentor, fabled music writer Lester Bangs (Philip Seymour Hoffman in a charismatic cameo) that the biggest danger is succumbing to the charms of the celebrity: these are after all, people who have made it their mission in life to be liked. They’re going to be good at it. 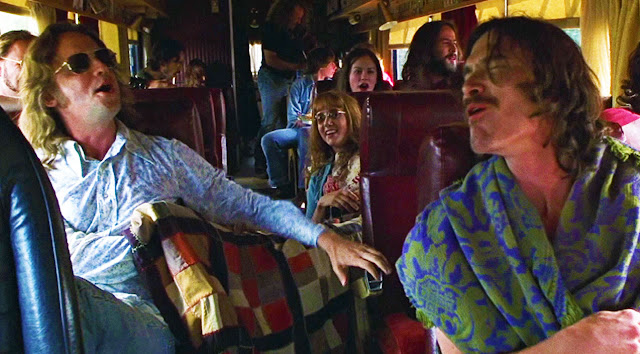 Getting in their airspace can be a dangerous place, as discovered by leading Band Aid Penny Lane, played with a luminous, radiant warmth by Kate Hudson. Penny is a devoted fan, enraptured with being part of the scene and with her self-proclaimed role as muse to the artists. Based on a personal friend of Crowe’s – and, one supposes, his real-life first love – it’s Penny who draws William into this life, looks out for him, cares for him (a favour he is to return in kind). She starts an affair with Russell – but is banished when Russell’s girlfriend rejoins the tour, jokingly traded in a card game with another band for a crate of beer (a reveal Hudson plays with a beautiful mix of devastation and valiant nonchalance). It’s not that Russell’s a bad guy, more that he can’t cope with complexities.

So, you can see why William’s Mum – played with a larger-than-life mix of bullish determination, smothering love and control-freak determination by Frances McDormand – is so worried about him. It’s a sign of the film’s overall warmth (and Crowe’s well-adjusted personality!) that McDormand’s character is treated with the same affection and admiration as everyone else and the love between mother and son is never in doubt. She is responsible for some of the film’s highlights, not least a phone call to Russell where her natural authority quickly reduces him to the overgrown schoolboy he is at heart.

And Almost Famous is a very funny film, riffing off various true life rock-and-roll road trip stories, from raucous parties to accidental electrocutions, like a slightly straighter version of Spinal Tap. It’s capped by a hilarious near-disaster plane flight, where the end seems in sight, leading to a series of ‘confessions’ that become more and more heated and factious as they go on. It’s a film that shows some of the warts of the characters – just as William’s article eventually will for Stillwater – but also their many, many beauty spots. People make mistakes and hurt each other, but life goes on – and we take the punches, but they don’t define us.

Perhaps that’s a big part of growing up: and it’s a growing-of-age film for three characters: William, Penny and Russell. All three of these characters find themselves drawn together, all of them spiritually so close. They hurt each other, betray each other, but they all love each other. It’s a hopeful message, a glorious celebration of a time and era.