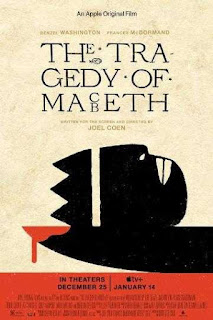 Shakespeare on screen is difficult to pull off. Focus too much on the language and you end up with something more theatrical than cinematic. Zero in on the visuals and you lose what makes Shakespeare great in the first place. That’s not even to mention that films – with their huge audiences – tend to focus on simple, more traditional interpretations of a play that add little to interpreting it afresh. These are all problems avoided by Joel Coen’s The Tragedy of Macbeth which is bloody, bold and resolute and jumps straight into the upper tier of great Shakespeare films. Inventive, dynamic, gripping and excellently acted it succeeds in being both a creative production of the play and something truly cinematic.

Shot in a crisply clean black-and-white, the 4:3 frame frequently filled with rolling mist and stark white light (it’s superbly shot by Bruno Delbonnel), this is a Macbeth set in a Jan Kott inspired Samuel-Beckett-tinged wasteland, with Scotland a bleak, blasted country, its characters leading lives full of sound and fury that signify nothing. The Macbeth’s castle is an Esher like construction of perfectly formed empty rooms, towering walls and arches casting grim shadows and open ceilinged rooms allowing onlookers to observe everything. There are brilliant images: not least the handle to Duncan’s door which is strikingly lit to resemble a knife. Characters frequently emerge from the mist or the darkness to walk towards us and confess their darkest thoughts.

No Shakespeare film has better used set and location since Orson Welles’ Othello – a film this is sharply reminiscent of, with its brilliant use of angles and shade that constantly disconcerts the viewer (even leaving us confused at points on whether we are looking down or up). Coen also seems to have been inspired by Peter Brook’s grimly nihilistic King Lear film, with this Scotland being trapped firmly in a circle of destruction powered by the witches. All three are played by Kathryn Hunter, whose contortionist twisting and ability to switch her vocals on a sixpence from sing-song to a Gollumesque growl make them truly feel of the earth and yet not. Hunter is inspired casting – sometimes representing all three witches in a single schizophrenic body, at others playing all three at once. A brilliant image at one point shows her double reflection in a watery pool, turning her body immediately into a trinity. 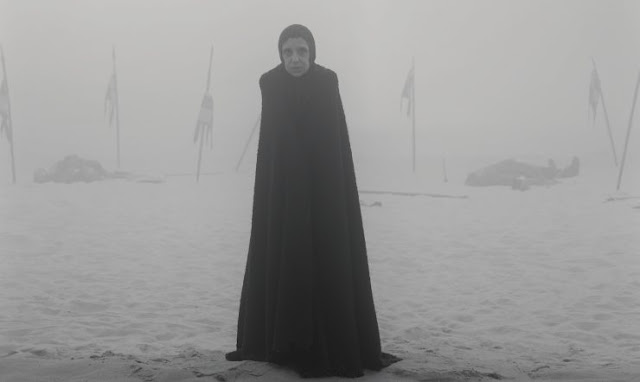 Hunter’s movement is birdlike and agile – fitting since it’s suggested the witches can transform themselves into carrion crows, flying over Scotland picking bones clean of fresh. The first image is the three birds circling the Captain as he walks slowly across a beach to report to Duncan. Later Hunter perches on a crossbeam in another opened-ceiling room, subtly poking Macbeth on to greater monstrosities. There is a cycle of destruction here – and the film’s ending implies all this chaos is bound to start again.

Crucial to this is Ross. Following Polanski’s Macbeth – and again heavily inspired by Jan Kott – Alex Hassell’s unctuous Ross, ingratiates himself with all while happily engaging in acts of brutality. He personally executes Cawdor (by beheading), joins Banquo’s murderers, shows the way to the sacking of Macduff house and hands Malcolm both the crown and Macbeth’s severed head. But Coen takes it further again: rather than a cruel opportunist, this Ross seems to be an agent of the witches – or maybe even a witch himself. Hassell’s costume, with its curiously feminine robe and wing-like arms, echoes the witches and Ross moves smoothly from side-to-side even in the final acts, planting seeds of further destruction (including further implied murders) and collaborating directly with the witches to restart the cycle at the end.

All this makes Macbeth and Lady Macbeth at times feel like rather tragic puppets at the heart of a terrible cycle of events they cannot control. It certainly fits with Denzel Washington’s balanced and intelligent performance in the lead. While Washington doesn’t mine as much weight and meaning from the text as the great stage Macbeths, he gives his line readings an unstudied naturalism and a dynamic and thoughtful rhythm (even if he is prone a little too much to the “soft-slow/fast” approach). His Macbeth is a weak, indecisive man, happy only when he is in action. Clearly ambitious from the start, he binds himself in knots thinking but, once a decision has been made, has no hesitation. Violence is an instinctive tool – he kills several people with no hesitation and a lightening aggression – but he’s lost without direction. He clings to the crown as if it will somehow give the things he has done meaning. 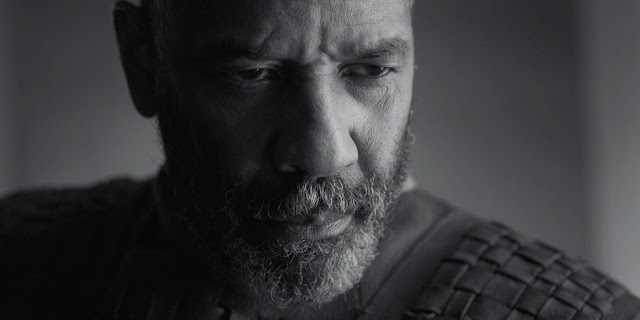 Washington’s performance shifts gears once Macbeth has decided to fully commit himself to those scorpions that fill his mind, becoming an unbalanced mixture of fatalistic and recklessly impulsive. No wonder he has less need for his wife. Frances McDormand is perhaps even better as a Lady Macbeth who sees the crown as her last chance for legacy in a world that has left her behind. McDormand really understands the way to mine nuance from the language. Frequently inpatient with her husband, she is decisive where he is not, but squeamish around violence in a way he isn’t. Both Washington and McDormand manage to suggest a great deal of unfulfilled sadness in the Macbeths, two people in the twilight of their years who pounce on a chance for a last hurrah but find themselves psychologically unsuited for the consequences.

The two leads are at the head of a uniformly strong cast. Hunter and Hassell are both superb. Bertie Carvel is a brooding but honest Banquo. Corey Hawkins a forceful but thoughtful Macduff, played with guilt and wise from the start on Macbeth’s villainy. Moses Ingram brings a lot of warmth to a striking scene as Lady MacDuff. Ralph Ineson’s delivery of the Captain’s speech is spot on. Harry Melling is an immature, stubborn Malcolm.

But the real star here might just be Coen’s direction. The brooding, overbearing beauty of the film is all part of its atmosphere of creeping intimidation and danger. There are some truly striking, haunting images: the flame lit murder of Banquo, a deranged Macbeth fighting a spectral hallucination of Banquo, water pouring down into the flagstones after Macbeth’s final visions of the future, the smoke and mist filled murder of Macduff’s children (a shot of Wellesian brilliance), Lady Macbeth standing before a sheer drop, the imaginative arrival of Birnam wood, Macduff and Macbeth’s final duel in a narrow battlements. This is a punchy, brilliant, beautiful, intelligent and unique reimagining of the play that mixes Shakespeare, visual and has something clear and unique to say about staging the play. Comfortably one of the greatest Shakespeare films ever made.