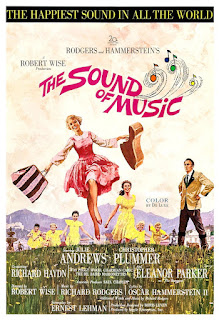 Has there been any film in history that has aroused feelings as strong as this one? Busloads of tourists conduct pilgrimages to Salzburg to follow in its footsteps – it’s a bigger draw than Mozart. Sing-along performances are attended by people in costume who know every nuance of Do-Re-Mi. On the other side, those who loath this musical, do so with the burning heat of a thousand suns, practically cheering the Nazis on or choking back vomit at the opening note of Edelweiss. It was ever thus: The Sound of Music was slaughtered by critics – Pauline Kael called it “the sugar-coated lie people seem to want to eat” – but became a box-office phenomenon, one of the most popular films ever and gilded with Oscars aplenty.

It’s loosely based on the real-life experiences of the von Trapp family. Maria (Julie Andrews), a young novice, arrives at the home of the widowed Captain von Trapp (Christopher Plummer) to serve as nurse for his seven (count em!) children. Von Trapp runs his house (literally) with military precision, but Maria introduces some fun into the children’s life. And, to his surprise, the Captain’s life as he finds himself drawn towards the wholesome and sweet Maria instead of his initial intended, the Baroness von Schraeder (Eleanor Parker). Marriage is inevitable – but then the family finds itself in a terrible position as the Anschluss weds Austria to Germany and the Captain is ordered to take up office in the Nazi navy. Will he do so – or will the family escape over those hills?

You would probably be fair to call The Sound of Music one of the most manipulative films of all time. But then aren’t films supposed to be about manipulating our emotions for effect? On that score you could possibly call it the greatest film ever made. I won’t, but there is a sentimental, feel-good charm to The Sound of Music that – in small doses (and some people watch this multiple times a year – once every few years is surely enough!) – can really hit the spot in the way few other films can. Sure, it tugs on your heart strings with never a trace of subtlety, but basically it’s heart is very much in the right place. It’s a kind, gentle music that, for all its treacle, is a tribute to warmth, love and family. Perhaps that’s why it’s been so embraced by so many.

Even the cast were aware it could all tip over the edge into outright sentimentality. Julie Andrews was worried it might be a little too similar to Mary Poppins (she was right in a way – Poppins is a darker film, but the success of this cemented Andrews in people’s mind as the World’s nanny). Most famously Christopher Plummer overcame huge uncertainty to star, partly to practise his singing for a Broadway musical (as it happened he got dubbed), partly on the promise he could add a tougher edge (no sign that happened). Plummer’s hate-tolerate relationship with the film is famous (he called it The Sound of Mucus) and at several points in it he is all too obviously only just avoiding sinking his head into his hands, but he even he eventually acknowledged any film that moved people as much as this, must have done something very right indeed.

It’s that emotional investment people make in this film that lifts it eventually above criticism. It’s a long film, with a slender plot. But it mines this plot for every single touch of emotional investment. It’s the ultimate triumph of one of Hollywood’s most reliable middle-brow directors, Robert Wise. Taking over from William Wyler (who just couldn’t get interested and left to make the almost diametrically opposite The Collector), Wise successfully keeps the momentum flowing and shoots the film in an economical way that lets the songs do their work. He still finds room for classic shots: that helicopter shot sweeping into Julie Andrews running up the hills is just about perfect (Andrews was literally blown over every time by the helicopter, explaining the sudden jump cut edit for her famous twirl and burst into song). Wise’s editing skills really come into play with Do-Re-Mi that cuts the song across several locations and he makes excellent use of a number of Salzburg locations (for which the tourist board thanks him). 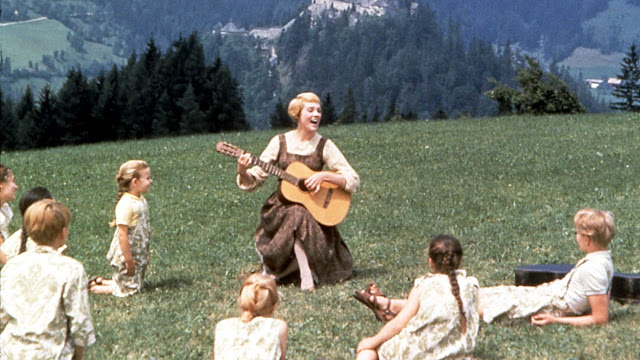 A major part of the film’s success though must surely be directly connected to Julie Andrews. This is a career – perhaps even a life – defining performance. And even the most cynical watcher can’t help but admit Andrews is a superb, gifted performer. Her singing is beautiful, and very, very few performers could have managed to make Maria charming, sweet and someone who want to hug, rather than twee or slappable. Andrews makes you really invest in every single event in the film: she’s hugely endearing (from singing in those hills, to her little stumble of excitement as she runs from the Abbey to take up a job at the von Trapps), she’s completely unaffected and when she’s hurt (by her seemingly hopeless love for the Captain) you just want to give her a hug.

No wonder the children love her. Who wouldn’t? Sure, the film’s weakest beat might well be its romance between Andrews and Plummer (for which Plummer is mostly to blame), but it captures a wonderful sense of family loyalty and protection. Everyone, at some point, is a sucker for stories where sad and lonely children are introduced to a life where they can mess around and have fun – and get that emotional investment the Captain has (accidentally) denied them. After spending the first two hours of the film getting to know this family and seeing it come together, we feel even more intently their fear and panic at being forced into goose-stepping line with Hitler’s war machine.

The film’s final sequence around the Abbey is also surprisingly tense: the family sheltering behind tombs and trusting in the half-truths of the Nuns and the wavering loyalties of wannabe SA officer Rolfe to make their escape. Wise’s films successfully communicates the stakes. It also mixes in some comedy even here: the final lines going to the Nuns confessing their sins of sabotaging those Nazi cars. All this before we go back to where we started – Maria walking the hills, full of music, this time accompanied by a beloved new family.

It’s that desire to be part of a loving family that perhaps explains why The Sound of Music has been so popular – and why so many people turn to it for comfort time and again. With its heart-warming songs and themes, it’s a warm comfort blanket that makes people feel part of its loving family. You can’t argue against it being manipulative – but that’s the nature of films, and manipulation as effective and good-natured as this is a sort-of triumph of film-making art.