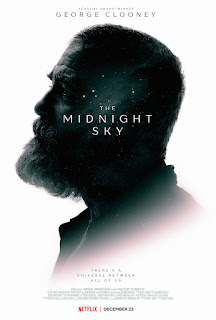 The world has been evacuated after an unspecified radiological disaster, with the survivors bound for K-23, a newly discovered moon of Jupiter capable of supporting life. The only person left on Earth is Augustine Lofthouse (George Clooney), suffering from a terminal illness. He remains behind at an arctic base to warn returning space missions. The returning mission Aether – crewed by Jones, Oyelowo, Chandler, Bichir and Boone – are en route, but to make contact with them Lofthouse must travel across the arctic to a back-up transmitter, accompanied by a mysterious wordless child called Iris (Caoilinn Springall) who seems to have been left behind during the evacuation.

The Midnight Sky is the largest, most technically ambitious film Clooney has directed. Did the focus on the technical aspects mean he took his eye off other elements? Even the ones his previous films have been strong on: dialogue and character. The Midnight Sky looks great and has some impressive effects. But it is a dull film, lacking pace or energy, populated by paper-thin characters and often feeling like a Frankenstein-like stitching together of elements of other, much better, films.

It splits its focus between two story lines: one a survivalist two-hander between Clooney and child actress Caroilinn Springall; the other a “journey home against the odds” space mission. The first carries a little more interest, if only because Clooney manages to brilliantly convey loneliness, isolation, sadness and how terminal illness increases the effects of all of these. There is also emotional depth from his growing bond with Iris: the two of them playfully flicking peas at each other over dinner and his protecting her from the dangers outside. This is shot in some stunning Iceland vistas and shows a competent selection of various traditional survivalist set-ups during the struggle to complete the journey. It’s not exactly original, but at least it holds the interest.

That interest isn’t found in the space scenes – although the lack of originality is. How did Clooney fail to notice that he assembled a terrific cast of actors, but then failed to give them so much as a whisper of a character to play between them. This crew are terminally unengaging 2-D characters, whose dialogue echoes tropes of other films. Despite the dangers they encounter while navigating a course to Earth (that inevitably takes them through uncharted meteor storms), we are never really given a reason to really care about these characters (all the sad mooning over holograms of the families they left behind doesn’t actually make us feel like we know them).

The sense of nothing we are seeing here actually feeling new is key, and the main problem with the whole film. Countless other films have covered world-ending events. Clooney’s battle to cross the arctic and survive carries more than an echo of The Revenant by way of The Road. The struggles in space have lashings of Gravity with an Interstellar vibe. And those are just for starters. Even the final narrative twist (which you can probably see coming) echoes other film twists. For all the handsomeness of the film, it never feels fresh, always more of a tribute remix of other superior films that you should probably just consider rewatching instead.

That’s Clooney’s main failing here. As if he was so focused on getting the technical elements spot on, he never checked if the patient had a pulse. The Midnight Sky, knitted together from the offcuts of other films, has only the vaguest of heartbeats. Nothing is original and virtually no character in it ever feels either fully-formed or someone we care about. Others, all too obviously, serve as nothing but narrative devices. There are some wonderful shots and a lovely score from Alexandre Desplat. But narratively, the film often feels too cold, distant and emotionally dead. It ends up feeling far, far longer than its two-hour run time.