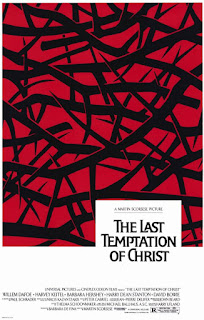 There are few films as controversial as this. Scorsese’s earthy adaptation of Nikos Kazantzakis’ The Last Temptation of Christ has lived its whole life under the shadow of the parade of traditionalists, conservatives and evangelists who have called for everything from the negative being destroyed to the death of its director. All this is rooted in the film’s quest – as in the book – for the human in Jesus, the saviour who was both mortal and divine. As part of this, it showed him expressing anger, doubt and of course, presented him with temptation and threw him into the dirty, working-class world where he made his ministry.

The film follows the life of Jesus (Willem Dafoe) pretty much as per the Gospels, with several interjections and reinterpretations (some of which seem designed to piss off the faithful). We meet Jesus as a carpenter who crafts crosses for Roman crucifixions by day, plagued by voices and fits at night. He knows he has a purpose but is scared of what it might be. Eventually he finds it, encouraged by Judas (Harvey Keitel) his most faithful disciple and a passionate campaigner against the Romans. The last temptation itself fills the final act of the film. On the cross, a disguised Satan comes to Jesus and offers him the chance to leave behind being the messiah and live a normal life: marriage, children and content old age surrounded by family.

The Last Temptation of Christ is Scorsese’s wrestling with his faith. It’s a highly personal, defiantly modern and daring version of the gospels that strongly invests in the notion that true faith is only possible if we also have doubt to overcome. And it applies this logic to Jesus, who is shown here as far more grounded, human and flawed than He has ever been in the movies (or anywhere else). Voiceovers communicate His constant doubts and insecurities – and even His resentments about not understanding what God intends for him.

Where other Biblical epics are old, stodgy and stiff, The Last Temptation profoundly challenges its viewers. This is not a picture postcard world. Jesus’ surroundings are humble and dirty. His disciples are simple men – Judas, the only one with any form of intellect, attacks them as clueless yes-men. But it’s a film that stresses the humanity of Jesus. It wants us to admire him even more, because He needed to overcome the same internal demons we all confront. This is not a saviour unbent in purpose, but battling always. It asks us to try and relate ourself to Jesus in a new way, to ask how we might have felt and whether we would have been strong enough to take on that mantle.

Played with extraordinary passion and fire by Willem Dafoe, this is a Jesus who is scared, reluctant, shows flashes of bitterness and anger but struggles to put all this aside to embrace His destiny and purpose as the Messiah. On other words, He’s far more human than we’ve seen before. He’s also rough and unprepared, in many ways, for His ministry. We see His first attempt at preaching – having, with half-confidence, half-apprehension told Judas He’s sure God will give Him the words – which is carefree, impassioned and amateurish but full of inspirational fire. He doesn’t quite convey the message He’s aiming for, but it is enough to win the devotion of several of the men who will become his disciples.

Scorsese shoots this, as he shoots many of the scenes among the crowds, with an immediacy and urgency, using a mobile camera and throwing us in among those listening to Jesus’ words. John the Baptist’s ministry by the lake is a near-orgy of religious ecstasy (with added nudity), full of wild emotion and jubilant singing – all of which drops out on the soundtrack to just the lapping of the river, as Judas and John meet. (It’s a brilliant moment that shows the world-stopping impact of revelation). Scorsese mixes this with scenes of a spiritual stillness and gentle mysticism. During his time in the desert – during which Jesus sits inside a perfect circle, which He draws free hand in the dirt – He encounters, in scenes of haunting unknowability, temptation from Satan in the form of a snake, a lion and a jet of fire.

It’s a starting point for Jesus’ embarking on a series of miracles and world-changing preaching. Controversially, even now, He is still uncertain of what He is meant to – he tells Judas (who remains a constant confidante) that God only gives Him small parts of the total picture as He needs them. He comes from the desert inviting his disciples to war – against Satan, and to bring God’s word to the world. It seems another provocative image – Jesus brandishing an axe in one hand, His own heart (plucked from His chest before the disciples) in the other – and it’s one of the points in the film where I feel Scorsese overplays his hand. I’m not quite sure what he is suggesting here, as Jesus calls his disciples to war, unless it’s a campaign of muscular Christianity. 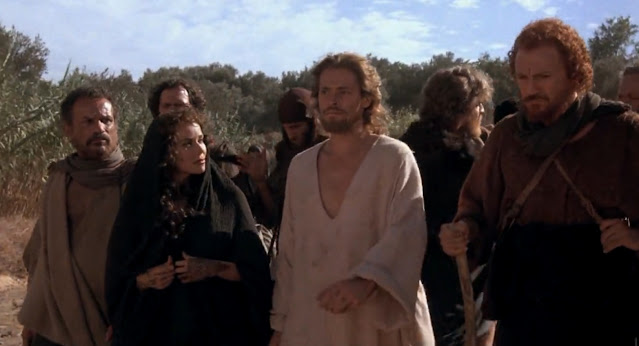 It competes with several other images and sequences that infuriated many. Some of these are too much: Jesus crafting crosses and even helping the Romans (in the film’s opening) nail a victim too one is far too much, a tasteless attempt to show a flawed man. Waiting to apologise to Mary Magdalene (a delicate Barbara Hershey) for his part in this, He sits while she services a roomful of men one after another. Moments like this always feel a little too much, even if it’s a more genuine insight into what Mary Magdelene’s life was actually like than we normally get.

But the Temptation itself is fascinating and moving – if a little too long. There was of course outrage at seeing Jesus marry and make love to Mary Magdelene, rejecting his purpose for a life of normality. Surely, if Jesus could be tempted by anything it might have been this: the man who never knew a moment of the life you and I lead, given a chance to experience it. With Satan – passing himself off as a young female guardian angel – guiding him, the vision sees Jesus age into an old man. Satan presents a plausible argument: man and Earth can live in a simple happiness, if they forget the demands of God in heaven.

The very idea of Jesus either deceived by Satan for a time – or seriously considering abandoning His divine purpose – is anathema to many, but again it re-enforces Scorsese’s view that doubt is essential for faith. That we can only commit the supreme act of commitment to God, if we are uncertain about doing it in the first place. And Jesus’ re-devotion at the end to his mission truly gives a sense of “It is being accomplished” in a way few other films have managed.

Ideas like this – and the earthy, vigorous nature of Jesus’ world – dominate the film and dare and push the viewer. Dafoe is superb – and Harvey Keitel excellent as a politically committed Judas, here not betraying Jesus, but taking on the harder role (that of betrayer – Jesus even tells him he is not strong enough for such a role, so has the easier part in dying). It’s shot with a brilliant modernism and has a superb score from Peter Gabriel, stuffed with lyrical etherealism and making use of several contemporary instruments. It sometimes overplays its hand, but as a personal work of a director juggling his own doubts, fears and faith on screen, it’s perhaps one of the most extraordinary religious films ever made.