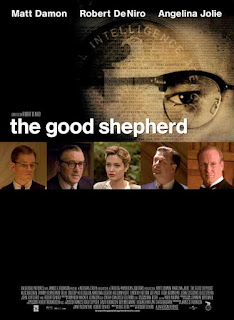 There is a fascinating story to be told about how the fledgling CIA first dipped its toes into professional espionage. Despite its best efforts, The Good Shepherd stubbornly refuses to find it. Covering a highly fictionalised history of the CIA from the 1930s to the 1960s – cutting back and forth between its history and the disastrous fall-out from the failed Bay of Pigs invasion – we follow Edward Wilson (Matt Damon) an inscrutable spy master and his duels with defectors, opponents within his own organisation, troubles in his marriage and his Soviet opposite number, the mysterious ‘Ulysses’ (Oleg Stefan).

The Good Shepherd is very, very, very roughly based on history. Wilson is a clear substitute for the CIA’s first head of counter-intelligence James Jesus Angleton. Hurt and Pace play versions of the first two directors, Allen Dulles and Richard Helms (as you can tell from their barely disguised character names). Billy Crudup’s suave Archie is a clear Kim Philby substitute. All these characters are thrown into a long, ramshackle plot with little drive or energy that can’t decide if it wants to be a spy thriller or a genuine history of the CIA.

In the end it settles for being something in the middle, which is a way of saying neither of them. The central mystery is “who betrayed the CIA operation at the Bay of Pigs”. Well for starters, the failure of the Bay of Pigs needed no shady leaker to fall apart, since it was a terrible idea, disastrously executed. The film spends a great deal of time filling in a back story to illuminate this mystery, but fails so completely to communicate the stakes (other than whether Wilson will survive some internal office politics) that it could (and perhaps should) have been dropped from the film.

The main problem is the complete lack of thrust, pace or truly relatable characters. It’s clearly been put together by fans of the works of Le Carré who think just saying words like “tradecraft”, “mole” and “scalphunters” will make it indistinguishable from the master. What it doesn’t carry across is any of Le Carré’s politics, humanity or fire. For instance, Le Carré would have ripped through the posturing amateurishness of the nascent CIA – which recruits almost exclusively over-grown school-boys from secret Ivy League societies – and the arrogant incompetence of many of its early agents.

The Good Shepherd avoids this entirely, instead seeing these secret societies as training grounds for covert thinking rather than ludicrous elite clubs that restrict the talent pool to a small elite with little world experience outside of their country clubs and bizarre clubbish rules. The CIA is generally not criticised at all – either for incompetence or imperial over-reach – and its failures have to be chalked up to spies and traitors rather than mistakes or poor calls (of which it made many). Swallowing everything whole, it renders the film toothless and eventually uninteresting.

The Good Shepherd bites off an absurd amount of ‘a few degrees left of history’ events. What this generally means, is events race by with an astonishing speed without really making any connection with the viewer. Characters are defined more by who plays them rather than who they are. Some colourful actors in sprightly cameos like Baldwin, Gambon and Pesci just about give their roles depth and interest in scenes where they are co-leads. But others who have vague, limited characters arcs across the film – such as William Hurt, left with nothing to play with at all, or John Turturro wasted as a bruiser number two for Wilson – fail to make any impression. Although you can forgive it a lot for giving John Sessions of all people the best role he perhaps ever had as a violin-playing defector.

At its heart is Matt Damon who gives a performance of unknowability and cold, ruthless dedication to the agency with such perfectly judged distance and blankness that you never once really give a damn about him. His marriage is of course a disaster – the only real big deviation from Angleton’s own personal history – with Angelina Jolie struggling with a nonsensical role that switches from ambitious sex-pot to mousy, frustrated housewife with barely a second to explain why.

De Niro’s direction is assured, professional and precise but fails to ever bring this story to life or really communicate any reason for telling it, other than an armchair enthusiasm for espionage stories. Because it’s never about anything – neither the morals of spying, the cost of cold wars, the glory of serving your country or a fascinating duel between two master-spies (there are elements of all of these to be fair, but all just thrown in there rather than explored in any depth) – we are never given a reason to really be interested. So much of its history is total bunk (almost nothing happens the way it actually happened and virtually every character is an invented amalgam) you don’t even come away having learned anything.

The film eventually focuses in on resolving its central non-too-engaging central mystery, with a series of reveal that can probably guessed a fair way off (even if one of the characters wasn’t an obvious Philby substitute). It does boast a surprisingly brutal plane flight, but otherwise ends with the same puff of nothingness that most of the film amounts to. There are secrets and mysteries here – but no depth, wisdom or interest to give them weight.