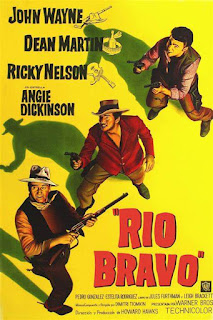 When they saw High Noon Hawks and Wayne were unimpressed. Who was this sissy cry-baby, blubbing in his office, begging all and sundry to join him in an impending gunfight with an outraged gang? This wasn’t the West they knew. How un-American was that? So, heads went together and they came up with their counterpoint: Rio Bravo, where the Duke does the right thing, locks up the bad man, is supremely unruffled by threats of violence from his gang, turns down offers of help from across the town (he doesn’t need to worry, they all help anyway) and even finds time for an unfazed, late-night jail-room sing-along with his deputies. Take that Fred Zinnemann and Carl Foreman!

The Duke is John T Chance, a grizzled, experienced sheriff, still in-his-prime, who arrests the brother of Nathan Burdette (John Russell) after he shoots an unarmed man in a bar brawl. When Nathan demands his release – or there will be hell to pay – Chance relies on the men he can trust: old-timer Stumpy (Walter Brennan), recovering alcoholic former-deputy Dude (Dean Martin) and (eventually) plucky young gunslinger Colorado (Ricky Nelson). The three simply have to wait for the Marshalls to arrive and take Burdette away – but will the Burdette’s strike first? On top of which, Chance’s eye is caught by the widow of a cheating gambler, Feathers (Angie Dickinson) – does he also have time for a bit of love?

Rio Bravo is possibly one of the most “shooting-the-breeze” films ever made – even though the general air of manly cool is punctuated by the odd gun-fight. Wayne and his gang are far too cool, confident and quick on the draw to ever be that worried about the approaching threat of the Burdette family – not that you can blame them, since Hawks spends only the minimum amount of time fleshing them out. Instead, the film is a chronicle of a few days where they hole-up and basically shoot-the-breeze – their banter carrying over to exchanging bon-mots during the final gunfight (“You took two shots!” “I didn’t take the wind into account”). It’s the sort of unfazed cool against the odds that you can see has carried across to a whole host of modern action and superhero films, heroes who are so confident in their skills they crack wise even under fire.

Rio Bravo is directed at a gentle pace but complete assurance by Hawks. It occasionally has a feel of settling down and watching a relaxed after-show party, with a group of actors so comfortable in each other’s company, that they simply filmed themselves having a whale of a time. Wayne marshals the whole thing on screen with authority and confident precision: the part is far from a stretch, but he hits the beats with a naturalness that really works, from a fatherly mix of encouragement and disappointment in Dude’s slow turnaround from his drunken collapse, to a crusty flirtatiousness with Feathers (Angie Dickinson at her most radiant here).

The film is full of delightful little moments that pop-up with a perfectly judged regularity. Colorado and Feathers save Chance’s bacon with a perfectly timed flower-pot through the window, matched with Colorado’s pitch-perfect shooting skills. Dude judges exactly the location of sharp-shooter through the drops of blood on a full beer-glass (a lovely image from Hawks). Chance and Colorado confront a card cheat. Chance is so cool under fire, that pinned with two guns on his back in a small room, he never once feels like he thinks there is any real danger.

Either side of these events, the film is full of a sublime lackadaisical charm, as our heroes riff off each other, never once letting events get too heavy. You couldn’t cast Dean Martin and Ricky Nelson without having them break into song – so of course, they do just that in a late-night sing-along. It seems to be about blocking out the sound of Degüello, the cut-throat Mexican song that plays non-stop outside the town overnight, warning them of the perils to come. But really it’s just because we are watching three blokes chilling and simply too cool to be that flustered by scare-tactics. (The Degüello here, by-the-way, was composed by High Noon’s composer Dimitri Tiomkin – another one in the eye for that film).

Wayne’s charges all do a fine job on screen, with Dean Martin in particular fitting the role like a glove and bringing a wonderful sense of sixties brashness as well as a surprisingly affecting struggle with alcohol. Ricky Nelson does his duty when pushed. Walter Brennan wheezes and cackles as only he can. Angie Dickinson is wonderfully vibrant and sexy – surely, with those tights, she’s too much for even the Duke to handle?

Duty is what it is all about, and these are men’s-men who knuckle down and get on with it rather than complain. People may offer to help, but only those qualified will do so (two of them rock-up to help at the final gunfight anyway). That film’s concluding shoot-out is rousing, dramatic and literally explosive. Hawks shoots it all with assured skill – the film’s long silent opening, is a wordless delight of reaction, implication and careful character development (Chance and Dude are wordlessly, but perfectly, established).

Rio Bravo is one of those films people has have their “favourite” – and that might be because it’s laid-back, fun and invites you to join on it. It’s free of pretension and shows you the sort of men you’d like to be, going about effortlessly the sort of things you’d like to do. No wonder people love it so much.