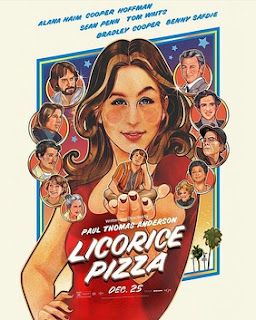 Is there a force harder to understand than love? That’s basically the theme of Paul Thomas Anderson’s delightfully whimsical film, which explores an unlikely relationship in Los Angeles in 1973, played out to a backdrop of the OPEC gas crisis. Told with a dreamlike grace and overflowing with affection and warmth for its characters, it’s a deceptively simple film that is a masterpiece of heartfelt craft.

Standing in line to have his photo taken for his High School picture, 15-year-old Gary Valentine (Cooper Hoffman) is instantly smitten with cynical photography assistant, 25-year-old Alana Kane (Alana Haim). Much to her surprise, his claim to be a child actor in the movies is actually true – he’s co-starring with Lucille Doolittle (Christine Ebersole, in a thinly veiled spoof of Lucille Ball) in a movie. He’s also a budding entrepreneur, setting up a business selling water beds in LA. Alana still doesn’t know what she wants to do with her life, but finds herself drawn to Gary, despite her acute awareness of their age difference. The two of them become business partners and drift in and out of friendship, never quite sure exactly how they feel about each other.

Now I guess you might well have checked yourself there at the thought of a romance between a teenager and a 25-year-old. But there is no prurience here, no masturbatory coming-of-age fantasy with an older woman or sleazy grooming. This is instead a very genuine, sweet and moving romance between two people who only really have numbers keeping them apart. It particularly works because Gary in many ways feels about 5 years older than he actually is and Alana often feels about 5 years younger than she is. In many ways they are both twenty-year-olds – and it’s only the fact that they are not which puts a barrier between them being together. As such it becomes very easy to accept their potential relationship, and even root for it.

That’s massively helped by the fact that these two characters are marvellously embodied by two first-time actors. Anderson specifically wrote the role for Alana Haim, member of family rock group Haim (Anderson has directed several of their music videos, and was taught by Haim’s mother). She’s stunning: prickly, quick-witted, cynical but also vulnerable and sensitive. She’s desperate to find some sort of purpose in her life: exploring the role of trophy girlfriend, businesswoman and political campaigner, but always seems like she’s slightly lost, for all her defiance. Haim is also wonderfully exasperated and befuddled by the interest she feels for this younger guy, barely able to acknowledge she might have feelings for him. Haim is superb.

Gary, played by the son of regular Anderson collaborator the late Philip Seymour Hoffman, is equally well bought to life by Cooper Hoffman. Gary’s career as a child actor is coming to an end: as we see through a disastrously over enthusiastic audition, which the casting directors watch out of a polite respect. But Gary has the go-getting hustling skills of someone much older. He’s got an eye for business opportunities – water beds, film productions, pinball machines – that would be the envy of others. He’s smart, confident, frequently cocky, assured – but at times also staggeringly immature (like a teenage boy he’s obsessed with boobs and Alana watches with frustrated despair as he and some friends drag out miming a wanking gag for what seems forever). He’s also still sometimes just a kid: mistakenly arrested at one point, he sits in terror in a police station and, even when uncuffed and released, is too scared to leave the station without Alana’s encouragement.

That arrest scene is yet another moment that reaffirms the deep bond and love between these two people. Wrongly arrested for nominally fitting the description of a suspected killer – “Look forward to Attica!” the police taunt him – he’s hauled from an Expo. Alana follows, running full pelt after the squad car – even though at this point they’ve not spoken for weeks – and then holds him for what feels like forever when he is released (before, of course, slapping him and saying “What did you do?”). Later, when Alana falls while taking part in an ill-advised late-night motorbike stunt, Gary will run the length of a golf course to make sure she is alright (despite, again, the two of them having cut ties before this). Moments like this sing with a real romantic force.

Particularly as this is such a love-hate film. Alana and Gary constantly hurt each other, finding ways to get into perfect sync only to screw it up. Gary is heartbroken when Alana starts to date his older co-star (a smug atheist, played wonderfully by Skyler Gisondo). Alana is overcome with jealousy and pain when Gary flirts and kisses a school crush his own age at the launch of their water-bed business. After auditioning for a movie role, Alana delights in making Gary uncomfortable when he walks into the bar where she is enjoying a drink with the movie’s male star. Through it all, these two are drawn back to each other time and again – and when the chips are down their loyalty and love to each other is absolute, even if they can’t always admit it to either themselves or each other.

Around the two outstanding central performances, Anderson constructs a series of scenes and skits that drift from one to the other. The whole film has a curiously dreamlike transition structure: it’s frequently hard to tell how much time has passed and the narrative omits overly functional scenes, so we frequently see a situation has changed but only an implication of why (example: Gary’s mother tells him she can’t chaperone him to New York for a TV appearance – next shot Alana and Gary are on a plane. How was this agreed? Who cares!). Each of the sequences plays out with a shaggy-dog story charm, directed with the confidence and brilliance of a director who is happy to make it look easy. And let me tell you, very few could pull off something as light and charming. 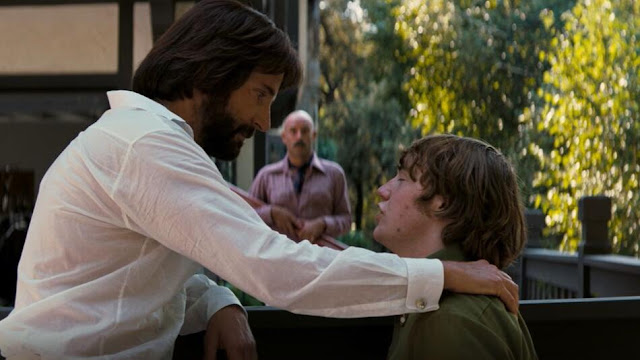 The film is stocked with delightful cameos. John Michael Higgins is very funny as the owner of a Japanese restaurant, with two successive Japanese wives who he “translates” for by repeating in ludicrously Japanese accented loud English whatever has just been said. Harriet Sansom Harris is very funny as a plugged-in agent. Ebersole is a monstrous attention-hungry star. Sean Penn is funnier than he’s ever been playing a version of William Holden, pissed and barely able to distinguish between his film roles and real life, cajoled by an equally pissed director (Tom Waits on top form as a sort of Peckinpah-Huston combo) to perform a motorbike stunt late at night. Best of all is Bradley Cooper, who burns through his brief scenes as an unhinged Jon Peters, a whipper-cracker of unpredictability and insatiable horn.

But it’s the two leads that give this heart, and Licorice Pizza is an amazingly sweet, tender, endearing and deeply charming love story about a couple who can’t quite understand why they want to be together and spend most of the movie making sure they’re not. Anderson brings it altogether with immense homespun charm – this is almost a home movie, Haim’s family play he character’s family, the cast is stuffed with Anderson’ family and friends – and Licorice Pizza is the sort of delight that shouldn’t work, but very triumphantly does.