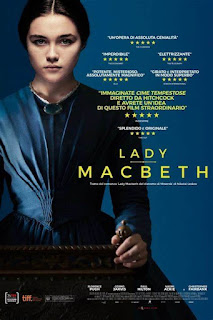 On a rural estate in Northumberland in 1865, Katherine (Florence Pugh) enters a loveless marriage with Alexander (Paul Hilton), son of landowner Boris (Christopher Fairbank). The marriage is a disaster, with the couple incompatible and Katherine bored and trapped with no friends or allies. When Alexander and Boris travel for business, she finally gets the chance to explore her surroundings and enters into a passionate sexual relationship with estate worker Sebastian (Cosmo Jarvis). When Boris – but not Alexander – returns, Katherine begins a chain of events that will see her commit a series of increasingly shocking crimes to hold onto the things she wants.

Oldroyd’s film is adapted by Alice Birch from a Russian short story, and is told with an icy, observatory coldness that doesn’t flinch from the increasingly sociopathic ruthlessness of its lead character. The film at first seems like it will set out a feminist fable, of a trophy wife struggling against the neglect and imprisonment of forced marriage. But, as it progresses, any pretence that Katherine is a feminist hero is stripped away: she is modern only in the most dreadful sense – a woman who will willingly commit almost any act of ruthlessness to safeguard her interests.

Playing Katherine, the film is blessed with a star-making turn from Florence Pugh. Only 19, Pugh gives a performance of such stunning depth and intelligence that possibly hasn’t been matched since Kate Winslet in Heavenly Creatures. She’s a master of outward stillness and inscrutability, while always communicating the raging whirlpool of emotions underneath the surface. She’s fiercely intelligent, viciously ruthless, frequently observes other characters silently and can twist her face into a mocking defiance. Pugh also communicates the desperate emotional need for connection that motivates this woman, her willingness to go to such shocking lengths motivated by that yearning for a love that she has never known.

Oldroyd is careful not to present her a Gothic monster (would certainly be easy to do so!). The film is careful to outline how unwanted and ill-treated she is by Alexander and his father. Boris (a bullying Christopher Fairbank) ignores and talks down to this person-as-a-piece-of-property, basically just an unlooked-for freebie with some land, who is failing to get on with the production of an heir. Alexander (Paul Hilton, superbly weak and dripping with contemptuous bitterness) has no interest in his wife, his sexual interest restricted to ordering her to strip and face the wall while he pleasures himself. Neither of these characters ever have anything like a conversation with her, instead speaking to her like a dog or malfunctioning appliance.

So, you can see why she is so drawn to the passion of Sebastian – and also, perhaps, why she might find this cocky but not-exactly-sharpest-tool man an attractive chance for her to wear the trousers for once. Their couplings have a sexual urgency and passion to them that is lacking for anything else in the film. But we never see them as emotional or intellectual equals. There is no scene of romance, bonding or conversational or unsexual emotional connection with them. Katherine becomes obsessed with Sebastian – but it seems to be at least as much an obsession with the sex and the sense of control he brings her, as much as it is Sebastian himself.

As Sebastian, Cosmo Jarvis is initial bluster and wide-boy charm that strips away to reveal a man far more timid, scared and increasingly out-of-his-depth with what he’s got caught up in. For all his Lady Chatterley’s Lover physicality, Jarvis has a real vulnerability in his eyes and a certain little-boy lost quality. His panic and shock as event balloon become increasingly tragic.

Equally affecting is the terror of Naomi Ackie’s maid, torn between different sides. Like Pugh, Ackie is superb at suggesting emotional torment under a still surface and her character Anna frequently finds herself the mute observer of increasingly dangerous events, unable to influence them.

The film is shot with a coolness that at times makes it hard to connect with emotionally. In many ways this is a horror film, with a creeping intimidation, scoreless backdrop and a chilly aesthetic of empty rooms and muted colours. There are some bravura scenes: a life-changing breakfast scene is shot with a terrifying but suggestive stillness, just as it is played by Pugh with a chilling unreadability. Oldroyd’s film masterfully uses a number of simple and unflashy camera set-ups that build up to an overwhelming feeling of dread.

And some of this stuff is hard to watch. Two killings are shown in disturbing detail, enough to haunt your dreams. But the film wisely just presents the facts and avoids judgement – however implied that might be. It also makes for an intriguing condemnation of avarice – everyone in the film seems to be longing for something, but none of them find that struggle was worth it. And at its centre is a intriguingly unknowable and unreadable woman, who only becomes more alarming the more we find out about her.

Lady Macbeth is sometimes a little cold and distant for its own good. But its hauntingly grim and has a stunning, career-making performance from Florence Pugh. Filmed with creeping dread, it’s a cold, disturbing film that will linger with you.