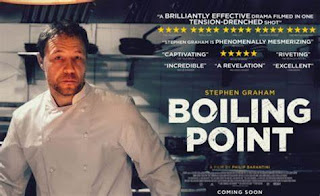 Who would want to run a restaurant? Blimey it can be stressful enough to cook for family and friends. Imagine having to prepare meals for hundreds of paying customers. Boiling Point follows – in real time – one single night of service in an over-booked restaurant a few days before Christmas. Chef Andy Jones (Stephen Graham) is feeling the pressure: his wife has left him, he’s let the paperwork slip so much over the past few months that the restaurant’s Food Hygiene Rating has slipped from five stars to three, little mistakes are slipping in and his former partner (and now celebrity chef) Alastair (Jason Flemyng) is sitting out front. It won’t be long before things hit the eponymous Boiling Point.

Expanded from a 22-minute short film made a few years previously, Philip Barantini’s film is shot in one 93-minute continuous take that starts with Andy’s (late) arrival at the restaurant and takes us through a night’s service. There are some films where this one-take device seems like a gimmick – but here it’s an essential part of the success of the film. Following all this in real time, with no single break or cut away, is like taking part in a giant panic attack. I can genuinely think of few films that were as tense as this one. There is a sweaty, edge-of-the-seat panic about the entire film that means you spend its entire runtime biting your fingernails, waiting for something to go wrong.

And there are so many potential disasters teed up. It’s a sign of the film’s intelligent, skilfully swift construction that all of these are established with minimum dialogue – and not all of them lead to disaster – but in short order we see not only the tensions among the staff (the disaffected junior chefs, the under-pressure waiting staff), but also a bullying Dad intent on making trouble on table 7, a drunken gaggle of ladies on a night out, a group of self-proclaimed social media influencers demanding off-the-menu treatment, a woman with a nut allergy that’s not correctly recorded on the ordering system, and that celebrity chef and the food critic he’s bought with him for dinner.

All this is of course bubbling up and hammering into an already deeply-under-pressure Andy, played with great skill by Stephen Graham, who has mastered these terminally weak alpha-males. Andy is the unknowing root cause of many of the problems. The restaurant’s health rating has dropped solely (as explained by a patronising but well-meaning health inspector, while Andy sits through the conversation like a sullen child who’s been caught cheating on his homework) because his lack of essential record keeping has made it impossible for it to be scored higher. Nevertheless, Andy lashes out at his junior chefs for the minor infractions also recorded, as if they were to blame. 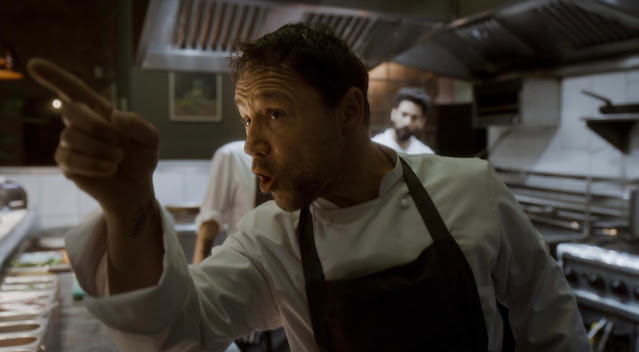 Grasping a water bottle that he suspiciously swigs from almost non-stop, Andy has ceased leading in the kitchen: stock orders are not made, junior staff are either unsupported or allowed to shirk their duties (a kitchen hand is delivering the bare minimum, spending most of the shift on the phone or scoring drugs in the car park). Andy barely prepares any food and largely avoids any communication with his game-faced-but-deeply-out-of-her-depth restaurant manager Beth (an all-business Alice Feetham, trying to cover a rising sense of panic and a desperate need to be liked).

Kitchen command has effectively shifted to his deputy chef Carly, superbly played by Vinette Robinson. Calm, authoritative and supportive of the junior staff, Carly is just about holding the operation together by her fingertips, but even she has clearly had enough. There is a scintillating, hands-over-the-mouth dressing down she hands out to Beth – who she furiously points out doesn’t even realise all the things she doesn’t know – which feels like months of stress and frustration bursting out with carefully thought-out, inexorable, calm fury.

Just as pissed off is meat specialist Freeman (a brilliantly surly and resentful Ray Panthaki) who has had enough of cleaning up after Andy’s poor preparation and Beth’s greater interest in social media promotion rather than running a restaurant. The kitchen is full of careful character stories that swirl around the edges of the story, as the camera moves seamlessly from location to location. There is a beautifully done early scene between Hannah Walter’s motherly dessert chef and her young apprentice that literally brought tears to my eyes for its warmth and humanity.

Out front we wait for the inevitable cataclysm to take place. There to see it is Jason Flemyng’s smugly passive aggressive Alastair, mouthing platitudes about how he’s there to support Andy, while taking credit for his menu, mocking the set-up and pontificating about how he would improve every single dish. But even he is at breaking point, as later developments show.

All of this is built up by the single-take effect. Whenever the camera goes somewhere, we know that no second will be wasted and we are set to see something potentially dramatic. We begin to dread every time a young black teenage waitress heads back to table 7, where the customer doesn’t want her touching his glass and plates. Every return to the kitchen brings the sweat of wondering if a fatal mistake will take place. With the camera weaving around, following the action and moving seamlessly (but with obviously a huge amount of forethought) from place to place, this is brilliantly shot film where the one-take effect adds immeasurably to the pressure cooker effect.

Despite this, the final ending doesn’t quite land with the impact it should. But you can forgive it a great deal for the tense, gripping ride you follow to get there. The cast are all faultless – and often even more than that – and the direction is spot-on. This film is an unsung triumph – it should get a lot more recognition.