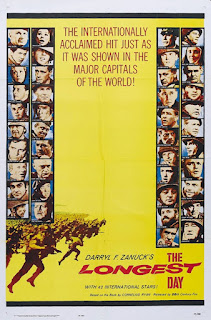 Darryl F Zanuck wanted to make the War Film to end all War Films. So, what better way than to restage D-Day itself, with a cast (as the poster brags) of 42 International Stars, playing out almost in real-time. It’s a grand ‘mock-documentary’ shot in black-and-white (so that actual war footage can be integrated into the film) and aims to show the perspectives of the four main combatants (the Americans, the British, the French and the Germans – with all their scenes played in their respective languages). Adapted from a definitive D-Day book by Cornelius Ryan, it makes for huge, now slightly old-fashioned, Sunday afternoon fun and one of the most iconic second world war films.

To make his dream come true, Zanuck left no stone unturned. Pretty much every single part is played by a ‘name’ actor (although, rather like Around the World in 80 Days, time has left some of them less recognisable than others) no matter how small the role. And I mean no matter how small. Many of the actors appear in no more than one or two scenes. Steiger chips in a brief speech as a Naval officer. Burton has two scenes as an RAF officer, one of the last of the "Few". Fonda contributes a few minutes of heroism as Theodore Roosevelt Jnr. Robert Ryan briefs The Duke as General Gavin. Jean Servais makes a grand speech as a French Admiral. Gert Frobe doesn’t even speak as a (what else?) bullying German soldier. This parade of stars does though does mean you pay a lot more attention to every single part and it makes it a lot easier to keep track of who’s who.

It’s certainly a ‘producer’s’ film. Zanuck held complete creative control, splitting the directorial duties between three hired hands. Annakin directed all the British and French scenes (and most of the American ‘briefing room’ scenes). Martan, an experienced second unit director, was hired to shoot most of the battle sequences. Wicki looked after the German sequences. With the brief being to replicate the documentary style of actual footage, naturally this basically led to a film that doesn’t have the feel of being ‘authored’ (in the way, say, Saving Private Ryan does), but it’s functional shooting style and design does make it fairly easy to follow.

And it needs to be easy to follow, as this is a very long film indeed – and with the cast frequently changing from scene to scene, can become overwhelming. The quick changes of location – and the lack of time spent with any single character – often means it’s hard to connect to strongly to any of the individual characters. Most of the more prominent characters gain their personality solely from the actors playing them: so I don’t really know what the real Colonel Vandervoot is like, but I know his character here is basically ‘John Wayne’.

The more prominent roles in the script rely on these personality parts. Wayne probably has the largest individual role as the Paratrooper commander who breaks his ankle on landing, but doesn’t let that slow him down from hitting his objective. (Wayne also gets a great little speech, the sort of thing much missed in Ryan, where he praises Brit fortitude under the Blitz, which is a lovely moment of Allied brotherhood). Mitchum gets the juiciest action as General Cota, the highest-ranking soldier on Omaha Beach, who leads the first break out. At the other end of the ranking, Red Buttons brings charm and heartfelt emotion to the most memorable sequence as Pvt John Steele, the paratrooper who landed on top of the church spire at Sainte-Mère-Église, deafened by bells and forced to watch the rest of his platoon slaughtered on landing.

The scale is really what it’s all about. The recreation of the D-Day landings is stunning (the first boats, though, don’t hit the beaches until well over two hours into the film), and its genuinely hard to tell the difference between what is recreated and what is actual war footage. The film doesn’t shirk from showing the cost of war, or the slaughter on that beach (although of course, it looks reserved compared to Ryan). But the combat and operations elsewhere are also perfectly recreated. Richard Todd is very good as Major John Howard, in an expert reconstruction of the seizing of the Orne Bridges near Caen (in real life, Todd himself was one of the commandos serving under Howard and even has a scene where Todd as Howard talks to another actor as Todd).

These battle sequences make for compelling viewing. Slightly less so is the long build-up of the Allies to the attack. There are many, many scenes in various briefing rooms and for every delight (such as Jack Hedley’s briefing around “Rupert” a model paratrooper, dropped as a distraction) there are po-faced actors staring into the middle distance and discussing how important everything is. By far and away the most interesting content in the first half is less the Allies (waiting to leave) than the Germans (trying to work out how and where the Allies will arrive). These scenes feature a range of German officers, from the quietly resigned to die-hard, head-in-the-sand Fascists, and revolve around a series of fascinating debates on where, when or even if at all the Allied attack will come. With a cast of excellent German actors – Jurgens, Preiss, Hartmann, Hinz and Wolfgang Buttner are particularly fine – these scenes stand out as they present a perspective we don’t often get to explore. (Even though the film squarely accepts the German military view that the defeat was all Hitler's fault and the army was completely blameless of any of the crimes of Nazism.)

After the slow-build, the explosion of tension and action is done really effectively. Sure, the film is long and episodic, but the ever-changing locations do frequently help with the pace. The film’s documentary style also lends it a great deal of authority that a more ‘fictional’ film would not have. After all, pretty much everyone in the film is ‘real’ and while the film could be seen as a collection of D-Day anecdotes, strange moments – such as a platoon of Germans and Americans passing each other on opposite sides of a low wall without noticing each other – have the ring of truth. The script was doctored by a host of major novelists and playwright (including Noel Coward) to brush it up, but really this is a producer’s triumph.

And it is a triumph for Zanuck. Everything he sought to do, he accomplished here – and the doubts that he could pull it off were moved as wrong, as those who doubted whether the Allied plan to cross the Channel would work. Hugely impressive in its staging, detailed in its recreation and with a cast of stars and top actors giving every scene a fresh bit of life, this makes for one of the all-time classic war films.