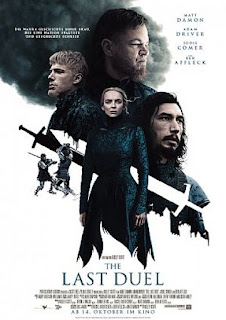 The medieval era had its own solution for “He said, She said”. Let God decide via a fight to the death. After all, He would never let the injured party lose, would he? Scott’s The Last Duel is a dramatisation of one of the last French judicial duels, in December 1386, between Sir Jean de Carrouges (Matt Damon) and his former friend Jacques le Gris (Adam Driver), after Le Gris is accused of raping Carrouge’s wife Marguerite (Jodie Comer). Scott’s Rashomon-inspired film shows the events leading up to the duel from all three characters’ perspectives.

The three different stories we see are not radically different. Unlike Rashomon – which presented totally different versions of the same events, according to the prejudices or agendas of the storytellers – The Last Duel’s versions stress subtly different reactions or presents different fragments of an overall story. So, for instance, Le Gris and Carrouges remember different elements of a battle. Carrouges recalls the noble charge to save the innocent, saving Le Gris’ life in the final stages of combat. To Le Gris it’s a suicidal charge, in which he saves an unhorsed Carrouge’s life. After the rape, Carrouge remembers offering his wife sympathy; she remembers his anger and demand they have sex at once to “cleanse her” of the stain.

These mixed recollections work best when we see each of them remember a fateful reconciliation meeting between Le Gris and Carrouges (where Le Gris and Marguerite first meet). A wedge has been driven between them ever since Carrouges believed Le Gris cheated him out of both land and his father’s former position. When the two agree to try and put the past behind them, Carrouge asks Marguerite to give Le Gris a kiss of peace. He remembers her surprise and timidity. Le Gris remembers her as being quietly excited with a kiss that lingers. Marguerite remembers a kiss from Le Gris that lingers too long. Small moments like this are where the film is at its strongest, making its concept feel very relevant today in our world of accusation and counter accusation.

But these moments are few and far between. Most of the time there isn’t this subtle variation. Where the film is weakest is when we (frequently) see the same events, presented the same way, three times. While our perception of Carrouges changes – from the ill-treated noble he sees himself to the sullen, self-entitled whiner everyone else sees – our idea of Le Gris is fundamentally the same (blissfully self-entitled). Fundamentally, when we see events the first time, later versions only really tweak our perception of them rather than challenge it.

You can see this in the rape itself, which we first see from Le Gris’ perspective. The film shows Le Gris’ understanding of consent has been twisted by most of his sexual experience being court orgies with playfully protesting prostitutes. His pursuit of a genuinely unwilling Margeurite around her room echoes exactly the pretend-chases and “chat up lines” he’s used in those earlier scenes, so we understand it’s possible he doesn’t actually understand he’s raped her. But no viewer can see Le Gris’ version as anything other than rape. In fact, the only tangible difference when we see the event from her perspective is that her screams of “No” and “Stop” are louder and the camera focuses more on her anguished face. If the film is presenting any tension about whether this is a consensual encounter or rape, it ends the second we see Le Gris’ story.

This negatively effects the drama – and actually makes Marguerite’s version seem strangely superfluous. You start to feel we might as well see all three perspectives at the same time, as the narrative trick ends up adding little to the film – especially since the film categorically states Marguerite’s version is the truth. Why not just tell the whole film from her perspective in that case? It also doesn’t help that Marguerite goes last – which means until an hour into the film, the character we should be most engaged with and sympathetic towards has stood on the side-lines.

This is particularly unfortunate as the film is striving for a feminist message. The men are callous and self-obsessed, treating women as sex toys or assets – and are praised for it. Marguerite though is intelligent and principled, marginalised by her husband and condemned as a whore when she protests her rape. She pushes her case with determination, despite discovering she will be condemned to burn if Carrouge loses (he of course is only in his own honour). Her word is only good if backed a man, and she is powerless to defend her innocence.

It’s the lot of medieval women. Harriet Walter (rocking a bizarre appearance, straight out of David Lynch’s Dune) as Carrouge’s mother tells Marguerite the same thing happened to her, but she considered it pointless (and dangerous) to press charges. What we see of the judicial system is ruthlessly unjust and misanthropic, with women harangued to confess their guild for tempting men.

But it doesn't quite click together. It’s a shame, as many scenes are highly effective. The rape – both times we see it – is alarming. The final duel is brilliantly shot and hugely tense, not least because Marguerite stands literally on the top of an unlit bonfire watching every blow. Scott’s shoots the film with the same blue-filtered beauty he gave to the early scenes of Kingdom of Heaven.

There is of course an oddness in seeing such American actors as Damon, Affleck and Driver in period setting. The accents are an odd mix: Comer basically uses her regular (non-Scouse) performance voice, Damon does a gravelly version of his own, Walter an American twang to match Damon, Affleck is halfway to plummy Brit, Driver flattens his Californian tones. Damon is pretty good as the sulky, surly Carrouge who gets less sympathetic the more we see him, Driver is suitably charming on the surface but selfish. Comer plays wounded injustice extremely well and brings a lot of emotion to a difficult role. Affleck has the most fun, flouncing around in a blonde wig as a lordly, hedonistic pervert who likes nothing more than belittling Carrouge.

The Last Duel is part way to a decent film, but it just lacks that little bit extra to make it really come to life. Its alternative versions of the truth don’t illuminate as much as they need to – even if they are at points pleasingly subtle in their differences. It has an admirable feminist message, but defers most of it to the second half of the film (were they worried about sidelining the famous male actors?) and it’s concern that we should not doubt Marguerite at any point does undermine its drama. Handsomely filmed, it doesn’t make the impact it should. Perhaps that’s why it was one of the leading box office disasters of the Covid Pandemic?