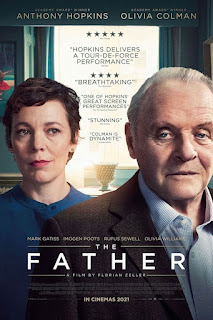 Is there any worse nightmare than the thought of losing your mind? Worse of all, to lose your mind in stages: to be aware, in every moment, that things are not as they should be, that people and places no longer seem to fit your memory of them. That you can walk into a room and completely forget why or meet someone close to you and have no a clue who they are. It’s an unimaginable condition to go through – and the subject of Florian Zeller’s exceptional adaptation of his award-winning play, The Father.

Anthony (Anthony Hopkins) is a retired engineer slowly succumbing to dementia. Events are increasingly confusing to him. Is he living in his own flat, or is he living with his daughter Anne (Olivia Colman)? Is Anne moving to France or not? Is she married to Paul (Rufus Sewell) or not? Where is his other daughter who looks so like a woman who may-or-may-not be his new carer, Laura (Imogen Poots)? From moment-to-moment Anthony struggles with confusion, rage and fear as the world constantly fails to coalesce into a meaningful picture, but instead remains a fragmented jumble.

That’s the brilliance behind Zeller’s adaptation of his own award-winning play. It captures the perspective of the world for those suffering from dementia in a way no film has done before. The play’s timeline is disjointed in an almost Nolan-esque way, and it’s not clear whether we are watching ‘real’ events’ or if all of these events are memories of Anthony’s which dementia has shuffled, reordered and recast. Either way, the film constantly refuses to allow you any grounding from scene-to-scene, and refuses to present clear answers (although you can infer much).

Even the sets betray us. From to scene to scene the apartment is redressed, sometimes in subtle ways, sometimes in jarringly different ways. The same fundamental layout sees every room constantly redesigned. Sometimes it could be Anthony’s apartment. Sometimes Anne’s apartment. Sometimes a mix of the two. Sometimes it’s a hospital, in others a retirement home. Often it might be a combination of one or more of these locations all at once. The style of decoration is inconsistent, the furniture changes, pictures move, even the colours of bedsheets change. Every single scene disorientates us: it’s only a movie for us, but for Anthony this is his life.

In fact, if The Father has a filmic influence, interestingly it’s a horror-film. Anthony is a man trapped in a situation where he knows everything is wrong, but can never fully understand why, or get people to listen to him. Often the camera catches discomfort and fear on Hopkins’ face, and it’s clear he neither knows where he is or, in many cases, who the people with him are. But for fear of not being believed or a sense of powerlessness, he’s too proud and scared to ask. It taps into the powerlessness of horror films, where you are relentlessly chased by a force outside your control: in The Father that force is life, which has become for Anthony a disturbing kaleidoscope where everything makes sense to everyone except him.

Of course, a large part of this is sold by Anthony Hopkins Oscar-winning lead performance. Hopkins delivers to an astonishing degree: this might just be the greatest performance of his career. Although we see flashes of ‘the true Anthony’ – his wit, playfulness and intelligence – Hopkins deftly and subtly demonstrates the wildly varying mood swings dementia brings. At times he’s paranoid, defensive and even aggressive. At others he’s stunningly vulnerable and scared – he has two breakdown scenes of such heart-breaking vulnerability and boyish fear, they are tough to watch.

The film opens with Anne telling Anthony she’ll be leaving for Paris, and Hopkins’ face collapses into a crumpled, puffy, scared-little-boy face while he plaintively asks what will happen to him. Anthony fixates on things that give him any sense of control: he is obsessed with his watch, hiding it and continuously searching for it. He will dredge up a fact from the distant past to ‘prove’ he has not lost his memory. He snaps angrily when he feels he is being talked down to. His resentment expresses itself in viciously cruel verbal assaults on Anne, labelling her a disappointment, failure and his least favourite child. Then a few scenes later he’ll squeeze her shoulder and quietly and lovingly thank her for everything she has done for him. All of this is delivered by Hopkins with no grand-standing, but with a hugely affecting truthfulness. It’s an astonishingly good performance.

Every scene carefully demonstrates time and again Anthony’s fear and vulnerability. Actors are even replaced by other actors in several scenes. In Anne’s second appearance she is played by Olivia Williams. In a beautiful piece of subtle acting by both Hopkins and Williams, it’s clear Anthony doesn’t recognise Anne and she realises this but decides not to say anything. Anne’s husband (or boyfriend – Anthony remains unclear, so at times so do we) Paul (as he’s called most of the time) is mostly played by Rufus Sewell, but sometimes by Mark Gatiss. Paul is the closest the film has to an antagonist, although much of that is filtered through Anthony’s confused perception and, in any case, Paul is right that Anthony’s condition is making it too difficult for him to remain at home.

And we can see his point. Although each scene more-or-less makes sense within itself, the complete film is like looking at a jigsaw puzzle with all the pieces upside down and no picture, and then being asked to assemble it. In one particularly brilliant dinner scene, the film starts with Anthony witnessing a conversation between Paul and Anne, then loops through the scene and ends with Anthony witnessing exactly the same conversation again. The film is a deliberately, brilliantly, opaque tableau that defies easy meaning.

In all, The Father is a quite unique and brilliant film, that translates a theatrical piece into something highly cinematic. Hopkins is breath-taking, but Colman is also superb as Anne, in a part tailor-made for her ready empathy and easy emotionalism. Zeller’s direction is astonishingly confident and dynamic for a first-timer and the film slots you into the world of a dementia sufferer with an alarming immediacy. A superb film.