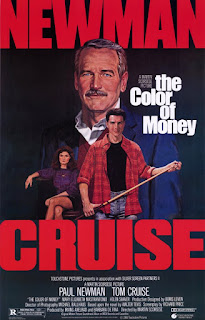 The Hustler is one of Newman’s most iconic roles. It’s remembered for his cocksure cool, leaning across the table and dispatching balls with a twinkling smirk. What people don’t remember is that The Hustler is actually more of a kitchen-sink drama than a Rat Pack party. It deals with depression, assault, corruption, injustice and suicide. It’s not even remotely a laugh a minute. The Color of Money is a belated sequel, that feels made by people who remember their impression of what The Hustler was, but don’t actually remember the tone of the film itself. But then, Scorsese intended from the very start to make an entertainment to showcase a star, so I’m sure he knew that making a real tonal companion to the original film was always going to be a no-no.

It’s 25 years since “Fast Eddie” Felsen (Paul Newman) was banished from pool clubs throughout the land by gangsters. He now earns a living selling booze to clubs, largely so he can hang out pool clubs and mentor and stake the ‘hustler’s and stars of tomorrow. The kid who catches his eye is Vincent Lauria (Tom Cruise) an exceptionally gifted pool player with a cocksure confidence and a love of the game, that perhaps reminds Eddie more than a little of himself. Vincent, and his girlfriend Carmen’s (Mary Elizabeth Mastrantonio) grifting skills leave a lot to be desired: but Eddie sees promise and takes them out on a road trip to train them up and make a fortune.

It’s a fitting title, as it’s pretty clear that The Color of Money was the main thing on Scorsese’s mind when he made this. Don’t get me wrong, this is an enjoyable and well-made star vehicle, but it’s also the only time Scorsese was a hired gun working for a star who made films he grew up watching. Scorsese has spoken openly that his main aim here was to bring it in on time and on budget (he made it faster and cheaper than that), in order to help win studio backing for The Last Temptation of Christ. (Ironically of course, most people have far fonder memoires of The Color of Money than that film, but then this is a film designed to entertain not challenge.)

It’s a fairly traditional and even predictable storyline. The mentor and the mentee, the latter jaded but rediscovering some of his old fire from the callow exuberance of the other. To be honest not very much actually happens in the film other than pool games and some predictable feuds before the final reconciliation. Inevitable lessons are learned and understandings are achieved. Compared to The Hustler, this is a very callow piece of work indeed, a straight entertainment vehicle that takes the fun, memorable beats of the original and crafts a whole film around them. In many ways you could argue it’s as much a sort of spiritual sequel to Newman’s work in The Sting as anything else.

But Scorsese shoots the hell out of it, so there is always something to look at. No end of editing and camera tricks are used for the pool games, which are shot like action sequences. Swift pans, tracking shots, sharp camera spins are all used to turn a game of knocking nine balls into pockets into something epic. Interesting shots abound, especially several sequences where a camera is mounted on a car bonnet to product an odd Steadicam effect. This is work way beyond a journey-man-pro director, but compared to Scorsese’s other works it’s minor. Scorsese opens the film by delivering a voiceover introducing nine-ball-pool, but the film never feels personal.

What it is, is a triumph for its two leading men. The year before Newman had won an honorary ‘career’ Oscar, which he accepted with a slight air of surprised resentment. No wonder, since he won a ‘real’ Oscar a year later for this reprise. To be honest, the film doesn’t ask anything particularly demanding of Newman, compared to the heights he had achieved in, for instance, The Verdict. It’s a lot of charm and aged confidence, mixed with a mentor exasperation and an unspoken concern that his powers are fading. Newman does spice things up with some interesting character work – there is a great scene when Eddie berates himself for being suckered by pool shark Amos (also a beautiful cameo from Forest Whitaker), humiliated for having lost his touch. But, whereas the first film was a below-the-skin character study, this is more like a victory parade for a charismatic star who even signs off the film by stating “I’m back!”. He’s great but not challenged.

Cruise raises game as he always does when working with legends (see also his work with Hoffman and Nicholson). The film captures perfectly both his cocksure confidence and the gentleness and vulnerability that Cruise manages to hide beneath it. You only need to see how vulnerable and scared Vincent is of being abandoned by the more sophisticated Carmen, to know that his karate moves with a pool cue while singing along to Werewolves of London is a front of a young man wanting to look like a big one to the world. Mastrantonio is pretty good in a fairly simplistic role, that is essentially a twist on a hooker-with-a-heart-of-gold.

The Color of Money offers up fairly predictable charms and plot twists and no real surprises at all. While its original film was a piece of neo-realism tinged social drama, this is a brash entertainment, stuffed with pop songs and charismatic actors doing their thing. All pulled together by a director who wanted to prove he could make something as glossy and empty as the next man. Entertaining but forgettable.