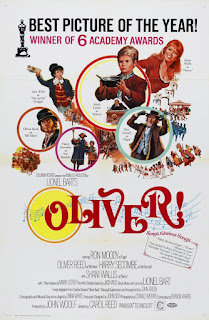 1968. The Vietnam War gets worse. The My Lai Massacre is a low-point in America’s global reputation. MLK is assassinated. Student protests rip through campuses, culminating in Chicago riots at the Democratic convention. RFK is assassinated. In the UK, Enoch Powell talks about “Rivers of Blood”. A flu pandemic sweeps the world. The USSR ends the “Prague Spring” with tanks. It was a year of horrific global turmoil. Perhaps it’s not a surprise the Oscars chose as Best Picture something as blandly comfortable and utterly disconnected from all this mayhem as Oliver! A personality-free re-tread of a successful stage musical, with a few good tunes bolstering a lobotomised adaptation of Dickens’ novel, Oliver! is so coated with sugar it must have helped the medicine of 1968 go down.

Young Oliver (Mark Lester with his singing voice dubbed) is an angelic orphan, thrown out of the workhouse for asking for “more” (Never before has such an event occurred), eventually escaping to London (Where is Love eh?). There he finds the Big Smoke to be nothing less than a wretched hive of scum and villainy. Invited by pickpocket The Artful Dodger (Jack Wild) to consider himself part of the family, he’s soon learning how to pick a pocket or two from Fagin (Ron Moody). It’s not all fun and games though: violent criminal Bill Sikes (Oliver Reed) is a wildcard, although his devoted girlfriend Nancy (Shani Wallis), the sort of girl the boys will do anything for, remains loyal to Bill for as long as he needs her. But there’s a secret in Oliver’s past – who are his parents?

Carol Reed could once make a claim for being the greatest director in the world. You couldn’t make a case for that based on this cosily chocolate-box, unimaginative trudge through a musical that has little other than a couple of catchy tunes to really recommend it in the first place. The real MVP here is Onna White, whose choreography is very impressive. White takes everyday acts and, with a little bit of jazz and a dollop of musicality, turns them into dance movements. It gives the dance numbers a heightened reality that kind of works and provides nearly everything worth looking at it in the film. Reed certainly leaves her to it, carefully setting the camera up with simple wide and medium shots to capture as much of it as possible.

And you could argue that’s his job. But he brings nothing to the other parts of the production. Of course, Lionel Bart’s musical is a much lighter affair than Dickens’ original (although, in actual fact, this is much more of a musical remake of Lean’s Oliver Twist, making many identical cuts and sharing nearly all the same dialogue), but you’d think the director who gave us Odd Man Out and The Third Man could give some drama and character to London’s underbelly. Not a jot. They have the same muted technicolour cleanliness of everything else, and any hint of ruthlessness, criminality or moral conundrums are well and truly left at the door. What we get is a world where everyone – apart from Bill – is fundamentally nice and decent, and rapacious old men using children as criminals is basically not a lot different from running an after-school club.

It isn’t helped that Oliver!, like Bart’s stage original, has a weak book that offers little light or shade for its characters other than to typecast them into simplified “goodies and baddies”. Reed and the film either can’t or won’t stretch this much further – although the film does rearrange some events of the original production to give a bit more motivational heft to actions and introduce Bill earlier to at least add a bit more tension. The film is as quickly bored with the angelic Oliver as the original is – fair enough since he’s a tediously saintly chap – with Mark Lester alternating between looking winsome and shocked at the company he finds himself amongst.

Nothing can interrupt the overflowing “niceness” of what we are seeing. Ron Moody’s Fagin had been honed from performing it on stage so often (and he is very good). But his Fagin is a cuddly uncle, the sort of grown-up scamp you would invite over for a drink, only keeping an eye on the silverware when you did. This is, let’s not forget, a bloke who colludes in murder (though the film reduces his responsibility), kidnapping, grooms kids for a life of crime and willingly lets them die for him. Not a whiff of this is allowed onto the screen. The Artful Dodger (played with a cheeky but tellingly amoral charm by Jack Wild, who tragically never hit these heights again) is given more light and shade than Fagin. 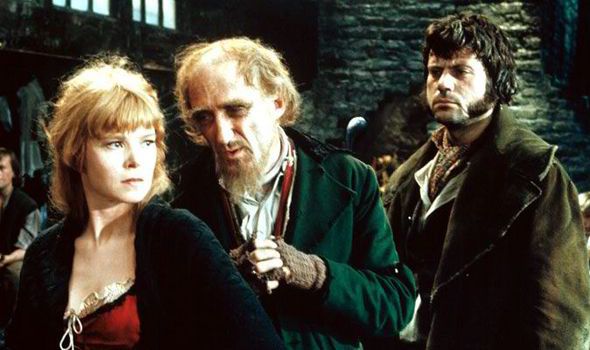 Like the musical, the film downplays the abusive relationship at its heart. Nancy is little more than a walking embodiment of the cliched “tart with a heart” trope, and the film adaptation chooses to praise her for not just sticking with her abuser, but slavishly devoting herself to him. In fact, beyond being casually kind to a child once in a while, this devotion is pretty much Nancy’s entire personality – and the film approves of it. This isn’t a dark picture of a violent man victimising a young woman, folks, it’s love! See, there’s a ballad about it and everything!

It’s a family drama so her murder takes place off screen (just her death spasm legs are seen), but you’d like to think the film could have taken a few moments to put a bit of light and shade on just why this character feels the way she does and does the things she does. In fact, the film is quite dependent on Oliver Reed, the only actor in it who dares to touch some sort of psychological depth – it’s quite telling that, even though he was a famed drunk, he’s the only member of the cast to have had any success after the film was released.

Instead, this is a great big, colourful, empty pantomime of a musical, devoid of character and (outside of its choreography) inspiration. It’s a great big explosion of tasteful sets, mugging actors, pretty colours, prancing and the odd catchy tune. It’s got no idea what the original novel was about at all, and no interest in even touching some of the themes of poverty and criminality Dickens was aiming at. Reed directs the entire thing with the indifference of a gun-for-hire.

Its syrupy sweetness and hammering tweeness leaves you punch-drunk rather than sugar-rushed. Oliver is such an insipid fella you’ll be delighted when he shuts up and sits in the background for most of the second half. It clumsily unveils a mystery and then drifts towards a conclusion that lacks any real drama. It studiously avoids anything that could remotely stretch the viewer. It’s trying so hard to charm you and hug you, it comes across like a lecherous stranger offering you sweets. Oliver! wasn’t even the best musical of 1968, let alone the best film. But in a year when the world was going to hell in a handcart, perhaps a kid-friendly fable bending over backwards to charm and reassure you was what the world needed. Doesn’t mean I need to stomach it now.