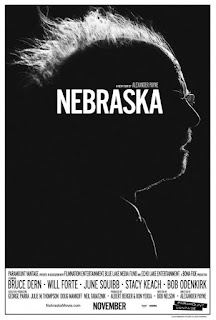 Woody Grant (Bruce Dern) is an ageing alcoholic on the edge of senility. Receiving a circular from a magazine company, he becomes convinced he has won a million-dollar sweepstake – despite his family telling him he definitely hasn’t. Eventually, son David (Will Forte) agrees to drive him to Lincoln, Nebraska, to ‘claim’ the prize. Along the way, they visit Woody’s family in Hawthorne, Nebraska – and the whole town swallows whole the idea that Woody has won the sweepstakes. Despite the best efforts of David, his mother Kate (June Squibb) and brother Ross (Bob Odenkirk), both family members and townsfolk come forward with claims for this fictional money. All this while the family themselves come to understanding about each other and their past.

Alexander Payne’s Nebraska is gently paced, meditative, but has lasting impact. Shot in a gorgeous black-and-white, this is a road movie, an odd buddy film, a family drama and a comedy of misunderstandings. All this comes together, in a way perhaps only Payne could do it, into something that at first seems like a bitter-sweet look at a dysfunctional family, but slowly reveals itself into something far more heartfelt than you expect. Nebraska carefully builds a portrait of a family that feuds, but is fundamentally loyal, even while carrying private resentments.

It all revolves around Woody himself, who at first seems to be the typical bad Dad: distant from his sons, dismissive of his wife, a history of drinking. His marriage to Kate seems based more on longevity rather than any love. Approaching senility has only accentuated, it seems, his stubbornness and self-obsession. He’s crochety and fixated on his own needs. But, despite all this – and this is a huge credit to Dern’s sympathetic performance – there is a gentleness to him. For all his negatives, he’s vulnerable and even naïve. He assumes people are telling him the truth. Later Kate will angrily denounce his grasping family, has Woody never said ‘no’ to anything he was asked to for. And you can believe it. He is a character who we see in more and more of a human light.

It comes across in the relationship with David. In an equally beautifully judged performance by Will Forte, David’s motivations for this road journey change. At first it seems an attempt to end an idee fixee, but it becomes more and more about spending time with a man he realises he loves more than he thought. Perhaps that’s because Forte’s sad-sack gentleness has more of an echo of the inner meekness of Dern’s Woody. David has more than a few similarities to Woody – a disappointing career, a failed relationship (unlike Woody’s generation, separation is a lot more feasible), a sense that his life has been a disappointment. But Payne’s film flourishes, because it becomes about David’s discovery of a kindred with his father he hasn’t acknowledged for years.

A lot of that comes from seeing the world his father grew up. A small American town, with more than a touch of The Last Picture Show, where everyone seems either stuck-in-a-rut or happy to drift. Everyone knows everyone, and there are no entertainments except feuds and sharing every piece of gossip. But, above that, David also discovers more about his father’s background: his hopes and dreams, his acts of kindness but also his acts of selfishness. His awkward relationship with his family, and the reasons behind his dysfunctional but strangely contented relationship with his wife.

All this comes together in that very Payne-ish way that is both heart-warming, slightly sentimental but genuinely moving. Above all it works, because everyone one in it feels very relatable and true. David is a highly understandable guy, a quiet fellow who hasn’t quite cracked how life works, but wants to rekindle a relationship with his father. Woody wants to cling to anything that might help him feel he has control over his own life. The saga of the fictional money starts as an item pushing the two men apart, but actually draws them closer as others in the town seek to take advantage (most nastily, the excellent Stacy Keach, claiming to be a former business partner).

That’s what helps make, what could have been a comedy about a clueless Quixote and his reluctant Sancha Panza, into something really moving. Payne may tease Woody – and even allow him to say some quite unpleasant things (his indifference as a young man to having children is a tough thing for any father to say to his son) – but he never makes him a joke. He’s just a man who seems to be looking back at his life, not quite sure how he got there. With David as an audience surrogate, wondering the same thing in turn – and half wondering whether he is going the same way.

And, of course, the film is funny. Woody and David make a wonderful flying trip to Mt Rushmore (“It looks unfinished…Lincoln hasn’t even got an ear” is Woody’s summary of it). June Squibb is very funny as David’s surprisingly foul-mouthed mother, for whom a road trip is a wonderful chance to remember all the conquests she might have made back in the day. David’s constant pleas for Woody to not mention his “win” – and the town’s total buying of this urban rumour – is very well done.

But it mixes with genuinely moving moments. Squibb’s Kate may be frustrated and fed-up with Woody, but she will defend him to the end and tenderly kisses his forehead while he sleeps. It mixes with genuine touches of regret: the extended Grant family sit and watch football together, mutely starring at the television, barely communicating. This isn’t nostalgic, but it is faintly sad about how life so quickly life can trap us into familiar patterns.

And the performances are of course sensational. Dern is incredibly heartfelt, communicating huge amounts of little dialogue and watery eyes. Fonte is superb as a man who believes he has had enough of his father, only to have his perceptions change. Squibb is both funny and heart-breaking, Odenkirk exasperated but tender, Keach a bully scared of his own empty life. It’s one of Payne’s signature works, a gentle character study that starts giving you one perception and develops into giving you a very different one. It’s one of his finest films.