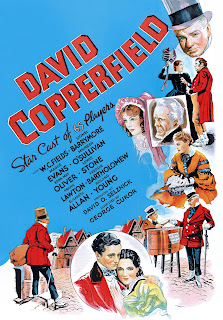 You could argue David Copperfield is one of the most influential films ever made. David O Selznick was desperate to bring Dickens’ favourite novel to the screen. But the MGM suits were convinced it couldn’t be done (800 pages in two hours?! Get out of town!) and anyway who would want to come to the cinema when they could read the book at home? They were wrong, wrong, wrong and Selznick proved that classic literature (even if it was a cut-down version of a great book) could be bought to the screen and capture at much of the spirit of the book, even if you couldn’t dramatise all the events. David Copperfield remains very entertaining, not least because it also showed you can’t go to far wrong when you assemble an all-star cast who fit their characters perfectly.

The story of the film pretty much follows the novel (with exceptions, deletions and abridgements). Young David Copperfield (Freddie Bartholomew, growing up into Frank Lawton at the half-way point) grows up loved by his mother (Elizabeth Allan) and nurse Peggotty (Jessie Ralph), but loathed by his step-father Mr Murdstone (Basil Rathbone) who barely waits five minutes after his mother passes away before dispatching David to a factory in London. There David forms a bond with the charming exuberant Mr Micawber (WC Fields) before deciding to walk to Canterbury to seek the protection of his aunt Betsey (Edna May Oliver). Growing into a young man, he faces romantic problems, the schemes of the vile Uriah Heap (Roland Young) and the betrayals of his schoolfriend Steerforth (Hugh Williams). Will all turn out well?

Stylistically, David Copperfield aims to be as true to the novel as impossible. It’s designed to look as much as possible like a series of Phiz sketches bought to life and the actors have clearly studied both novel and illustrations to craft themselves as much as possible into living, breathing representations of their characters. Well scripted by Hugh Walpole (who also cameos early on as a Vicar), the film manages to be faithful without being reverential and tells an engaging story with momentum – even if the pace accelerates a little too much towards the end. 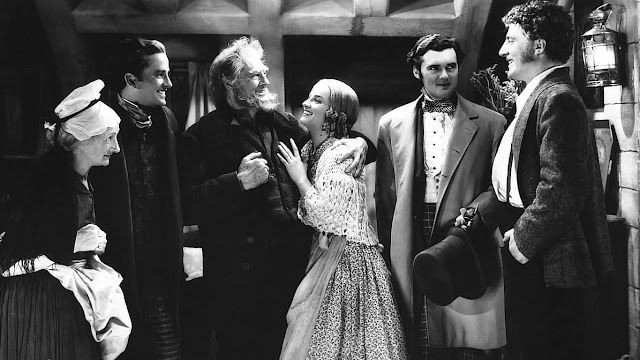 Walpole’s adaptation splits the book into two acts: the childhood of our hero and his life as young man. Giving an idea of how the momentum accelerates towards the end, this basically means the first hour of the film covers the novel’s opening 200 pages, leaving the last hour to hurry through the remaining 600. This means several characters and events are deleted, simplified or removed. However, Walpole still manages to retain all the truly vital information and iconic material, and recognises most of the striking material is found in that first 200 pages.

This childhood story is very well told, partially because Freddie Bartholomew (while he has touches of school play about him) is an affecting and endearing actor, who makes the young David a kid we care about rather than either an insufferable goodie-two-shoes or a syrupy brat. He’s a smart, kind, slightly fragile boy who we end up caring about – and it gives a real emotional impact when his mother dies (a very tender Elizabeth Allan) or to see him misused by Mr Murdstone (a perfectly judged performance of austere coldness by Basil Rathbone). Little touches of joy in his life – like the time he spends at the Peggotty’s converted ship home (a perfect representation of its description in the book) are really heartwarming, because David himself is such an endearing fellow.

It does create an obstacle for Frank Lawton when he takes over, since the audience is asked to try and bond with this new actor having already committed their hearts for just over half the run time to another. Lawton also has to deal with scenes rushing towards the conclusion rather than getting character beats like Bartholomew. Cuts impact his key relations: his school friendship with Steerforth is relayed second hand, meaning Steerforth turns up only to almost instantly let everyone down; Dora Spenlow and Agnes Wickfield get only brief screen time to establish their characters. The schemes of Uriah Heap are barely explained (he’s just a hypocritical wrong ‘un, okay?). It says a lot that the last fifteen minutes rush through the deaths of three major characters, a shipwreck, a dramatic confrontation, David travelling the world and a resolution of romantic tensions. It’s the only point when the film feels like its ticking boxes.

But it doesn’t completely matter (even if a two-part film would have helped no end – particularly allowing Lawton more room to develop a character) since the performances are so good. Expertly marshalled by Cukor – who rarely introduces visual flair, but coaches pin-perfect turns from the entire cast – every role is cast to perfection. None more so than WC Fields, for whom Wilkins Micawber became a signature part. Replacing Charles Laughton mid-filming (he claimed he looked more like he was about to molest the boy), Fields keeps his own accent and some of his own persona, but still fits perfectly into the Dickensian larger-than-life optimism and good will of Micawber. His comic timing is spot-on – watch him climbing over a roof or bantering with David and his family – and he seems like he has just walked off the page. If there had been a Supporting Actor Oscar in 1935, he would almost certainly have won it. 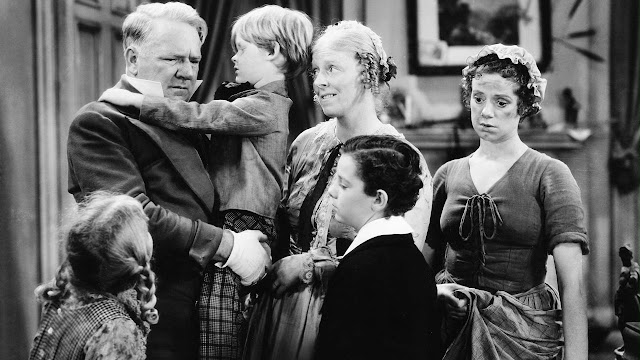 He’s the stand-out of a host of excellent performances. Edna May Oliver is very funny and has a more than a touch of genuine emotion as Betsey Trotwood. Jessie Ralph is excellent as Peggotty. Lennox Pawle makes a very sweet Mr Dick. Roland Young is the very picture of unctuous hypocrisy as Uriah Heap. Only the young women get a little short-changed: despite her best efforts, Madge Evans can’t make Agnes Wickfield interesting and Maureen O’Sullivan is rather cloying as Dora.

But the film itself is pretty much spot-on for the tone of Dickens, even if events are rushed. The impact of the Peggotty/Steerforth story is lost since we are never given the time to get to know any of the parties involved, and certain plot complexities are only thinly sketched out. But Cukor marshals the actors perfectly and throws in at least one striking shot, of Murdstone appearing in the distance as the camera follows a cart bearing David away from his mother. It always looks just right and the characters that do get the time are perfectly played, so much so that a few performances (Fields, Oliver, Young) may even be definitive.

David Copperfield proved you could turn a doorstop novel into a film and, even if you sacrificed some of the complexities (and might need to rush to fit it all in) you could still produce something that felt recognisable and true to the original. So, for that – with the mountain of adaptations that followed – we have a lot to thank it for.