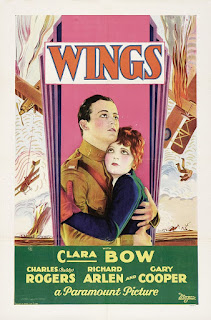 As the first ever Best Picture winner – and the only silent winner (until The Artist almost 85 years later) – Wings will always have a place in history. Is it the greatest silent film ever made? Of course not. In fact, it’s odd looking at Wings as a ‘Best Picture’ winner: with its rollicking action sequences, odd slap-stick comedy and slightly sentimental romance, it’s far more of a crowd-pleaser than the sort of film we think of as an Oscar winner. But it’s also filmed with an invention and verve that looks light years ahead of many other early winners – and a very enjoyable piece of story-telling.

It’s the First World War and Jack Powell (Charles Rogers) and David Armstrong (Richard Arlen) are both rivals for the affections of the beautiful Sylvia Lewis (Jobyna Ralston). Sylvia actually prefers David – but both she and David are too noble to let disappoint Jack when both men enlist as pilots. Jack has also failed to notice that his delightful neighbour (literally the “girl next door”) Mary Preston (Clara Bow) is in love with him, and that she is perfect for him. Jack and David train as pilots – a dangerous profession – and head for the front and become best friends and comrades in arms. Mary follows them to serve as a nurse – but Jack is still convinced he is in love with Sylvia, completely ignorant of the fact she is engaged to David. Will these romantic problems solve themselves, while the two men fly into dog fights in the skies?

Wings is a fabulous reminder of how dynamite and dynamic Hollywood could be before the Talkies and those years of reduced camera movement to capture live sound, with more stately editing and composition that continued to hold influence over film-making for much of the next fifteen years. I loved the visual invention of this film. Wellman pushes the camera into unusual positions and uses some truly unique shots. In an early scene Wellman straps the camera to a swing David and Sylvia are sitting in. We swing and sway with the swing, in an advance feel for what it’s going to be like in the dogfights to come. When Jack runs into frame, he actually looks wild rather than the characters on the swing (fitting considering his personality).

Wings is full of invention like this. It has a hugely influential tracking shot, which zooms across a number of tables and couples in a Parisian restaurant, getting closer and closer towards and intoxicated Jack and finally zooming in on his champagne glass. This is the sort of stuff you wouldn’t see in a Hollywood movie again for decades to come.

It all carries across into the dog-fighting scenes that will come. Wellman shot the film among the skies, with cameras following the action, others strapped to the planes to capture the actors faces (who are really up there!). Clouds are frequently used to communicate the speed the planes were moving at. Hundreds of stunt and military pilots took part in these re-staged battles which are still, despite the advances since, hugely impressive. Wellman, a former WW1 pilot, even took to the skies himself briefly when a pilot fell ill. Planes swoop, dive into clouds and plummet to the ground trailing smoke. It’s all shot with a boy’s own adventure and makes for gripping action.

The film is also a realistic look at the horrors of war, something Wellman was extremely aware of. When the action gets down into the trenches it doesn’t shirk in showing the costs of warfare, close-ups and tracking shots capturing the violence and human cost. Bodies slump in death. A tank looms over the camera. There are moments of realism: a sergeant, marching along the road, nudges a resting private only to discover (as his body slumps forward) that the man is dead. At first the sergeant marches on then he turns back, salutes and gently puts out the man’s cigarette. It’s a thoughtful little moment of human reaction in a film full of them. 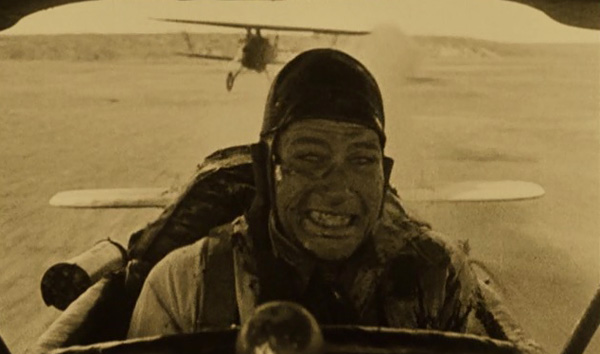 It sits alongside an almost Pearl Harbor-esque plotline of romantic entanglements and confusion. Charles Rogers’ Jack is an enthusiastic, passionate but almost wilfully blind, bowled along with passion for anything that takes his interest from Sylvia to flying to his friendship with David. There is something quite sweetly old-fashioned – almost a fairy tale – about David and Sylvia keeping quiet about their love, so as to give Jack something to survive for. Richard Arlen is more restrained, but gives a decent performance. There is more than a hint of the homoerotic between Jack and David, the more exhibitionist acting style of the silent movies lending itself to an idea that the real love affair here is between these two rugged pilots (who wrestle, cuddle and even kiss), but that’s probably wishful thinking. Saying that though, the film is surprisingly daring: that French restaurant clearly has gay couples among its clientele (not to mention later a brief pre-code nude scene for Clara Bow).

But it’s still a straight-laced action film, where men are men with a key sub-plot of Mary’s unrequited love for Jack. Clara Bow, one of the biggest stars in Hollywood, landed top billing as Mary and you can almost feel her physical pain at her obvious devotion going unnoticed time and time again. Mary is basically a saint – and the film misses a chance to really explore her experiences as a Nurse on the Western Front – and to be honest her plot line is rather shoe-horned in to give a bit of feminine interest to an otherwise male-heavy plot.

It’s part of what makes Wings at times overlong. There is a slimmer two hour or so film about wartime flyers waiting in here, but Wellman’s film tries to do so much (war is hell, love, romance and rivals turned friends) that the run time balloons up to fit it all in. That stunning restaurant shot is part of an otherwise rather pointless extended “comic” sequence, involving Jack getting pissed and gleefully watching champagne bubbles (that fill the screen) before being saved from a French floozy by Mary, that outstays its welcome. The sequence largely exists to give Clara Bow something to do, but is neither particularly funny or memorable.

Certainly not compared to the action, or the moments of sadness and melancholia from the war. Gary Cooper, in one of his first roles, supplies a one-scene turn as an ace pilot who immediately dies in a training accident: we are never allowed to forget the dangers and loss of war. When our two heroes leave their lucky charms behind before flying out on one more mission, you know that things won’t go well. Wings ends with a tragic mistake and a sad homeward return coda where we really feel the cost of loss. It’s a film that maybe wrapped up in flag-waving heroics and daring-do, but has lots of genuine heart beneath the action. Sure, it’s overlong with a rather obvious romance, but it’s got more than a little brain among the thrills.