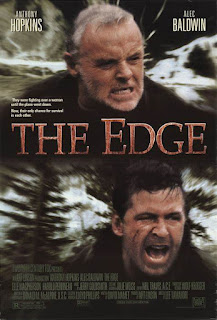 During a trip to a remote part of Alaska to celebrate his birthday, millionaire Charles Morse (Anthony Hopkins) is stranded hundreds of miles from rescue after a plane crash. The only other survivors are Robert (Alec Baldwin), a photographer Charles suspects of having an affair with his much younger wife Mickey (Elle Macpherson), and Robert’s assistant Steve (Harold Perrineau). Their best chance for survival may well be Charles’ photographic memory and his recall of all sorts of knowledge, recently topped up by reading a survival book. They’ll need it if they are to defeat and kill a man-hunting grizzly bear that swiftly dispatches Stephen.

With a script by David Mamet and some tight, tension-filled direction from Lee Tamahori, The Edge is a well-above average survival film where the main interest is less on the methods of survival than on the spiky, punchily-written interplay between Hopkins and Baldwin. The style of both actors – Hopkins channelling a zen-like calm, while Baldwin goes for a spiky flamboyance masking vulnerability – makes them a very well-matched pair and ensures The Edge constantly has something to entertain and intrigue in every scene.

The Alaskan outback is beautifully filmed, but still oppressively dangerous – a vast canopy of nothing but trees, mountains and snow. The film conveys a brilliant sense of the intense cold – our heroes almost die immediately due to exposure, after crashing into ice cold water – as well as the never-ending difficulties of navigating and surviving in the wilderness (almost inevitably their first day is spent walking in a large circle).

That’s before you even take into account the bear. Much of the film is taken up with Charles and Robert setting aside their differences to take on this killer creature, dodging its advances and finally laying a trap to slay it. Played by experienced acting bear Bart – who even gets an extra special credit all of his own – this creature serves as a superb embodiment of all the natural obstacles our heroes are facing, a running and clawed representation of the dangers of the wild made flesh. It also makes for a series of very tense confrontations.

What’s fascinating about the film though is that the real outback hero who emerges is not the jet-setting Robert, but the bookish and reserved Charles. This is one of the few films where a photographic memory and an ability to stay calm and collected make for practically superhuman skills. Hopkins is very good as Morse, a thoughtful man who surprisingly finds a greater sense of purpose and drive in the wilderness than he ever had in his business life. Mamet’s script delights in the titbits he has memorised, from building compasses to celestial navigation and the psychological requirements for staying alive in the wilderness.

Hopkins’ coolness is used to great effect – even if Charles seems an unlikely millionaire businessman – and contrasts wonderfully with Baldwin’s energy in the showier role as a weaker man. The Edge – originally titled by the even less inspired name of Bookworm – rather sweetly celebrates the virtues of wide-reading, education, curiosity and intellectual magpieism and shows how these qualities can be turned to life-saving effect. Charles turns out, to a certain extent, to be in his element – and without a doubt without him everyone would have died long before the inevitable rescue helicopter.

The Edge also covers a neat line in psychology. A constant refrain is that psychological collapse – a sense of giving up, rooted in ‘shame’ and assumptions that their fate must be deserved – is the key danger to survival. It’s a theme that the film constantly returns to (perhaps a little too much at times), but also ideas that I’m not sure survival films have focused on so keenly before. Usually in these suggestions gruffness and manly qualities are celebrated, but The Edge suggests that the wilderness is a great leveller and sometimes skills we did not expect become crucial to our survival. Sure, Charles sets about killing the bear with a ruthless determination – but his plan to do it is rooted in his learning and mastery of trivia.

The Edge doesn’t rework the wheel, but it’s a lovely piece of B-movie film-making, full of tension, fine dialogue and some impressive acting.