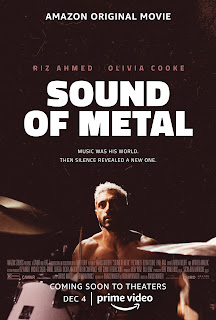 Ruben Stone (Riz Ahmed) is a recovering drug addict and drummer in heavy metal duo Blackgammon with his singer girlfriend Lou (Olivia Cooke). Touring together, their life is made up of performing gigs across the States. That changes overnight when Ruben suddenly loses his hearing, with a diagnosis confirming 80% of his hearing is gone and what’s left may only disintegrate further. With Ruben sliding into depression, Lou helps him find a place in a deaf recovering drug addict camp run by Joe (Paul Raci). There Ruben must learn to adjust to a life without hearing – and decide whether or not he will undertake a hugely expensive ocular implant surgery to try and restore some vestige of his hearing.

Sound of Metal is an extremely thought-provoking and highly immersive piece of cinema. It’s extraordinarily well-edited and shot and its sound design is faultless. I can think of few other films that so successfully throws the viewers into its main character’s experience. Much of the opening Act is a stressful, tense and even terrifying, watch as Ruben’s isolation, fear and frustration is powerfully communicated to the audience. An early morning routine is shown first from a “hearing” perspective then the next day in chilling silence. Sign language goes untranslated onscreen until Ruben has learnt it, we can barely see the notes Lou is forced to scribble to communicate with him. It all gives a powerful sense of the terror and loneliness of Ruben’s isolation.

The film also skilfully enters the debate around the treatment of disability. Joe’s colony is founded on the principle that deafness should not be ‘treated’ as an illness or a problem to be fixed, but instead as a part of a person’s identity, with presents challenges which can be rewardingly overcome. It’s an attractive and admirable idea, and the points the films make about removing the stigma and shame of disability (a perverse shame consumes Ruben about his deafness). But on the flip side, if you had lost your hearing wouldn’t you be attracted to a surgery that might help restore part of that? Is that wrong – even if it’s a betrayal of what Joe believes in?

The real issue is Ruben’s motivation for continuing to pursue surgery: because he is ashamed of being deaf. One of the beauties of the film is how it avoids straight forward and trite solutions to its problems. There are no simple answers and no Hollywood endings in Sound of Metal. All the characters make mistakes, and many remain unresolved. Obvious narrative tropes are side-stepped: it looks like Ruben is travelling the familiar arc of self-loathing into evangelical convert. This predictable narrative is avoided. Someone can still be a warm supporter of other people and yet also lie and cheat to make improvements in their own lives.

It’s the secondary plot in Sound of Metal: Ruben, an addict, becomes addicted to the idea of hearing again. Told early by a doctor – and the film is a damning indictment of the money-first nature of American healthcare – that a treatment might cure him, Ruben fixates on this. He ignores the risks (it will destroy his remaining hearing) and negatives (it will never be like actually hearing again) and disregards and ignores any other options. In turn, you can argue Joe – so concerned with his evangelical stance and maybe even a little smug in his purity – fails to identify Ruben’s personality flaws and places undue pressure on him to swiftly follow directly in Joe’s footsteps.

All of which makes Sound of Metal sound rather depressing. But it truthfully isn’t. It’s just a film that’s beautifully in tune with real life. It understands that relationships and friendships can change and drift apart over time, due to changes of circumstances, without heartbreak or resentment. That the person we need at a particular point in our life, might not be the person we need later in life. Ruben is a complex, troubled person, but he’s also a decent, good one quick to offer acts of great generosity and kindness. It’s the part of his personality that would make a good teacher of deaf children (a role he engages in with delight while living in Joe’s camp). But it sits alongside an addict’s tendency to put his own desires first and assume others will fit in with them.

In some ways the film is a dramatization of mourning. Ruben must learn to mourn the loss of his hearing and this ending of his dreams of becoming a star – even with his implants he will never have the same affinity for music as he had before. We see him go through shock, pain, anger, depression and the film shows him just beginning the process of acceptance and hope at its conclusion. But the film doesn’t lie about this being a difficult and challenging journey – and one where mistakes will litter the path.

As Ruben, Riz Ahmed gives an outstanding performance. Fully committed – he spent months learning to drum and speak ASL – Ahmed is powerfully emotional, and much of the film’s success in immersing us in the horror of finding yourself suddenly isolated, scared and confused is due to the rawness of his performance. Ruben is a man of strong feelings and loyalties, loving and caring but also angry and defiant. You understand every inch of his frustration, even if you sometimes want to slap him for being selfish. Just as good is Olivia Cooke as Ruben’s supportive and fragile girlfriend Lou. Paul Raci – son of death parents, playing a character heavily derived from his personal story – is superbly genuine as the caring but overly evangelical Joe, a mentor who blinds himself to things in his protégé he doesn’t want to see.

Sound of Metal is beautifully shot and filmed by Marder. It expertly builds our empathy with Ruben and his situation – helped hugely by Ahmed’s superb performance – and allows us to feel an uncomfortable fraction of what it must be like to find yourself suddenly isolated in the world. It enters with fascinating points on both side, into a very even-handed debate on disability and its treatment (or not), but never forgets it is also telling a very real, human and emotional story. Side-swiping conventional narrative tricks, it’s highly engaging, a superb piece of technical film-making and brilliantly done.