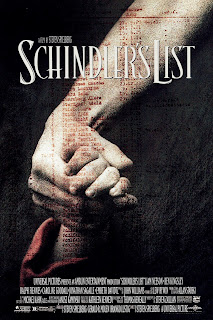 It was the film Spielberg spent over a decade building up the courage to make. Schindler’s List not only marked a new era for him as a film-maker, it also helped a wider audience directly confront the horrors of the Holocaust. At a time when Holocaust denial was starting to rise, Schindler’s List straight-forwardly but powerfully placed the reality of this crime firmly in the eyes of the world. Schindler’s List today remains one of the most emotionally powerful Holocaust movies, the standard to which all others are judged – and peerless example of committed and passionate film-making.

Based on Thomas Keneally’s Booker-prize winning “non-fiction novel” Schindler’s Ark, the film is set in Krakow during the Second World War. As the German occupying force crowds the Jews into the overcrowded Ghetto in the first step of what will become systematic extermination, Oskar Schindler (Liam Neeson) arrives in town looking to make his fortune. Charming, gregarious and quick with a bribe, Schindler soon makes friends with senior SS members. Setting up an enamelware factory to supply the Wehrmacht, it is staffed entirely by cheap Jewish labour (supplied by the SS) and run by skilled Jewish accountant Itzhak Stern (Ben Kingsley) while Schindler handles ‘public relations’ (bribes and schmoozing) with the SS. But, over time, Schindler struggles more and more to close his eyes to the murder of the Jews – a fact made even more prominent with the arrival of brutal SS commander Amon Goth (Ralph Fiennes).

Schindler’s List is chillingly, shockingly honest in its depiction of the horrors of the Holocaust. But it’s easy to forget how cunningly and gently it eases you into the nightmare you are about to watch. This is after all a film that uses Schindler as its POV character. What we are experiencing is his perception of the Holocaust, and through that trying to grasp what could potentially have made this opportunist and profiteer into a humanitarian. As such, the film is careful to give a slow build to the monstrous genocidal fury of Nazism.

In fact, much of the first thirty minutes could almost play out as a sort of triumphant against-the-odds success of a morally flexible charmer. There are a surprising number of laughs in that opening thirty minutes, at Schindler’s chutzpah and weakness for a pretty face. The opening sequence is a delightful demonstration of his confidence: we know he has nothing but the clothes he stands up in and what cash he can scrape together when he enters a nightclub frequented by the SS bigwigs we needs to impress. When he walks in no-one knows who he is: by the end of the evening a waiter is dumbfounded another guest doesn’t know who Oscar Schindler is. Much of the first act is a chronicle of Schindler playing the angles, crossing the right palms with silver and charming left right and centre to make himself a somebody from nothing.

Imagine you didn’t know what the Holocaust was. You’d think this could be a very different film. There are clues: the unspoken loathing Ben Kingsley’s Itzhak Stern clearly feels for this man who smilingly hires cheap Jewish workers from the SS (the workers get nothing) to staff his factory. The fear any Jewish character expresses when confronted with a German officer. The desperation and dirt of the Ghetto. But, like Schindler, there is enough there for you to think “yeah, it’s tough on the Jews, but it’s could be worse, it’s not my problem”.

Schindler wants to be thought of as a good man, but deep down he knows he isn’t: you can see his discomfort when he’s thanked by a one-armed man Stern has inveigled into working in the factory. He already knows he doesn’t deserve thanks – guilt that expresses itself at anger against Stern for hiring a one-armed ‘machinist’ in the first place. After all he’s running a business here. 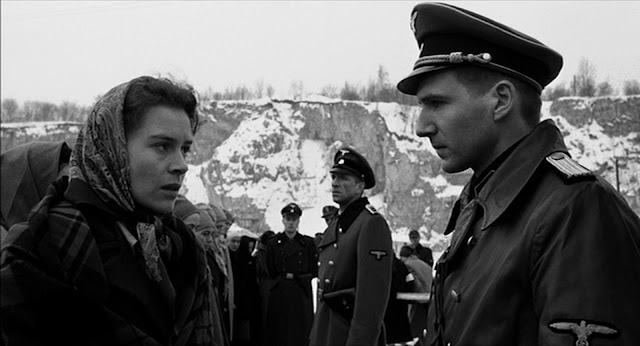 That one-armed man is the first death we see, executed at a roadside for not being able to shovel snow from the road. Any chance of turning your face away again is lost with the arrival of Amon Goth to liquidate the Krakow Ghetto and build a new concentration camp. Played with a bloated, dead-eyed sadistic sadness by Ralph Fiennes (Goth bitches constantly about his workload, drinks to excess and is as desperate to be liked as he is uncaringly brutal), Goth oversees acts of inhumanity that leave the viewer shocked and appalled.

Spielberg films the liquidation of the Krakow Ghetto like a documentary observer and doesn’t flinch from the brutality: summary executions, dead bodies left in the street, the late night slaughter of any hiding in the Ghetto. Doctors euthanise their patients (who drink the poison with thanks in their eyes) before SS guards can machine gun them in their beds. Spielberg embodies this in a single red-coated girl (one of the few splashes of colour in the film), who walks through this nightmareish hell, witnessed from a hill by the horrified Schindler. Later the same red-headed girl will be wheeled on a cart of twisted, exhumed bodies to be thrown onto a bonfire of rotting corpses.

It’s but an entre into the nightmare of Goth’s camp and the later hell of Auschwitz. In the camp, Goth snipers those not ‘working’ from the balcony of his hilltop villa. Anyone can be executed at any time. Selections see naked inhabitants of the camp running in circles, the weak pulled out to be dispatched to the death camps. Mountains of corpses are burnt, their ashes falling like snow on Krakow. Later, a misdirected train of Schindler Jews arrives in Auschwitz where human ashes form a constant mist. Terrified the women are stripped, their hair removed and herded into a shower room: the terror of this sequence alleviated only when water not gas falls from the shower heads. Spielberg shoots all this with a careful but horrific immersiveness, which never lingers on horrors but always acknowledges them while moving you onto the next terror.

You can criticise Schindler’s List for focusing on the few thousand who survived this senseless barbarism rather than the millions of dead – but the film offers a cause for hope. That, even when things are at their worst, people can decide to do good. Itzhak Stern (a beautifully judged, deeply humane performance from Ben Kingsley) calls the list “an ultimate good”, with everything around it evil. Faced with such horrors, perhaps we need to know that a man like Oscar Schindler can turn the skills he used to enrich himself towards saving lives: bribing officials, spinning stories, presenting a front to his SS partners of an uncaring businessmen while saving as many lives as he can.

Played with huge charm and authority, mixed with a fascinatingly unknowability by Liam Neeson, the film bravely never offers a definitive answer as to what turned Schindler into a man dedicated to others rather than himself. There is no single moment where he makes the conscious turn, instead the film presents the shift as a gradual but inevitable change: as the real-life Schindler himself said, in such a situation there was no other choice.

Schindler’s List isn’t perfect. Despite his best efforts, Spielberg’s sentimentality creeps in. Neeson’s final scene takes things too far, culminating in a blatantly manipulative breakdown, weeping that he did not do more – as if Spielberg is worried we didn’t get the point. Some moments lean into Hollywood convention, from Goth’s gun repeatedly misfiring when attempting to execute a worker (who survives) to Goth and Schindler cutting cards to decide the fate of Goth’s brutalised maid Helene (a sensitive and heartfelt Embeth Davidtz). But what it gets right far outweighs this. 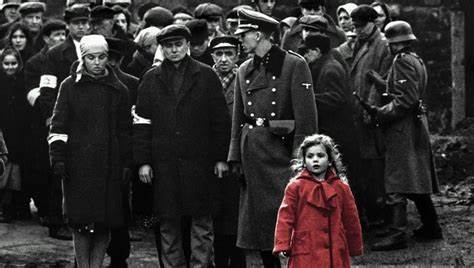 Spielberg presents the Holocaust with unflinching emotion and a carefully controlled sense of moral outrage. Beautifully (some argued too beautifully) filmed by Janusz Kaminski in cool black-and-white with a sensitive score from John Williams, it introduced the Holocaust to an entire generation. No other director could perhaps have done that.

In a sense Spielberg’s career was building towards this, his mastery of cinematic language (this is a superbly edited film by Michael Kahn) utilised not for thrills but to illuminate one of the darkest hours of history. But with that, it also provides hope for humanity, perhaps the key to its emotional impact. The acting is sensational – Neeson has never been better, Fiennes is extraordinary, Kingsley far too easily overlooked as the film’s heart. Traumatising, horrifying but vital and essential, Schindler’s List brings to life with deep respect the worst of history.