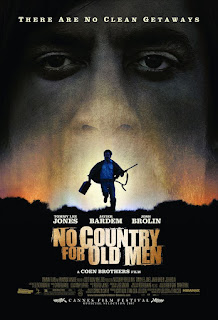 The borderlands of America. A vast panoramic countryside, where times may change but the underlying violence and savagery continues to lurk just under those dusty plains. It’s ground the Coens have explored before, but perhaps never with such mastery as in No Country For Old Men, a film that mixes the style of a classic Western with the nihilism and bleakness of their most challenging work, all capped with just a hint of their incomparable quirky black humour. A pitch-perfect adaptation of Cormac McCarthy, No Country For Old Men scooped four Oscars, including Best Picture.

In the border Terrell County in Texas in 1980, a Vietnam-vet and welder Llewelyn Moss (Josh Brolin) stumbles across a drug deal gone wrong in the desert: several dead men, a truck full of drugs and a suitcase containing $2 million. Taking the case, Moss sends his wife Carla Jean (Kelly MacDonald) to her mother’s for safety and flees first to Del Rio then Mexico to try and keep the money. Unfortunately, he’s being followed by relentless, psychotic hitman Anton Chigurh (Javier Bardem) who will stop at nothing to fulfil his contract – and heaven help anyone who gets in the way. Trailing in their wake is worn-out Sheriff Ed Tom Bell (Tommy Lee Jones), who feels increasingly adrift in a violent world he no longer understands.

The Coen’s film is a bleak, pessimistic and doom-laden look at man’s inhumanity to man – all of it watched with a weary sadness by Jones’ tired Sheriff, in a hauntingly gentle performance. The vision the Coens present is a world that may have moved on in decades from the Wild West, but still has that era’s cavalier regard for life. Life is very cheap in No Country For Old Men and even the slightest mistake, hesitation or act of kindness can have horrific consequences. It’s a film where death is a constant, terrible surprise – so much so it claims the life of one significant character entirely off-screen and can be handed out on the basis of a coin toss.

That coin toss will come at the prompting of Chigurh. Played with an Oscar-winning calm voidness, by an unworldly Javier Bardem, Chigurh is relentless, merciless and completely detached from humanity. Emotion is a complete stranger to him, other than a pride in his work and a capability for being irritated by a non-co-operative target. Chigurh sees himself as an instrument as fate, a nihilistic view where individual choice is removed from the equation. In one chillingly memorable scene, he relentlessly but with a terrifying calm gets a gas station attendant to call a coin toss: the attendant struggles to understand what he’s wagering, but it’s all too clear to us – and in case we miss the point, Chigurh urges him to keep the coin afterwards as it’s a momentously lucky object.

There’s a possibility that this is how Chigurh rationalises the world to himself. He is absolved of all moral consequences for his actions, as everything is pre-ordained, objects and people travelling to predetermined outcomes. It’s a viewpoint another character invited to toss a coin late in the film will firmly reject, saying all Chigurh’s actions are a choice. They’re probably also right. Chigurh kills throughout the film partly because it’s the most expedient way to get what he needs – from a car, to escaping a police station – but also because of the pride he takes in his work being the best, and anything obstructing that should be punished. He has no regard or interest in the money or even for his employers, all of them disposable in the pursuit of doing his job well. It’s perhaps not a surprise that a survey by psychologists named him the purest psychopath caught on film. 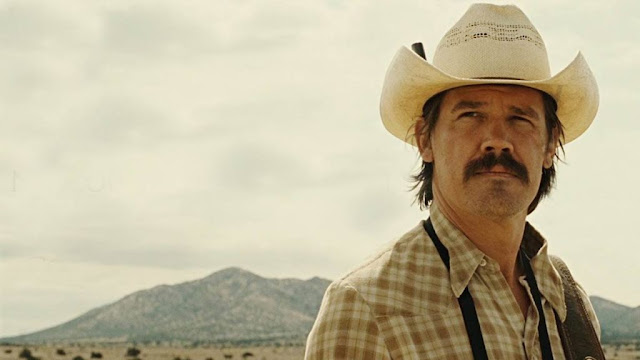 Pity those who cross his path. Compared to him, Woody Harrelson’s professional hitman is just that: a guy doing a job rather than an elemental, unstoppable force of nature (Harrelson is superb as a charming, slightly cocky pro, who accidentally gets in over his head). In many ways, it makes it even easier to root for Josh Brolin’s Llewelyn Moss as he tries to stay one step ahead of him with his ill-gotten gains. In a breakout role, Brolin makes Moss the quintessential everyman, with just enough touches of grace and decency to make us overlook the fact that he’s an opportunist putting himself and his family at risk to steal drug money. Moss is such an underdog – but also so ingenious and determined – he becomes the perfect person to root for.

The film largely chronicles the battle of wits between Llewelyn and Chigurh across Texas and Mexico, the two of them carrying out a hunter-tracker dance that has echoes of similar duels from directors like Leone. In one set-piece moment after another, we see their coolness under fire, as well as their focused determination to get what they want, regardless of cost. Brolin’s performance is a superb slice of taciturn Texan-ness, with just enough decency to get him in trouble: from protecting his wife, to taking water back for an injured man, to rejecting the advances of a poolside floozy. It’s interesting that he invariably ends up in more trouble when he tries to do something good – but such behaviour sets him aside from Chigurh and lets us know he’s one of us.

All this bleakness is followed with sad-sack sorrow by Tommy Lee Jones’ sheriff, whose eyes speak of endless, uncountable horrors that fresh ones don’t even seem to shock him anymore. Jones bookends the film with two superb monologues, that reflect on what seems like the increasing brutality of the modern world. But the Coens are smart enough to know that this sentimentality is misleading – Bell’s uncle Ellis (a fine cameo by Barry Corbin) tells him frankly that the world was ever thus and its naïve to think otherwise. This is also one of Jones’ finest performances, a tragic Homer, totally ineffective, reduced to following around and picking up the pieces.

All of this plays out without hardly any trace of a music score – Carter Burwell’s scant score makes use of everyday sound and hints of music at a few dry moments – hammering home the coldness and bleakness of it all. Excellently shot by Roger Deakins, whose classic, restrained, pictorially beautiful presentation of the West brings back a truckload of cinematic memories, the Coen’s film still finds room for dashes of dry humour. Sure, it ends with a nihilistic comment on the horrors of the world and our hopelessness in them, but there are small shoots of hope growing in there if you look closely. They are well hidden, but they are there.

No Country for Old Men is perhaps the Coens’ most fully rounded, morally complex, intriguing and dynamic film, a wonderful mix of the style of their earlier work with the bleakness of Fargo and just some touches of the wit they displayed elsewhere. Cormac McCarthy is the perfect match for two masters, whose direction is as faultless as their script. It’s a film that rewords constant viewing and is constantly shrewd and terrifying in its analysis of the human condition. Essential watching.