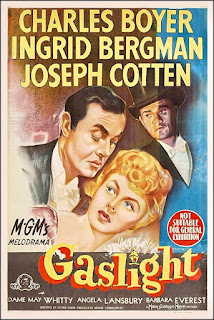 Spoilers: Spoilers here in for Gaslight both film and play

Paula Alquist (Ingrid Bergman) has terrible memories of finding her aunt, a world-famous opera singer, murdered in their home on Thornton Square when Paula was just fourteen. Years later she falls in love with, and marries, the charming Gregory Anton (Charles Boyer) who suggests she returns to London and her old home. To save his wife’s nerves, Gregory has all her aunt’s property moved into the attic. But then Alice starts to lose items, Gregory tells her she moves things and has no memory of it and at night she sees the gaslight dim and hears strange creaks in the attic. Is she slowly going mad as her husband insists? Or is she – and this is where the word comes from – being gaslit into thinking so by a husband who isn’t as nice as he seems?

Adapted from Patrick Hamilton’s play, George Cukor’s bring a sumptuous version of the iconic story of a decent wife manipulated by a bad husband to the screen (MGM allegedly tried to destroy all copies of a British version from 1940 so this could be the ‘only’ adaptation). While the original play is a claustrophobic one-set affair, using minimal characters and taking part in a narrow window of time, the film expands and deepens the stories timeframe and uses a host of locations to build-up Paula’s isolation and mounting insecurity. It’s a subtle and extremely well-handled costume-noir thriller, that holds it cards close to the chest and is powered by excellent performances.

It also makes several genuine improvements to the original play. There, the villainous husband is trying to drive the wife mad so he is no longer constrained by her presence while he searches the house he has purchased for missing jewels. It’s not clear why the villain has saddled himself with a wife (when his life would be much easier if he was a single man). The film improves this immeasurably by making marriage to the wife an essential prerequisite to the villain gaining entry to the house. This one change unknots many problems with the original play and also raises the stakes considerably, by increasing the personal connection to events from the wife.

Giving a traumatic backstory to the re-named Paula (all the names are changed from the play), also gives Ingrid Bergman far richer material in her Oscar-winning role. Bergman’s Paula is already nervous and vulnerable from the start, and her desperate need for love and security draws her inevitably towards a man who, even before we work out he’s a wrong ‘un, offers her a sort of fatherly reassurance. Bergman’s heartfelt performance also contains a streak of independence and determination: she struggles painfully with knowing she isn’t insane, even while being told she might be. The film also gives her a greater sense of agency, and Paula’s final act payback works as well as it does, because Bergman has made her gentleness so under-stated earlier, that her sudden iron and fury are even more striking.

Opposite her is an equally fine performance from Charles Boyer. Boyer inverts his charm and suaveness into a ruthless opportunist, devoid of morals, who takes a sociopathic delight in his own cleverness, even as he semi-regretfully mentally tortures and manipulates his wife. He’s never less than charming – making it all the more unsurprising that Paula places as much faith in him as he does – but the little marks of danger and control are there throughout. Cukor uses a wonderful shot early on of Paula disembarking from a train, at which point a hand enters frame and grasps her arm – it’s revealed as Anton, but a brilliant indicator of his threat and controlling nature. Truth is, Gregory is insane, and Boyer subtly suggests this throughout: there is another lovely shot from Cukor late on where studio lights are reflected in Boyer’s eyes giving him an insanely intense gaze.

It all revolves around finding those diamonds. If there is one area that film is slightly weaker is that it doesn’t actually dedicate much time to that dimming gaslight or those creaking floorboards at night. It feels like a beat that should be hit more regularly (a montage would have helped no end), a more constant presence would have helped make it a more convincing continual dread for Paula. 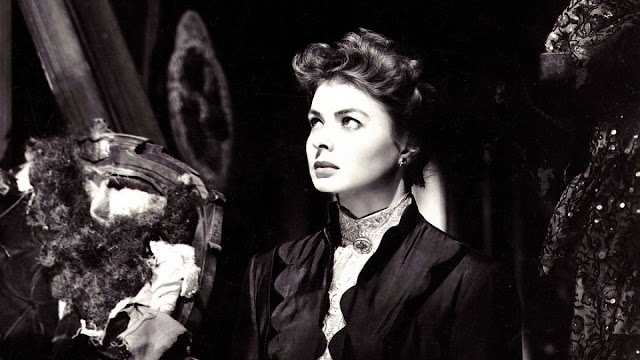 But its counter-balanced by the expansion of the film to multiple locations where Gregory manipulates Paula to disgrace herself in public. From a lost broach in the Tower of London to an evening soiree where she is made to appear as if she has stolen a watch, it all helps to tip Paula more and more into believing she is losing her mind. Again, Cukor keeps the focus within all this finery very much on our two leads, reproducing for us as much as possible the growing claustrophobic fear that is consuming Paula that was as at the heart of the stage production.

The moments away from this are slightly less strong. Joseph Cotton has a thankless role (with an awkward mid-Atlantic accent) as a police inspector, who smells a rat or two. The ‘investigation’ moments around this are often heavy handed, and labour under the sort of exposition that the scenes between Gregory and Paula skilfully avoid. Basically, Inspector Cameron barely has a personality, meaning he never really develops beyond being just a plot device.

Conversely, a character who takes on a great deal more presence is Angela Lansbury’s star-making turn as a sultry, defiantly sexual maid, parachuted into the house for goodness-only-knows what reason (!) by Gregory, who takes every opportunity to undermine her mistress. It’s a brilliantly pointed little performance from Lansbury, full of sass and smirk (it got her an Oscar nomination in her first movie) that adds even more to the feeling of Paula being a stranger in her home.

Gaslight is all smartly directed with Cukor, brilliant as always with actors, adding more visual flair than he often does with his fog-filled London and noir-tinged Edwardian home. With strong performances and many changes that materially improve the original material, it’s a fine adaptation.