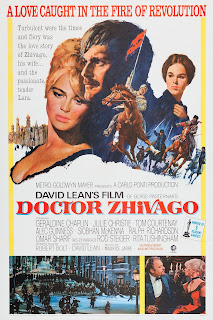 Boris Pasternak’s Doctor Zhivago is one of the seminal 20th century novels. Smuggled out of the USSR after being refused publication, it became an international sensation and led directly to Pasternak winning the Nobel Prize (although the USSR insisted he turn it down). A film was only a matter of time – and who else would you call but David Lean, master of the pictorial epic, to bring the novel about the Russian Revolution to the screen. Lean – with his masterful Dickensian adaptations – was perfect in many ways but Doctor Zhivago, for me, is the least satisfying of his ‘Great Films’. It’s strangely empty and sentimental, lacking some of the novel’s strengths zeroing in on its weaknesses.

Yuri Zhivago (Omar Sharif) is training to be a Doctor in the years before the outbreak of the First World War. Married to Tonya (Geraldine Chaplin), the daughter of his father’s old friend Gromeko (Ralph Richardson), Yuri is part scientist, part poetic free-thinker. Events throw him together with Lara (Julie Christie), a young woman whose fiancé Pasha (Tom Courtenay) has ties to the revolutionaries, while she is trapped in an abusive relationship with the amoral Komarovsky (Rod Steiger). But are all these troubles worth a hill of beans in a country about to tear itself apart?

There are many things you can’t argue with in Lean’s film. It is of course unfailingly beautiful. Ironically filmed in Fascist Spain, it’s gorgeously lensed with a luscious romanticism by Frederick Young (who won his second Oscar for a Lean film). It’s not just pictorial beauty either: Young frequently makes wonderful uses of splashes of Monet red to dapple the frame. From poppies in a field to the ubiquitous communist imagery on uniforms and walls. There are some wonderfully cool blues employed for the snow, while slashes of light pass across eyes with a gorgeous lyricism.

Romance is the name of the game, with everything working overtime to stress the star cross’d lovers plot. Maurice Jarre’s score – in particular its balalaika inspired Lara’s Theme – mixes Russian folk inspirations with an immortal sense of longing. It plays over a film that, while very long, often feels well-paced, even if (just as the novel) its episodic and at times rambling. Lean’s direction of epic events revolving around personal loves and tragedies is still exquisite in its balance between the grand and intimate. The film is wonderfully edited and a fabulous example of long-form storytelling.

So, what’s wrong with Doctor Zhivago? In a film with so much to admire, is it possible Lean and co spent years working on something only to bring the word but not the spirit to the screen? The key problems come round to Zhivago himself. This is man defined by his poetic soul. His poetry becomes a sensation after his death. His balalaika is a constant companion, and his playing of it an inherited gift (which even has major plot implications). Inexplicably, the film has not a single word of poetry in it (when it had Pasternak’s entire back catalogue to work with) and Zhivago never so much as strums the strings of his balalaika. It’s like filming Hamlet and then making him a mute.

The problem is, removing the character’s hinterland makes him a rather empty character. Zhivago is a liberal reformer, in sympathy with the revolution but not it's methods. This should be at the heart of understanding his character, but like his poetry the film has no time for it. Instead, Zhivago is boiled down into a romantic figure, nothing more. He has no inner life at all, a blank canvas rather than an enigma. 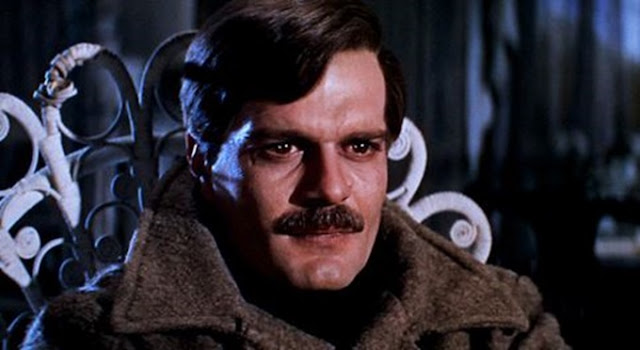 Suddenly those long lingering shots of Sharif’s puppy-dog eyes end up carrying no real meaning. They aren’t the windows to his soul, only a big watery hole with not much at the bottom. Sharif is awkwardly miscast – and lacks the dramatic chops O’Toole bought to Lawrence – but it’s not completely his fault. His character has had his depth removed. When we see him struggling at the front, trapped on a long train ride to Siberia or forced to work with partisans, he’s not a man who seems to be considering anything, but just buffeted by fortune, neither deep or thoughtful enough to reflect on the world around him. That’s not really Pasternak’s intention.

Instead, the film boils the novel down to his plot-basics and, in doing so, removes the heart of what got the book banned in the first place. Lean misunderstood the future of Soviet Russia so much, he even chose to end the film with a romantic rainbow at the foot of a waterfall. The horrors of the civil war and the revolution are largely there briefly: a gang of deserting soldiers unceremoniously frag their officers and Zhivago frequently stares sadly at villages burned out by Whites or Reds (or both). But the film is more of a romance where events (rather than politically and social inevitability) gets in the way of the lovers – like Gone with the Revolution.

By removing the more complex elements – and the poetic language of Pasternak – you instead have the rather soapy plotline (with its contrivances and coincidences) left over. Again, it’s Hamlet taking only the events and none of the intellect or language. (And Pasternak’s novel didn’t compare with Hamlet in the first place.) Both Zhivago and Lara are shot as soft-focus lovers, with Julie Christie styled like a perfectly made-up slice of 60s glamour. It’s a grand scale, but strangely empty romance, because both characters remain unexplored and unknowable – in the end it’s hard to care for them as much as we are meant to do. For all the epic scale, small moments – such as an aging couple sharing a cuddle late at night on a train floor – carry more impact. How did the director of Brief Encounter – a romance that speaks to the ages for its empathy – produce such an epic, but empty, posture filled romance as this? 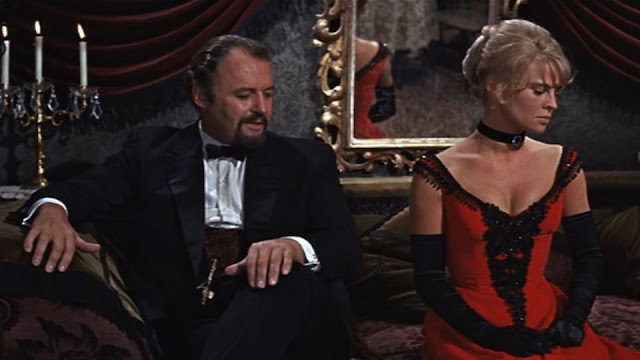 Julie Christie does fare better than Sharif – she’s a better actor, and her character has a bit more fire and depth to her. But she’s not in the picture enough, and Lean quietly undersells the terrible trauma of her eventual fate. Ironically, the smaller roles are on surer ground. Geraldine Chaplin is rather affecting as Zhivago’s wife, a dutiful and caring woman who her husband loves but is not besotted with. Ralph Richardson is witty and moving in a tailor-made role as her eccentric father. Tom Courtenay landed the films only acting Oscar nomination as the reserved and conflicted Pasha. Rod Steiger is very good as the mass of greed, selfishness and barely acknowledged shame as Komarovsky. Alec Guinness is bizarrely miscast as Sharif’s younger brother (!) but handles some of the film’s duller scenes well (Lean’s decision to have him never speak on screen except in the film’s framing device works very well).

There is a lot of good stuff in Zhivago, but this is a neutered and even slightly shallow film, that’s far more about selling a romance than it is telling a true adaptation of the themes of the novel. In Lawrence, Lean showed us multiple aspects of a conflicted personality to leave us in doubt about who he really was. In Zhivago, he just presents a rather empty person and seems unsure if he wants to use to ask who he is. The film concentrates on making the romance sweeping and easily digestible. What it doesn’t make us do is really care for them as people.