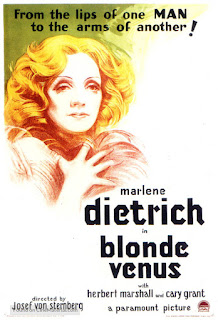 For their fourth outing together, von Sternberg and Dietrich made for the first time a film set in the modern era. Not that it mattered – von Sternberg would still turn the setting into his typical fever-dream of hyper-reality. It works as always though, because von Sternberg is a master of style and Dietrich is a true superstar. There might not be much more to it than that – and there isn’t really in this melodrama – but that’s still more than enough.

Ned Faraday (Herbert Marshall) is an American chemist (although he sounds more plummy than King George) suffering from radiation poisoning. Fortunately, there’s a cure (this was a simpler time, before we knew there wasn’t any dusting yourself off from a deadly dose of radium) but it will cost. Ned’s German wife Helen (Marlene Dietrich) has to take to the stage again to earn the money to pay for it – but finally finds the real money is in essentially prostituting herself to playboy businessman Nick Townsend (Cary Grant). When Ned finds out his life has been saved due to his wife becoming a kept woman he is furious – and she heads on the run with son Johnny (Dickie Moore) as she’s terrified of losing custody of him.

The Blonde Venus of the title is Helen herself, that being her stage name. Blonde Venus is frequently punctuated by prolonged musical performances by Dietrich, filmed with a flowingly smooth camera by von Sternberg, now firmly able to marry movement and dialogue in his films (in a way Morocco fails to do). The most bizarre of these is “Hot Voodoo” which features exotic African-American dances and Dietrich emerging from a huge gorilla suit wearing a blonde afro. This sort of stuff is so strange that it still works as entertainment, and it strangely fits with von Sternberg’s dreamy approach to story-telling where everything feels a few degrees off reality.

Blonde Venus riffs on this fable like atmosphere pretty openly. It starts with Helen telling a story of how Ned and her first met. This opening shows Helen and several German women skinny-dipping in a pool in the days after the First World War (oh, those pre-Code days!) when they are approached by a group of American GIs, led by the completely un-American sounding Ned. They flirt, and the entire meeting feels very much like a fairy tale – which is exactly how Johnny takes it. The film will end with revisiting this story, this time the son wanting to use it as a comforting romantic vision to escape to. It’s all part though of how Blonde Venus is very consciously framing itself as fairy tale, a group of people living in a heightened reality that’s just outside of logic.

Pretty fitting as the plot leads into an almost bizarre sequence of Helen and Johnny on the run – Ned wants paternity (since his wife is now a floozy) so Helen and Johnny had down South into a Southern States of America which are bizarrely so unspecific in their setting they could be anywhere and later a Texas that looks like it’s come straight out of the Chinese market-place of Shanghai Express. Throughout the journey, like a Princess on the run from a wicked stepmother, Helen is pursed by policeman looking to find Johnny for a reward. Like an old morality tale, she is tipped into destitution (eventually arrested for vagrancy) but then almost as suddenly decides to turn her life around – literally the next scene she is in Paris, the belle of the French night club scene. This is the sort of rapid logic of a dream, and about as likely as a fairy tale would be in real life.

Alongside this fascinating narrative dreaminess, the film also carries a proto-feminist message. It sympathetically sides with Helen, a woman who has no choice but to prostitute herself in an attempt to save her husband’s life – only to be roundly condemned for it by the old stick-in-the-mud the moment he returns. Blonde Venus hardly warms either to Nick Townsend – played by a very raw Cary Grant, still years away from creating his persona in The Awful Truth – a selfish playboy who seems uninterested in consequences. By contrast, Helen is a martyr who consistently puts other people first and as a reward is branded a harlot and a bad mother. You can’t win.

As Helen, Marlene Dietrich gives another fine performance. By this stage, she was highly experienced before the camera and knew exactly how to achieve an impact on the audience. As Helen she is continually sympathetic but also a bright, confident and determined woman with a deep love and loyalty for her family. Dietrich works extremely well with her two male stars – although she rather overshadows both of them – and has an excellent chemistry with the kid. She nails the song and dance moments and her slight air of other-worldly mysticism lends itself very well to the fairy-tale feel of much of the film.

Blonde Venus is of course crammed with beautiful images and transitions. There is a lovely opening transition from that flashback to Ned and Helen’s first meeting to the modern day, where Helen’s body thrashing through the water slowly turns into Johnny beating water in his bath with his feet. The other worldly beauty of Helen’s run from Ned is beautifully presented, and von Sternberg draws some very good performances from his leads. It’s a very slight story – a classic melodrama – but its told with an artful skill that makes it a very rewarding watch.