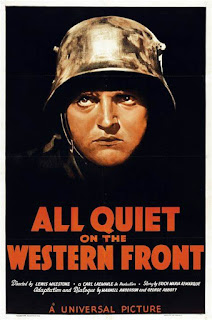 Franklin Roosevelt once said “War is young men dying and old men talking”. Perhaps no film shows that more truly than All Quiet on the Western Front. The first truly great film to win Best Picture at the Oscars, it’s a profoundly influential and unflinching look at the horrific cost of war. Specifically, it looks at how a younger generation buys into dreams of glory and destiny, only to arrive at the front lines and discover they’ve been sold a pup. A sense of glorious purpose collapses into death, mud and misery. War, it turns out, is hell.

All Quiet on the Western Front follows a company of German soldiers during the First World War, plucked from their college to lay down life and limb for the Kaiser. Their unofficial leader is Paul Baumer (Lew Ayres), an intelligent and thoughtful young man. They soon find the frontline is a world away from what they expected, and death moves through the boys like a flu. Over time Paul, with the mentorship of experienced soldier Stanislaud Katczinsky (Louis Wolheim), finds his naïve view of the world torn away with each bullet and failed attack.

In many ways it was brave to make such a large-scale Hollywood epic that placed the side America had actually fought against in the sympathetic role (on the other hand, much easier to look at the losing side and say “you’re fighting for a hopeless cause”). But that makes the film’s message even stronger: it doesn’t matter about sides, war claims young men regardless. The deaths come thick and fast on the Western front – and the gains are negligent. While the boys’ Professor (a pompous Arnold Lacy) sings a familiar hymn of glory and success by Christmas, life on the front line is actually continual terror. Mud, rats, debris and the constant chance the next step you take could be your last. Shelling is non-stop and every inch of the rickety, ramshackle trenches shakes with each explosion. Never mind going over the top, just being there shreds the nerves.

When the attacks come, the film is striking in its modernism and visual invention. Milestone frequently uses intriguing angles and long tracking shots to present an uninterrupted vision of hellish conflict. The film is full of crane shots, urgent camera movements and judicious cutting. The horrors are shown clearly – at one point a soldier literally explodes while cutting through barbed wire, his hands left clinging to the wire, the rest of his body gone. Milestone intercuts shots of machine guns firing an arc with the camera moving in a smooth tracking shot as men run towards it and collapse in death. The film is literally shredding its soldiers.

The debris filled, fox-hole spotted no-man’s land the film presents is hellish. It’s a literal minefield of death, with bodies charging backwards and forwards depending on the tide of battle, the camera moving alongside them. For hand-to-hand fighting in the trenches, Milestone shoots the action with a tracking crane shot above the trenches, which stretch like a jagged flesh wound in nature, overflowing with people trying desperately to kill each other. During one charge, Paul lands in a fox hole with a French soldier, who he mercilessly wounds with his bayonet – then spends a dreadful night watching him slowly die. There isn’t any glory here and attack and retreat are both equally pointless. All that really happens is the body count ticking slowly up.

Most of the company are dead well before the film hits the half-way point. After the first big attack, the company goes behind the lines for a meal. Their meal is almost denied them as it was made for a company twice the size of the one that actually reports. It’s a sign of the suffering and hardening to death, that the reaction of the survivors is joy at the unexpected double rations. Later Milestone follows the fate of a single pair of boots, in a beautifully edited sequence that constantly visually focuses on a pair of good boots, while their successive owners meet their deaths. 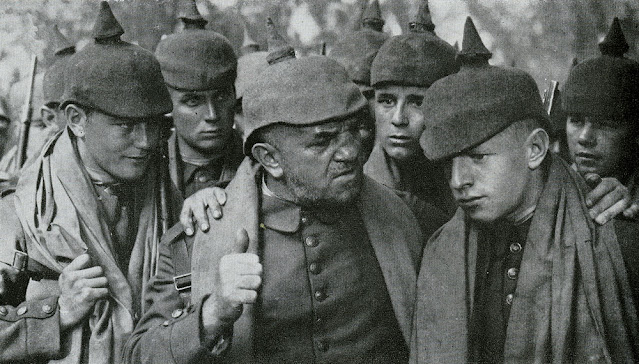 It’s all so different from how we started, with an Eisenstein-inspired series of cuts to cheering faces as the students sign up. The horseplay at the training camp – where they deal with an officious postman turned corporal Himmelstoss (a puffed up and preening John Wray), overly aware of his own rank and determined to rub the boys faces in it – in no way prepares them for what is to come. This is all too clear from their confused faces at the staging post, a chaos of mud, soldiers and shelling. No wonder no one at home understands what’s happening here – as Paul discovers on leave, when he is repeatedly shocked and disgusted by the casual triumphalism of old-armchair-Generals utterly ignorant of the realities at the front.

All Quiet on the Western Front is so beautifully shot and edited – you can see its influence on so many war films to come – that it’s a shame some of its dialogue and ‘acting’ scenes are now either a little too on-the-nose or overstay their welcome. There are some big themes handled in the dialogue: why are we fighting, what is the point of war, how do we live our lives when they could end at any time – but the dialogue is sometimes a little stilted. It’s also where the film reverts to something more stagey and theatrical and less cinematic and visual. It’s also a slightly overlong film – already a sign that Hollywood had a tendency to equate “important” with “long”. Most of the films’ points are well made by the first hour, and the second hour or so often repeats them.

However, those concerns are outweighed by how much there is admire. Lew Ayres is very good as the noble Paul – the film had such a profound effect on him he became a life-long pacifist, a conscientious objector in WW2 who served as a front-line medic. Louis Wolheim is superb as the rough-edged but decent and kind Kat, a senior soldier taking the new company members under his wing and teaching them nothing is more important than the next meal and no unnecessary risks.

All Quiet on the Western Front takes place in a naturalistic quiet, with no hint of music to interrupt the mood. It is an overwhelmingly powerful movie about the pointlessness and cruelty of war – and the lies that young men are told to fight it. When Paul returns to the homefront – and sees another class of boys being inspired to die for their country by his Professor – he denounces the whole thing (and is promptly branded a coward). War is a cycle that eats everyone it comes into contact with and has no logic behind it. Directed with verve and imaginative modernism by Milestone, this is a brilliant picture, one of the first sound masterpieces – and still one of the greatest war films ever made.