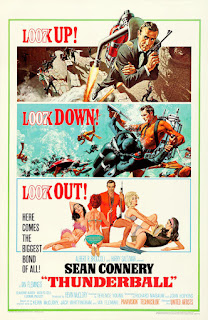 By 1965 no one bigger than James Bond – and the films had to reflect that. Thunderball had more money spent on it than all the previous Bond films put together. I suppose you can see that on the screen, but it doesn’t change the fact I’ve always found Thunderball one of the most meh of all Bond films. I always fail to get really engaged in it, and it’s stuffed with the sort of high-blown set-pieces where it feels the producers were so pleased at the possibility of doing something, they never stopped to think if there was an actual reason to do it.

Thunderball’s plot is the first example of what would become a pretty standard Bond trope: the swiping of nuclear missiles by criminals to hold the world to ransom (the principle would be repeated again in You Only Live Twice, Spy Who Loved Me and Moonraker). In this case it’s Spectre agent Emilio Largo (Adolfo Celi), who steals a British nuke-carrying jet and demands £100 million ransom to return it. All the 00 agents are scrambled, but of course James Bond (Sean Connery) has the only lead – helped by the fact he was staying at the same health farm where the hijacker was being surgically altered to replace the jet’s pilot. Bond heads to the Bahamas to follow his lead, the pilot’s sister Domino (Claudine Auger) – only to find out she’s Largo’s girl! Will Bond get those missiles in time and dodge sharks, heavies, red-headed femme fatales and deadly street parades?

Well of course. After all, Nobody Does It Better. Thunderball is big, expensive and has several high-octane fights. But it’s also strangely slow and ponderous, takes ages to get started and has the distinct whiff of everyone going through the motions. Compared to Goldfinger and From Russia with Love there is a noticeable lack of spark and wit. All the invention seems to have gone into some of the gadgets – look Bond has a jet pack! – and none into the script which presents a series of plug-and-play characters and a plot set-up that lacks any real sense of quirk.

It also doesn’t help that what feels like vast reams of the film are filmed underwater. The producers were obviously thrilled by the invention of underwater cameras, so were eager to throw as many action sequences down there as possible. Problem is an underwater action sequence is devoid of sound and, due to the breathing apparatus, it’s nearly impossible to see anyone’s face. All this makes for some slow-paced action sequences where it’s rather hard to tell what’s going on and who is on what side.

The score tries to compensate for this by hammering up the musical intensity. Everything in the film is trying desperately to tell you this is thrilling, but you eventually realise all you are really watching are a group of wet-suit clad stuntmen moving slowly around trying to hit each other. All this in a silence only broken by the occasional ‘dead’ character floating away in a burst of despairing oxygen bubbles. Nothing that happens underwater in Thunderball sticks in the mind, for all the money spend on it.

But that’s kind of the case for the whole film. It’s a huge spectacle, but also one of the hardest Bonds to recall. The opening sequence is overshadowed by Bond’s brief escape via jet pack (where does he get it from? How does he find the time to put it on when he’s being chased? Don’t ask) but is still a witty bit of fun as Bond works out that the widow at the Spectre agent’s funeral he’s observing, is in fact the widow in disguise. But the film from here takes a very long time to get going again, with Bond pottering around a health farm. The investigation into the missiles is cursory even by Bond standards, and the only sequence that really stands out is Bond limping bleeding through a street party and using the femme fatale as a human shield.

It’s all very competently, if rather lifelessly, directed and looks great. The sight of Largo’s boat splitting into two and one part zooming away is still impressive. Sharks get a healthy workout – sharks in Bond films are always about twenty seconds away from ripping people apart. But it’s all got an air of duty about it. Its a massive box-ticking exercise. It doesn’t even have a proper ending: Bond and Domino are literally air-lifted away without a word a few seconds after Largo’s death, as if the scriptwriters hit their page count and didn’t bother putting anything else down (future films would not miss up the chance for a bit of double entendre laced shagging while waiting for rescue).

Sean Connery looks like he might have had enough (this was his fourth Bond film in about four years), heading towards the autopilot that would become even more pronounced in You Only Live Twice. There are sparks of the old cheek and charm – and he does the final fight scene with a physical viciousness that I don’t think he displayed in any other film – but his mind is elsewhere. Not much comes from the rest of the cast, almost exclusively made up of European actors all-too-clearly dubbed. Largo is the most non-descript Bond villain on record, Domino a character so forgettable the scriptwriters don’t even remember to have Bond sleep with her. Luciana Paluzzi makes the best impression as the femme fatale Fiona Volpe (although she later claimed she was never taken seriously as an actress again).

Thunderball is reasonably entertaining, but it’s the most missable background playing of all the Bond films. There is nothing in here that really stands out, no moment that dominates the clip shows, nothing that you can put your finger on that makes it really unique. It’s not even terrible like some of the other films. It’s dominated by dull underwater sequences and has a cast of largely forgettable characters. It’s a film made to order but with no love.