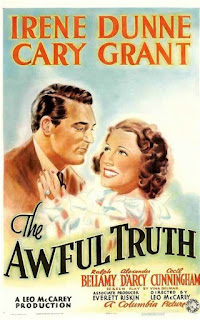 Lucy (Irene Dunne) and Johnny (Cary Grant) Warriner divorce because both of them are constitutionally incapable of being faithful. But yet, they also pretty much can’t stand the idea of the other being with anyone else. Can they face The Awful Truth that they are, in fact, perfect for each other? This is a feuding husband and wife who enjoy the horrified looks on the faces of other people as much as they enjoy seeing how far they can push each other.

When winning the Oscar for Best Director for this film, Leo McCarey believed he actually deserved it for his more serious melodrama about the struggles of the elderly, Make Way for Tomorrow. While Make Way for Tomorrow might well be a more serious work, and not the souffle of The Awful Truth, I’m pretty sure far fewer people over the past 80 odd years have found revisiting it such a delight as going back into The Awful Truth. Perhaps the eponymous truth for McCarey was that we are never the best judges of our own work.

The Awful Truth is possibly the best, funniest, remarriage comedy ever made. It was pulled together almost from nothing onset. Nominally an adaptation of a play by Arthur Richman, McCarey effectively dumped almost the entire plot and instead largely improvised the film and its plot on set as he went, throwing in jokes, plot developments and bits of business depending on what worked with the actors on the day. Producer Harry Cohn would arrive on set to find McCarey plinking on a piano, swopping stories and coming up with ideas for what they would shoot that day. From this the director would decide on the structure of the scene, the jokes and most of the dialogue. No wonder Cohn was pulling his hair out.

Sounds like chaos right? The stars certainly thought so. Grant was terrified. Prior to this a reliable Studio actor, used to being given the lines and standing where he was told. Finding out here that McCarey wanted something loose and improvisational, at first he was all at sea – even offering instead to buy himself out of the film. But McCarey saw something in him: in fact what he saw was “Cary Grant”. The Awful Truth is the moment the Grant we all know came to be: sophisticated, arch and a masterfully relaxed light comedian (rumour has it, at least partly based on McCarey himself). From hating the experience, Grant suddenly realised it was inspired. The same went for his co-stars: Dunne, Bellamy and the rest all excitedly contributed their own ideas and business into what became one of the greatest comedies of all time.

The Awful Truth is frequently laugh-out loud funny, a perfect combination of witty lines delivered with pin-point perfection. Many of the best lines fall to Irene Dunne’s Lucy, from denying an affair with her latest beau (“That’s right Armand. No one could ever accuse you of being a great lover. That is, I mean to say…”), to archly responding to Jerry’s “I know how I’d feel if I was sitting her with a girl and her husband walked in” with a “I’ll bet you do”. Grant though gets plenty of his own – “The car broke down? People stopped believe that one before cars started breaking down.” – and only he could make “I only just met her” a laugh-out loud moment. Nearly every scene has a perfect bon mot, brilliantly delivered.

McCarey’s direction also adds hugely to the comic effect. The Awful Truth is so smooth, polished and assured you can overlook how skilfully and brilliantly it’s been put together to accentuate the comic effect. From cuts that reinforce or set up gags, to characters entering and leaving at the edges of frames at the perfect moment for a laugh, the entire film is a masterclass in how to shoot and frame comic business. The film is a triumph of reaction shots: watch Grant, Dunne and Bellamy respond to the appalling singing of Jerry’s new girlfriend Dixie Bell (Lucy: “I guess it was easier for her to change her name than her whole family to change theirs”). Best of all a superb sequence where we hear Jerry and Armand fight off screen (with crashes aplenty) while Lucy attempts to maintain a banal ‘nothing to see here’ conversation with Daniel and his mother.

The entire film is a triumph of comic set-pieces, with Grant and Dunne sparking off each other like two whirligigs of static electricity. Both actors are absolutely sublime. Grant manages to make everything not only funny, but also effortlessly cool and his archness and confidence are hilarious. Dunne throws herself comedy with a full-blooded commitment and a total willingness to look silly. Like Grant, she also has the ability to tip the wink to the camera and flag up just how ridiculous many of these situations are. Ralph Bellamy, on paper, has the dullest role as the straight man but as well as being winningly naïve, he also has two show-stopping moments, most strikingly his hilariously enthusiastic dancing (made even funnier by Dunne’s increasingly uncomfortable efforts to keep up with him).

It’s all wrapped up in a plot light as air, perfect for the jokes to latch themselves onto. You’ll laugh almost from the first, but you’ll also care about these two dotty eccentrics who are clearly perfect for each other. With Grant creating his entire screen persona in front of your eyes and Dunne absolutely radiantly hilarious, The Awful Truth will carry on entertaining the masses for decades to come. Hopefully McCarey doesn’t regret that Oscar decision too much.