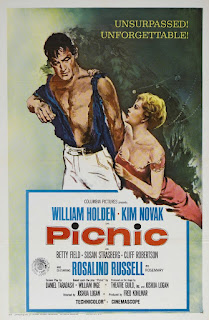 In a small Kansas town in the early 1950s, everything is sweet as apple pie. But under the surface, tensions bubble – and it only takes a stranger changing the status quo to make them explode. In William Inge’s Pulitzer-Prize-winning play – bought to the screen by original Broadway director Joshua Logan – that stranger is Hal Carter (William Holden), failed sportsman, actor and college drop-out, drifting into town looking for a new start from old friend Alan (Cliff Robertson). But Hal, an amiable screw-up, quickly puts himself in the middle of a love triangle between Alan and his girlfriend Madge (Kim Novak), the local beauty tired of being judged only by her looks.

All this eventually explodes into a series of furious confrontations where the true colours of various participants are revealed. In the 1950s Picnic looked like a criticism of the cosy conservatism of small-town America. But today, it actually feels more than a little nostalgic for the lost innocence of those times. Sure, some people in the town are less than sympathetic, or their lives have been crushed by the expectations of others. But generally, with its pastel colour palette and its generally fundamentally well meaning characters, it now feels a rather reassuring watch.

Like many films that pushed the envelope at the time, it also looks rather tame today. The film is strong on demonstrating the impact of the sexuality of a topless Holden on the women of the town – nearly all of whom go weak at the knees. But generally, the film’s sexual content now looks remarkably safe and gentle. A sense of powerful longing for something missing from their own lives does comes across strongly – Russell’s Mrs Sidney, worse for wear from drink, ends up feebly trying to pull up Holden’s trousers to look at his legs while dancing. But the sexual outbursts largely restrict themselves to that and a few passionate clinches.

Logan’s film throws in a few big visuals (such as the closing helicopter shot as a bus drives out of town) and clearly enjoys its location shooting, but remains stage-bound. Several scenes translate across exactly to backyard locations, the same sets in all but name that appeared on stage. It also struggles to fill the cinemascope screen, for all that James Wong Howe’s photography has a certain Autumnal beauty to it (you won’t see any vibrant greens, reds or yellows). In addition, many of the actors go for somewhere between naturalism and a mannered Broadway show-boating.

Perhaps the main issue is that film dwarves this slight and intimate story. Moments of intimacy that on stage you feel carry impact – heartfelt declarations and tortured confessions – don’t carry nearly so much on screen. In fact, the story ends up feeling rather slight and even predictable: the drifter has depths, but the town unfairly turns against him, the old-maid schoolteacher is deeply frustrated, the local beauty juggles depression, the good natured son of the local bigwig is a self-entitled bully. None of this really feels revelatory and, on screen, easily drifts by with little impact.

Logan’s stagy style also has a mixed impact on the acting with some going for a cinematic underplaying, and others inspired by a theatrical grandness to embrace the big moments. Leading the way in that camp is Rosalind Russell who gives a strong performance as the frustrated schoolteacher, but frequently allows herself to go a little too far in moments of emotional outburst. It’s particularly noticeable as she’s paired with Arthur O’Connell (reprising his Broadway role, and getting an Oscar nomination) who underplays with a quiet wit and honesty.

One of the film’s principle problems are with the two leads. William Holden gives a fine performance – fun-loving and kind but also cutting a rather sad and tragic figure behind the bonhomie – but is blatantly too old for the role. Hal is probably meant to be in his 20s – Holden was 37 and, with his craggy face, actually looks older. While it does add a level of Hal being increasingly irresponsible for his age, the part really means a charismatic youngster dripping sex appeal (think James Dean – Paul Newman was turned down for the part). Opposite him the inexperienced Kim Novak does, at times, give her line readings a striking genuineness but at others comes across as slightly wooden.

A stagy and slightly old-fashioned watch today, Picnic was nominated for several Oscars, but increasingly looks rather like a celebration rather than a gentle criticism of the small-town values it depicts.