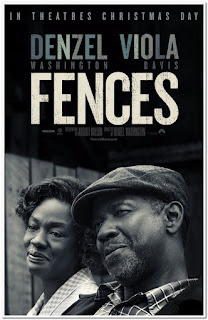 Pittsburgh in the 1950s. Troy Maxson (Denzel Washington) works as a garbage collector after his dreams of becoming a professional baseball player came up against the colour bar. Troy lives with his second wife Rose (Viola Davis). Troy had a troubled upbringing, turning to crime (and serving time in prison – lost time Rose quietly believes may have had more of an impact on his failed baseball career) and claims to have beaten Death in a wrestling match. Proud of his self-made status and certain, always, that he is right, Troy has difficult relations with his two sons Lyons (Russell Hornsby), a musician he believes is forever sponging money and Cory (Jovan Adepo), a teenager being scouted by an American Football team.

Fences follows a couple of years (with a coda that jumps forward five years) in the lives of these characters, and principally the impact that Troy’s mixture of pride, selfishness and bull-headed self-righteousness has on the family. It’s adapted from August Wilson’s award-winning stage-play, with a script prepared before his death by the playwright himself (earning him a posthumous Oscar nomination). Washington, Davis and most of the cast all starred in a hugely successful Broadway production of the play a few years before, and the film is a careful restaging of this production.

Perhaps a little too careful. If there is a problem with Fences, it is that it falls rather awkwardly between two stools. It’s neither particularly filmic – few of the scenes have been adjusted from the single-set locations of the play, and it’s filmed with an unobtrusive conventionality that makes it look and feel pretty similar to watching a National Theatre Live production – nor is it sufficiently theatrical. I can well imagine the power – and they are undeniably powerful – performances by the cast, principally Washington and Davis, would have blown you away live: but on screen, they can’t quite capture that same impact, in a film that feels slightly constrained by its theatricality.

Most of this comes from Washington’s determination that Wilson’s words would be the star, and all other factors in the production would service that. To that end, the film is a clear success – and you can’t argue Wilson doesn’t deserve a certain reverence, particularly as transfers of his plays to film had been almost non-existent before Fences. Wilson’s plays have rarely crossed the Atlantic, so watching this – a play I was not familiar with – I was enraptured by the working-class poetry of Wilson’s language, not to mention the empathy with which he explores his characters.

At the heart is Troy, a fascinatingly flawed human being. Played with huge charisma, which masks a deep bitterness, cynicism and self-pity, by Denzel Washington, Troy manages to be both admirable and destructive at the same time. You can’t not admire the way he has built his own life from scratch, or the “go-out-and-grab-it” balls that helps him become the first black garbage truck driver in Pittsburgh. He’s witty, warm-hearted and loves his family deeply. He’s also domineering, proud and so convinced his view is right that he sees no problem with cheating on his wife or forcing his children, often against their will, to conform with exactly his ideas of how they should live their lives.

So, he’ll tell his son that because Troy’s dreams of becoming a professional sportsman came to nothing, so will his: so there isn’t even any point trying. He loves his mentally handicapped brother Gabe (Mykelti Williamson), and rages at the Government that failed to support this wounded veteran – but he also takes Gabe’s disability payout and uses it to buy himself a house and charge Gabe rent for living in it. He’ll talk endlessly about putting duty and family first – but that fence of the title, which Rose asks constantly him to build, is a job he’ll put off time and time again in favour of holding court in his backyard. Troy’s built the family – but he’s also the main factor holding it back from moving forward any further. He’s a classic tragic figure.

Equally superb is Viola Davis as Rose, endlessly patient and caring, holding the entire family together and quietly and carefully cleaning up after Troy’s outbursts or bad temper. Davis won the Oscar, and Rose is a dream of a part a woman who closes her eyes to problems, believing she lives a perfect family life, until it is too late. When finally confronted with the selfishness of Troy’s actions, Davis’ emotional devastation – her resentment and fury at having benched her own dreams and desires to service Troy – is hugely moving, perfectly showcasing Davis’ skill to play deep emotions while simultaneously holding those emotions in.

These two actors are both extraordinary – and there are also fabulous performances from Henderson, Adepo, Williamson and Hornsby. What stops it from being an outstanding film though is that its more of a theatrical event pushed into a cinema. With the majority of the scenes taking place in Troy and Rose’s backyard, you can picture the single-set theatre production. The camera moves calmly from close-up to medium shot but does very little else. Very little has also been changed or reworked in the play – compare to Arthur Miller’s reworking of The Crucible or Peter Shaffer’s reimagining of Amadeus for the screen. It’s a film with a slightly worthy, mission quality to it. But as a showcase for the play – and the performances – it’s very fine.