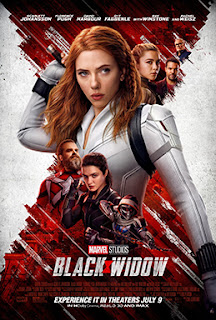 After the events of Captain America: Civil War, Natasha Romanoff (Scarlett Johansson) is on the run, when she receives a mysterious parcel from her “sister” – or rather the young girl she spent a few years with as a “family” of Russian agents undercover in America in the 1980s – Yelena Beloba (Florence Pugh). The parcel contains a drug that can be used to break the mind-control that nasty General Dreykov (Ray Winstone) has over his army of Widows: young girls like Natasha and Yelena, forced to become assassins in a torture chamber/training room called The Red Room. Natasha and Yelena team up to free the other assassins, but they will need the help of their “parents”, Russian super-soldier Shostakov (David Harbour) and genius inventor Melina (Rachel Weisz).

As the credits rolled on this formulaic slice of Marvel adventurism, I couldn’t for the life of me work out why it even existed in the first place. For a film centred around Scarlett Johansson’s Black Widow character, I expected to come out of this epic with some new understanding of her character. Not only do we not learn anything about her at all, we get no additional insight into what makes her tick, no deeper look into her character. We learn nothing about her that we don’t know already: and the film isn’t even smart or profound enough to reflect on the fact that we all know that the character died in the last film we saw her in. Does it exist solely so Marvel can say “Look we made a film about the only female Avenger, so shut up already!”

The film is stuck between being a greatest hits celebration of Johansson’s work elsewhere and providing as much focus as possible for Florence Pugh to take up the mantle in future films. In fact, the focus is so much on Pugh – who is terrific and gets all the best lines – that Johansson becomes a bit of a straight-man in her own damn movie. It’s Black Widow who has to say all the unhip, dull things (“We can’t steal that car!”) while her sister snipes, swears and plays devil-may-care with the consequences. For what should be her moment in the sun, Johansson gets rather short-changed here. But then perhaps she didn’t really care – it certainly never feels that she had anything she was determined to say or do here, other than cash a huge cheque.

The film is framed around a back story of villainy involving the nasty Dollshouse-style assassin school that both sisters were forced to attend, here revealed to still be in operation with a team of brainwashed female assassins. At the centre, like a creepy Charlie with brain-washed Angels, is General Dreykov, played by a barely-even-trying Ray Winstone (his accent is laughably atrocious). Dreykov is such a peripheral figure in the film that he never feels like either a threat or a dark manipulative force and his “plan” is such an after-thought, Winstone has to hurriedly state it for the first time in a final act monologue.

The film is supposed to be about misogyny, and how Dreykov has left a poisonous legacy of abuse of young women for his own ends. This includes forcing his daughter (a thankless mute role under a helmet for Olga Kurylenko) into a killer robber-suit as the sort of uber-assassin. Natasha is plagued with guilt about harming this character in the past – a guilt that would have way more impact on the viewer if we had seen even one bloody scene of them together to establish a relationship. How much more interesting, too, would the film have been if we had seen Kurylenko’s character as the new head of this abusive ring of spies, having taken up her father’s mantle and absorbing his poisonous world view. But no, such nuances are beyond this film.

There are a few moments of emotion and comedy gained from Natasha’s fake family – the parents who are not her parents, the sister who is not her sister. This odd group reunion makes for some laughs, but its noticeable that the main emotional impact is on Pugh’s younger, less settled character rather than the confident, assured Natasha. It’s another major flaw in the film: at the end of the day, I can’t imagine this had any real impact on the character at all. Does Natasha really change her view of herself at the end? No: she talks the talk about having “a new family” but her level of connection with them (certainly with her parents) doesn’t seem to go much beyond patient affection. Again, the real emotional impact is on Pugh’s character who has finally found something to base her life on: this would have worked so much better as an origins story.

Instead, this seems to exist solely to answer a trivia question I’m not sure anyone was asking: “What did Black Widow do in between Captain America: Civil War and Avengers: Infinity War?” If your life really was lacking without the answer to that, this is the film for you. Otherwise, there is little at all to make any of this stand out from any of the other 20+ Marvel films. Its action scenes are cookie-cutter (naturally everywhere Natasha goes, the place is destroyed), the emotional beats are completely unrevealing, the baddie so forgettable you might even miss it when he dies, and we get a few actors (Harbour and Weisz) coasting on a couple of decent lines and bit of comic business. Apart from anything involving Florence Pugh, this film is totally and utterly forgettable.