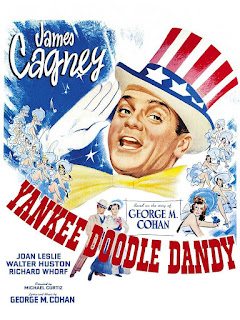 To many James Cagney was the definitive gangster. But Cagney wanted to be known as more than just another heavy: at heart he was a song-and-dance man. He got few chances to show it, so when the right film came along, doggone it he didn’t plan to leave anything in the dressing room. Cagney dominates George M Cohan biopic Yankee Doodle Dandy (at times its almost a one-man show with guests). He’s in almost every scene, doing his twist on Cohan’s stiff-legged dancing style with such energy and enthusiasm it leaves you quite exhausted watching it (Cagney sprained his ankle twice making it). It was a massive hit and won Cagney a much-deserved Oscar.

George M Cohan came from a family vaudeville troupe and became “the man who owned Broadway”. An accomplished performer, he was also a prolific writer (banging out more than 50 shows and 300 songs, including nation-defining tunes like Over There, The Yankee Doodle Boy and You’re a Grand Old Flag). The film uses his awarding of the Congressional Gold Medal from President Franklin D Roosevelt (Cohan arrives at the White House fresh from playing an all-singing, all-dancing version of the wheelchair-confined President in I’d Rather Be Right) as a framing device. Naturally, the President wants to know all about this Broadway legend’s life. Cue Cohan settling back to tell him his entire life story: from birth to childhood stardom, knock-backs and a string of successes.

It’s odd to think Cagney wasn’t keen at first. A leading union man – one of the founder members of the Screen Actor’s Guild – Cagney was not an admirer of Cohan, who had taken a strong stand against the 1919 actor’s union strike. What changed Cagney’s mind was accusations of communism from the House of Un-American Activities in 1940: he was cleared but his producer-brother William told him he needed “to make the goddamndest patriotic picture that’s ever been made.” They certainly succeeded with Yankee Doodle Dandy, such an all-singing, all-dancing celebration of the American way it must surely be Sam the Eagle’s favourite film.

Yankee Doodle Dandy is nothing more-or-less than a grand slice of entertainment. It’s very much cut from the same cloth as The Great Ziegfeld, another cradle-to-grave rundown of the life of a Broadway mover-and-shaker. Like that film, Cohan’s rough edges are comprehensively shaved off: his hostility to the actor’s union goes unmentioned as does his divorce and remarriage (instead his two wives are amalgamated into a new fictional wife, conveniently called Mary so that his song Mary’s a Grand Old Name can be named after her). Several events are telescoped or shifted to a new date for dramatic impact. Cohan emerges thoroughly charming (if proud), decent and honest all-round entertainer, overflowing with bonhomie.

Narratively the film does nothing Hollywood hadn’t done before. The big difference here to The Great Ziegfeld is that Curtiz keeps the story moving with real pace and a certain flair (it’s a solid two hours, and never outstays its welcome) and the musical numbers are dynamic and entertaining. A great deal of that is due to Cagney, outstanding in a part that demands an overabundance of personality. Cagney’s dancing and singing doesn’t have the grace of Fred Astaire (the original choice), but it has a gloriously entertaining and breath-taking energy. Cagney studied Cohan’s stiff-legged-marionette dancing style, and used his physical exuberance to bring to life his numerous dance routines with a spectacular stand-and-applaud skill and energy. (Curtiz uses a highly mobile camera to film most of these in single shots, to really capture the skill and energy of Cagney). His singing also follows the Cohan style – the sort of half-singing, half recital style Rex Harrison would later make his own. His impersonation is uncanny and performance superb.

Cagney is gloriously entertaining and makes every single one of his numerous songs thrum with glee. It’s a real reminder of what a modern performer Cagney was: he’s fast-paced, lacks any sense of staginess and has a real emotional honesty. His comic moments are very funny: in Cohan’s first meeting with Mary, still in old-man make-up (fresh from playing father to his own mother on stage), Cagney lets a little moment of glee move across his face as he realises Mary thinks he really is an old-man in his 70s – a confusion he plays up to, before launching into an impromptu tap dance routine. When tragedy strikes he is just as moving: his heart-broken repeat of his mantra “My mother thanks you. My father thanks you. My sister thanks you. And I thank you” at his father’s death-bed not only moves the audience, it also made the stony Curtiz weep on set.

No wonder, when a dying Cohan watched the film, he said “My God, what an act to follow!” Cagney’s performance, with its playful energy, encouraged a greater spontaneity in Curtiz’s disciplined directorial style. The famous sequence, where Cagney walks down the steps inside the White House before bursting into a joyful bout of tap-dancing was improvised on the spot (and a glorious summary of the playful joy of the movie it is). Curtiz uses montage very effectively at several points (a sequence of early knock-backs for Cohan is a wonderful collection of shots of signs, producer refusals and walking feet). He often uses high and low angles to imaginatively shoot the action, and the fluid camera for the musical numbers finds a neat middle ground between theatrical performance and cinema.

Of course, it is damned patriotic. The film recreates several of Cohan’s most stirring numbers in all their pomp. The explosion of Americana (Washington! Lincoln! Teddy Roosevelt!) that is You’re a Grand Old Flag (with hundreds of Stars and Stripes). The cheek and charm of Yankee Doodle Boy. The rousing marvel of Over There. The film plays up Cohan’s determination to do his bit in the First World War – turned down for service as too old, he carries out a full tap-dance routine to show he’s as limber as the next man. But it also has time for finding a way of staging creativity: there is a marvellous little sequence – beautifully shot by James Wong Howe – of Cohan finding the tune for Over There, tinkling experimentally with a piano on an empty stage.

The narrative of the play doesn’t reinvent the wheel, but it delivers a traditional structure with plenty of energy and some good scenes. (I enjoyed Cohan’s mother, struggling to find something nice to say about one of Cohan’s rare-flops, a music-free melodrama, left weakly praising the set). Though Cagney dominates the film, Walter Huston is very fine as his supportive and experienced dad and Joan Leslie charming as his loyal wife Mary (so supportive she’s happy to gift her song to stage star Fay Templeton, because the show needs her more). The balance between standard biopic scenes and musical numbers is very nicely handled.

Yankee Doodle Dandy offers up a familiar package, but one of the most professionally assembled and enjoyable of its type ever made. With Cagney in joyful, dominant form, you’d genuinely be quite happy just sitting and watching him go through as many vaudeville acts as he likes. Shot with flair by Curtiz, Yankee Doodle Dandy is catchy and highly entertaining.