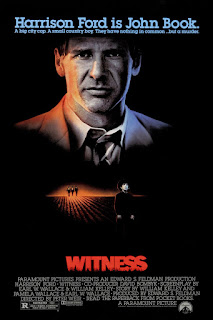 The old world meets the new, when a mother and son from an Amish community find themselves travelling through Philadelphia and the son is the only witness to a murder at the train station. The mother, Rachel (Kelly McGillis) wants to help, but is worried about her son Samuel’s (Lukas Haas) safety and is desperate to return home – after all these ‘English’ problems aren’t theirs. However, Detective John Book’s (Harrison Ford) investigation reveals the murder to be the work of dirty cops in his own department – and, after an attempt on his life, he has no choice but to flee back to Amish community with Rachel and son, hiding until he can find a way to set things right.

Directed by Peter Weir with a real professional smoothness, Witness is a triumph of atmosphere and mood, with an intriguing thriller at the heart of it. Weir brings a real understanding and respect for different ways of life, embracing the differences in the Amish way of life but also making some striking parallels between it and our modern world. It’s that emotional maturity and sensitivity that makes the film work: and the most impactful factor is the heartfelt, largely unspoken romance between Book and Rachel. Weir keeps this subtle, gentle and built on suppressed feelings and wordless moments that trusts the audience to understand their bond and their knowledge that their different worlds mean they can probably never be together.

Weir directs these moments with a real romantic simplicity, drawing possibly the most heartfelt, almost boyish, performance he’s ever given from Harrison Ford. Oscar-nominated (his only nomination), Witness is a reminder of how well Ford does both moral outrage and pained suffering. His fury at his corrupt colleagues betraying their badge is as visceral as his sense of fear when he’s chased (first in a car park, then later around an Amish farm) by Danny Glover’s heavy – we always feel worried about Ford’s safety, while also sure he can look after himself. He also works wonderfully with Lukas Haas, Weir focusing on his under-valued fatherly qualities as an actor.

Ford brilliantly combines his decency and world-weary sadness (few actors manage to look more outraged but also resigned when confronted with betrayal and villainy – and is there a more decent, homespun name than John Book?) but Witness taps into his vulnerability more than almost any other film. That’s not just physical vulnerability – he spends a large portion of the film recovering from a gunshot and looks genuinely in fear of his life in the final confrontation – but also emotionally vulnerable.

In a luscious scene he and Rachel (an equally superb performance from Kelly McGillis) dance in a barn to What a Wonderful World by Sam Cooke. As the two shyly and slightly hesitantly exchange looks, both actors allow their characters to hang on the edge of making a clear romantic gesture, but always backing away with laughs and grins. Ford has never seemed more playful, joyfully singing along while McGillis’ emotional frankness and honesty leads makes the scene beautifully romantic, with two people nervous about admitting their growing feelings for each other.

This is just one of several romantic touches that really carry impact. From the moment they arrive in the Amish village, they find themselves drawn to each other. Maybe it’s the charmingly awkward way Book wears the Amish clothes that don’t fit him. Perhaps is the delighted smile and the realisation of her own loneliness in Rachel . But the feelings are unspoken but clear. Both of them are tentative about romance. Book is passionate about justice but surprisingly shy personally (as is all too clear from his bashful talk with his sister earlier). Rachel is committed to her religion, but also yearns for something emotionally beyond what that community can give her (certainly she's unthrilled by the expectation that she will marry Alexander Gudunov's Amish farmer, who courts her with a pleasant but romance free dutifulness). Interestingly she is the one more forward in what she wants than Book. For all the film is a gripping thriller, this romantic story is its heart and what gives the film its impact.

The film also works because Weir treats the Amish life so matter-of-factly. The opening moments of the scene, in its simple rural setting and accompanying choral-inspired score could be set hundreds of years ago. It’s actually quite jarring when we find ourselves in busy Philadelphia: but Weir never suggests either way of life is superior to the other. Both are communities with their own rules, virtues and flaws. The Amish are peaceful, but just as capable of prejudice as anyone else. But they are free of the cruelty and violence of the modern world.

A large chunk of the film follows Book’s fish-out-of-water experiences with the Amish, and his growing regard for them reflects the film’s own feelings. He finds there’s a strange peace in the community – and we can see why after we’ve seen the hard-bitten streets Book works. Ford’s real-life carpentry skills have never been used better on film, as Book helps raise a barn (a lovely moment of communal accomplishment). But while the peace is refreshing, he can only change so much. Confronting abusive townspeople (“It’s not our way”/”It’s my way”), Book strikes back. The film’s stance on Book’s smacking down of these abusive street kids is an insight into its maturity: it’s a brief moment of triumph, but is soured instantly by the horror of his hosts – and leads directly into blowing Book’s cover.

But it works because it reflects how we are feeling. Having been led to invest so heavily in a way of life it’s easy to joke about, we feel the same as Book does: those bullies need taking down a peg or two. It fits with Book’s character as well – the idea of corrupt, bullying cops is as repugnant to him as drunken oaths mocking those who choose not to defend themselves.

Weir’s film also successfully creates plenty of thriller beats. Little Samuel’s witnessing of a murder in a train station toilet has a seedy immediacy and sense of danger that really makes you fear for the kid’s safety (and admire his life-saving ingenuity). There’s also rather nicely a simplicity to the film – it’s no whodunnit, we more or less have every question answered in the first half hour. Instead, the suspense comes from if Book can live long enough to hand out justice and how he can possibly manage that from an Amish village.

But Witness’s heart is the relationship between Book and Rachael, wonderfully bought to life by Ford and McGillis. Few thrillers would dare to be as soft and sensitive as this film – or have such restraint. It’s tinged throughout by the careful creation of two worlds that mutually co-exist, but never together. It’s open about the virtues and flaws of Amish life, but offers no judgement on either them or their religion, only acceptance of difference. Witness is a thriller with a heart, combining excitement with moments of heart-rending romance. Professional Hollywood working at its best.