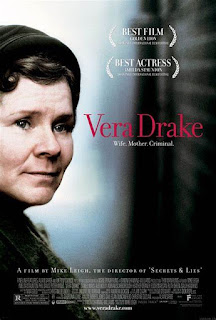 If you passed her on the street, you’d be sure to say hello and she’d be sure to ask after your family – and really mean it. She has a kind word for everyone and never thinks about herself. And, as far as the law is concerned, she’s a multiple murderer. Vera Drake mixes warmth and goodness with anger at social injustice and is stuffed with perfectly observed detail and marvellous acting. It might just be Mike Leigh’s masterpiece. Certainly, few other of his films carry such an emotional wallop.

In London in 1950, Vera Drake (Imelda Staunton) spends her life helping those around her and is a devoted wife and mother. But what her husband Stan (Phil Davis) and children Sid (Daniel Mays) and Ethel (Alex Kelly) don’t know is that for decades she has been “helping young girls out” who find themselves unwillingly in the family way. All Vera wants to do is help – but with abortion illegal, her actions are a ticking timebomb, which explodes when Vera is arrested.

Vera Drake is a film about “the family way” – in every sense. Leigh’s unique film-making technique is familiar now: long weeks of research and intensive, improvisational rehearsals help the actors to create fully-fleshed characters who they know so well, they can predict their reactions in any circumstances. During rehearsals, none of the actors in the family knew Staunton was playing an abortionist until the actors playing the police knocked on the door mid-rehearsal – and even Staunton was completely unaware she was to be arrested. The genuine shock the actors felt feeds this intensely powerful scene – and every moment that follows.

In perhaps no other film has Leigh’s technique been more successful: every single character feels completely and utterly real. You could look in any direction and find a character with such a rich hinterland you want to know their stories. Just as intriguing films could be formed around the lives of the young women Vera helps out – Sinead Matthews ‘very young woman’ (and the boyfriend who waits outside), Tilly Vosburgh as a mother of seven with a sick husband, Rosie Cavaliero as a nervous married woman or Vinette Robinson’s scared Jamaican girl – as has been about Vera.

These women have fallen through the cracks – unable to support a family, but deprived any chance of making choices about themselves and bodies. There is a clear social gap – Sally Hawkins gives a sensitive, gentle performance as an upper-class woman, raped by her boyfriend, who obtains an abortion through psychiatric loopholes available only to the rich. No fault of hers – you can imagine she’d be horrified at how others suffer – but for the poor, their only option is Vera. It’s a huge flaw in the system – and removing Vera won’t solve the ‘problem’. It only means women will turn with more desperation to the sort of uncaring sleazy abortionists Denholm Elliott played in Alfie.

The film works because of its tenderness and the raw emotion of the performances. Leigh’s camera is a largely stationary and observatory, but that immerses us in the domestic charm of the first half as much as it does the horrifying coldness of the legal system in the second half. The Drake family home is small and cramped, reflecting their poverty, but also because it feels stuffed with love. Their children – the extremely shy Ethel and her outgoing son Sid – both reflect their intensely loving home, and her husband Stan is full of kindness, generosity and decency.

Leigh carefully demonstrates the warmth of this family. There’s a tear-inducingly sweet romance between Eddie Marsan’s Reg (a beacon of human decency) and the shy Ethel. Stan’s brother Frank (Adrian Scarborough, marvellous) and middle-class wife Joyce (Heather Craney, wonderfully torn in her feelings) struggle to conceive a child. The family laugh and joke together, every day ending in smiles and expressions of love. It’s beautifully immersing and deeply moving – and makes the wait for this world to shatter even more dreadful.

As Vera, Imelda Staunton gives an astonishing performance. A quiet, polite, open-hearted lady whose greatest pleasure is other people’s happiness. Leigh’s film follows her acts of caring around the community – cleaning neighbours houses, looking after her ill mother, inviting lonely newcomer Reg to dinner – showing she applies the same heart-felt but unshowy care to those, as she does to her abortions. It’s twenty minutes before we see one of these, and what’s striking is the well-practised calmness Vera goes about this work, carefully repeating the same reassuring instructions. She never asks for anything (the posh doctor treating Sally Hawkins’ character takes £100). Lily, who puts her in touch with those in need, has no qualms charging £2 without Vera’s knowledge.

Then the arrest comes. This sequence – and the rest that follows – is frankly extraordinary. Staunton’s face when she sees police is a heart-breaking thing of wonder – a horrified realisation that what she has dreaded for decades has finally happened and the realisation that the world as she knew it is over. Throughout she is astoundingly fragile. Barely able to speak, mute with shock – and horrified to hear one of her girls nearly died (it’s never revealed what went wrong). Her first thought is the girls health and how this will ruin her family’s celebration of Ethel’s engagement. So warm and joyful has the first half of the film been, we feel the shocking coldness as the law goes about – albeit with a regret, beautifully underplayed by Peter Wight’s sympathetic detective and Helen Coker’s gentle WPC – the black-and-white business of cataloguing wrongs. 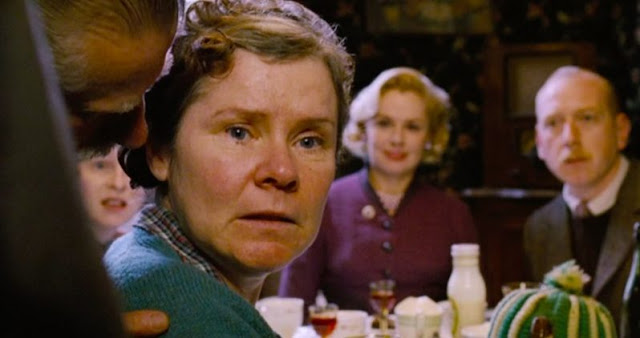 Staunton is extraordinary: she shrinks and diminish, terrified and mortified. The reactions of her family – confused then stunned and in some cases appalled – feel immensely true: some jump forward in support, others in anger. Phil Davis’ deeply moving performance sees Stan suppress his anger under love. Mays’ Sid rages, Heather Craney’s Joyce is resentful, Scarborough’s Frank is a pillar of support, Alex Kelly’s Ethel quietly holds her mother and will not her go. The emotion of this is so affecting as it feels so real: when Reg quietly shows his support and later gently says the disastrous post-arrest Christmas is the finest he has ever had, you’ll feel tears spring to your eyes.

The relentless march of the law is chronicled perfectly by Leigh. This is a director at the top of his game, creating a low-key film that switches on a sixpence from warmth and familial love to shattering emotional impact. Staunton’s performance is breathtakingly brilliant, avoiding all histrionics and will break your heart. The entire cast is astounding. The research and filming is exquisite. The film will quietly devastate you, but also remind you that nothing is more reassuring than the fundamental goodness of people. A beautiful, moving, masterpiece of a film.