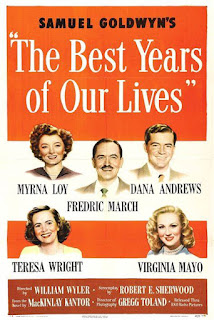 Three men return from the Second World War. They’ve changed, but everything around them seems the same. How do they even begin to adjust when no one really understands what they’ve been through? The Best Years of Our Lives was a sensation when it was released, speaking to a whole country reeling from the shock of war. Many films focus on the gruelling experience of war, but few take on the struggle to find a place for veterans and help them reintegrate into normal life.

Our three veterans all meet at the airport, trying to home to the same small (fictional) city in the Midwest. Normally they would probably have never met: but war has given them a shared bond they will find hard to replicate back home. Al Stephenson (Fredric March) is a banker, who has developed something of a drinking problem to the surprise of his wife Milly (Myrna). Fred Derry (Dana Andrews) was a café worker who became an Air Force Captain – but finds that doesn’t interest employers back home. He also now has nothing in common with the flighty, flirty wife Marie (Virginia Mayo) he married before shipping out – and far more in common with Al’s thoughtful daughter Peggy (Teresa Wright). Homer Parish (Harold Russell) lost both his hands, replaced with mechanical hooks. Can he overcome the adjustments – and allow himself to be loved by Wilma (Cathy O’Donnell)?

What The Best Years of Our Lives explores brilliantly is how quick we are to praise heroes, but how slow we can be to offer them practical help and support. These problems aren’t just restricted to an unlucky one or two – the film goes out of its way to demonstrate the problem is universal. Our three leads are from different services, and radically different walks of life: an important businessman who served as a sergeant, a wash-out who found a purpose in the air force and an athletic sailor who returns without his hands. Rich or poor, it’s tough to find your place whoever you are.

Wyler shoots all this with a documentary realism, with extensive use of deep focus photography. It helps make this a frequently moving film. It sometimes feels like Wyler just captured real events. Flying home our heroes see “people playing golf like nothing happened”. They are all so nervous going home that both Al and Homer both suggest going for a drink rather than leave the cab they are sharing. Everyday problems about going to the office or looking for a job seem more affecting because we know they’ve come back from the war and don’t deserve knock-backs like this.

The heart of this film is Fred’s struggles to find some sort of purpose on civvie street. War offered more opportunities to him more than anyone else. He is a nobody who became a respected somebody. Now he can’t get a job in a department store. As a potential employer tells him, his CV is stuffed with irrelevant experience and his years out of the job market mean he’s fallen behind the rest. This is how a man with a chest full of medals, winds up serving ice cream and busting a gut trying to flog perfume to housewives who let their children run wild around his stand. 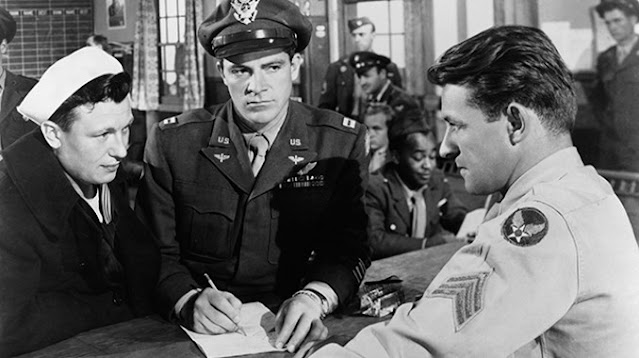 Dana Andrews is the heart of this film, giving a marvellous performance of great depth and sadness. Haunted by nightmares, Fred’s optimism drips away the longer he fails to find proper work. Perhaps most heart-breakingly of all, he increasingly makes himself the target of his dry wit. By the time he has surrounded to the indignity of taking back his old soda jerk job (and reporting to the spotty kid who used to be his assistant), Fred is disparagingly belittling his own wartime accomplishments.

If someone as matinee idol handsome, with a wonderful war record, as Fred can’t get ahead, what chance does anyone have? Fred’s wife (Virginia Mayo, marvellously smackable as this shallow girl) isn’t even interested in him, only the idea of him – begging him to wear his uniform (medals and all) for as long as possible so she can show him off like a new handbag. Fred is knocked back so many times, he comes to believe he deserves it. In a beautiful scene, late in the film, he walks through a field covered in old air force bombers. It’s a striking visual metaphor – one Fred is all too aware of – that he’s as much on the scrap heap as them.

The Best Years of Our Lives shows time and again how quick we are to forget. Al is hauled over the coals for offering a loan to a collateral-free GI who wants to start a farm. But Al feels a loyalty to men like this – and he recognises, unlike his superiors, there are qualities you just won’t find in a bank account. Homer is confronted at Fred’s workplace by an arrogant anti-Commie, who suggests the entire war was a waste of time, spent fighting the wrong foes. Calling Homer “a sucker” for losing his hands in the wrong war leads to a fight – and Fred losing his job for punching the guy out. Where is the sense of debt to these people?

Homer not only has to deal with disability – but also the metallic claws which get him all the wrong attention. The army trained him how to use the claws – but as Al observes, watching Homer’s awkward homecoming “couldn’t train him to put his arms round his girl”. They can solve the practical problem, but there is no support for actually coming to terms with the emotional impact. 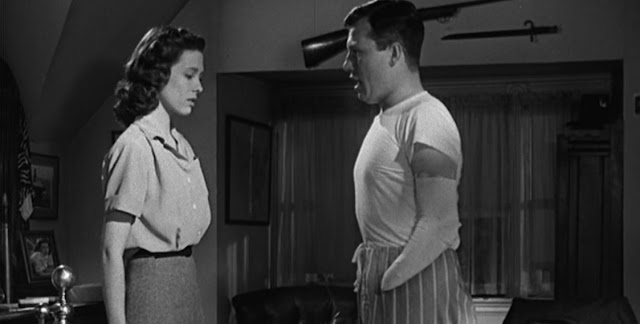 Homer is played by real-life veteran paraplegic (and non-actor) Harold Russell, in a poignantly sincere, unstudied performance. It becomes even more heart-breaking, as his torment clearly rooted in Russell’s own experiences. When Homer demonstrates to Wilma how vulnerable he is without his hands –  if a door shuts, he’s trapped in a room, he can’t dress himself– it’s almost unbearably sad (O’Donnell is equally good in this scene). Russell’s simple, matter-of-factness is more moving than any histrionics.

The only plot that doesn’t get fully explored is Al’s implied drinking problem. He gets pissed the first night home (and his wife comments several times on his growing reliance). Everything to Al feels a little different – his kids are older, his bankwork seems stuffier. Today the film would dive more into Al’s probable survivor guilt. But Al makes a stand when others won’t to help his veterans – and March has a superb, low-key speech at a banquet in his honour where he vows to invest small loans into returning GIs. The film also gently probes – and in some ways leaves open – the ongoing problems he and Milly (warmly played by Myrna Loy) have had in their marriage, problems which Al’s absence and drinking have not helped solve.

Wyler pulls these threads together in a restrained style that largely avoids melodrama (though Hugo Freidhofer’s score is frequently overblown – Wyler apparently hated it). Instead, dilemmas are grounded in reality. Al might like Fred, but the last thing he wants is for Fred to get his daughter Peggy (Teresa Wright in a gentle, touching performance) caught up in a divorce. In a perfect example of Wyler’s restrained, documentary style, Al and Fred have a quiet man-to-man discussion, before Fred calls Peggy to see he can’t see her anymore. He does this in the back corner of the frame while the foreground shows Al listening to Homer and his uncle play the piano. It’s a perfect example of the way Wyler uses deep focus to give the film a fly-on-the-wall quality.

There is something extraordinarily modern about The Best Years of Our Lives. It feels calm and un-histrionic – and of course many veterans still struggle today. The camera feels observational and unobtrusive and the characters respond to situations in a very natural way. It’s also helped by the wonderfully natural acting. It all comes together in a film that is important without feeling like it’s trying to be important. An observant, sensitive exploration of the experience of veterans (made by a veteran), that never feels false and looks at our world with affection but realism.