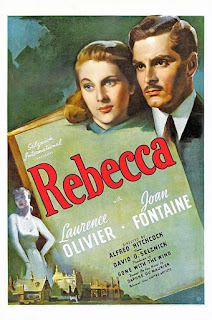 It’s impossible to know what people are really thinking isn’t it? Rebecca is a film all about secrets and misconceptions, the biggest enigma of them all being that title character, the deceased wife casting a ghostly shadow over every scene. Adapted from Daphne du Maurier’s best-selling novel, Rebecca was Hitchcock’s first American picture and a masterclass in atmosphere with a vulnerable and deeply sympathetic lead, packaged into a wonderfully entertaining film combining the best of producer David O. Selznick’s sense for literary translation with Hitchcock’s filmic virtuosity.

On the French Riviera, a naïve young woman (Joan Fontaine), working as a paid companion for widower Mrs Van Hopper (Florence Bates), meets and becomes engaged to the aristocratic Maxim de Winter (Laurence Olivier). Maxim is a widower, whose previous wife Rebecca drowned. Becoming the second Mrs de Winter, our heroine quickly finds herself out of her depth in Manderley, Maxim’s colossal country home. Every where she goes there are memories of Rebecca, her husband still seems to be in love with his first wife and the housekeeper Mrs Danvers (Judith Anderson), still fanatically loyal to Rebecca, takes every opportunity to subtly remind the second Mrs de Winter of her own inadequacy. But is there a darker mystery behind the death of Rebecca?

Hitchcock’s Oscar-winning film (his only one, although he didn’t get the Director award) is a gothic delight. The action takes place in a mist-filled Cornwall, in a house where every nook and cranny has a dark secret. From its opening sequence, with the camera tracking through a fogbound forest before emerging in sight of a the intimidatingly grand Manderley, this is a film swimming in atmosphere and a dread of dark, psychological secrets, wrapped up in a dynamic melodrama.

At its heart is the vulnerable second Mrs de Winter – so timid we never even learn her name – beautifully embodied by Joan Fontaine. Nervous, awkward and shy, her hands often clasped together and shoulders (under a parade of unglamourous cardigans) tense, she rarely (if ever) looks comfortable. Fontaine’s wonderfully judged performance makes her bashful and deferential but also kind and guileless. Her polite eagerness to do the right thing and help people makes us warm to her instantly. And it’s impossible not to empathise with this gentle middle-class girl, parachuted into being the grand mistress of a huge house. Everyone seems to find her wanting – even Maxim’s decent sister (a droll performance by Gladys Cooper) good naturedly criticises everything from her lack of hobbies to poor dress sense.

That house would make anyone feel inadequate. Hitchcock frequently shoots Fontaine dwarfed by Manderley’s huge interiors, with its walls which seem to stretch on forever. She looks like a small frightened rabbit, as hopelessly oppressed by the building as she is bewildered by the procedures involved in running a house like this. Plus, there are all those reminders of Rebecca – everything seems to carry a monograph and not an item in the house seems to be without her personal touch. In many ways Rebecca is a ghost story without a ghost, where Rebecca’s presence (or lack of it) dominates the entire world of the film.

And our heroine (so uncertain of who she is, she tells a phone caller “I’m sorry Mrs de Winter has been dead for some time” before she suddenly remembers that is now her) won’t be allowed to escape that legacy. Not least because Mrs Danvers is there to remind her. In a superbly cold, calculating and chilling performance of barely repressed obsessiveness, Judith Anderson is outstanding as this housekeeper from your nightmares. Mrs Danvers is determined to turn Manderley into a mausoleum to her lost mistress – and ideally the new Mrs de Winter into a human sacrifice. Hitchcock manages to suggest more than a hint of sexual obsession into Mrs Danvers – she fondles with awe Rebecca’s negligee, drapes herself in Rebecca’s fur coats and remembers her with a breathless intensity. It’s an obsession that makes her subtly unbalanced and deeply dangerous. 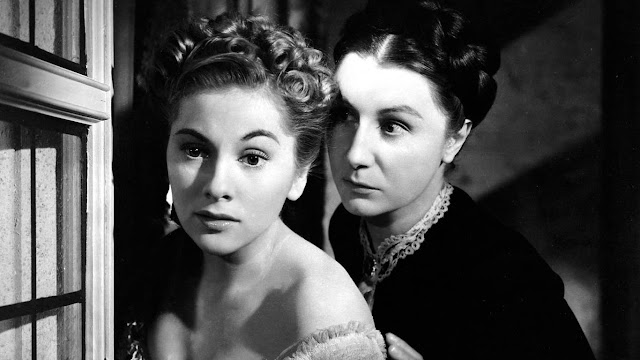 Rebecca contains many of the themes that would run through Hitchcock’s work. Obsession obviously has a dark hold over Manderley, not least over Maxim who has the air of a man capable of violence. Unspoken, unknown crimes haunt over Manderley. The death of Rebecca is constantly bought back to us, not least with the film’s continual visual reference to crashing waves. The second Mrs de Winter feels isolated and watched at every turn, a stranger (and potential victim) in her own home. Several shots hammer home giddy, vertigo-inducing heights – from Maxim’s introduction on the cliffs, to the long drop from the heights of Manderley which Mrs Danvers urges a distraught Mrs de Winter to consider taking.

But what’s superb about Rebecca is that the reveals we expect to find are of course totally different to the reveals we get. A lot of this hinges on Olivier’s complicated and fascinating performance as Maxim. In many ways a man of total self-assurance – he barely breaks away from his breakfast to phone Mrs Van Hopper and inform her he will marry her companion – the more time we spend with him, the more his vulnerability, insecurity becomes clear, as does his patrician pride which leads to a self-damaging bluntness. When the secrets are revealed, its striking how this scion of the upper classes becomes suddenly lost – just as finally receiving some answers and reassurance turns Fontaine’s Mrs de Winter into someone more sure of herself than we have ever seen.

The film’s final act spools out a well-paced, intriguing courtroom drama, turned reversed murder-mystery. While some of the original novel’s developments are changed for code-related reasons (the usual provisos on crime and punishment), it makes very little impact on the compelling nature of the vice that seems to be trapping Maxim and his wife. Much of this is powered by George Sander’s superbly hissable turn as a preening playboy (and total shit), purring lines such as “I say marriage to Max is hardly a bed of roses is it?” with a near sadistic glee. It builds to a denouement straight out of horror, with Mrs Danvers taking rightful place as a demonic lord of misrule.

Rebecca was a product of the collaboration between Selznick and Hitchcock: two strong personalities who knew their own mind. Their relationship was fraught and troubled – they basically agreed on almost nothing – but the clash produced a work that stands as some of their best. Selznick demanded Hitchcock stick to the book – he had wanted to name the lead character ‘Daphne’, and introduce a running joke of sea sickness and a Jane Eyre-ish ‘mad woman in the attic’ – and in turn Hitchcock refused to film Selznick’s suggested flourishes (such as a smokey “R” filling the night sky for the final shot). Goes to show that conflict can produce great art.

Rebecca is an outstanding gothic melodrama, superbly acted (there is not a weak link in the cast) and brilliantly directed with a mist-filled flair and sense of heightened tension. A fascinating psychological puzzle while also being superbly gripping entertaining, it’s one of the finest Best Picture winning films of all time.