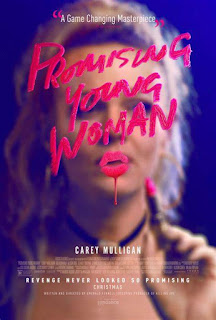 It’s late at night, you’ve had a few drinks and someone nice offers to drive you home. If you’re a man you probably think, what’s the problem? If you are woman, this can be just the first act of a night of sexual assault. It’s depressing to think this is the world we live in, but if there is one thing #metoo taught a lot of men, it’s that many women experience danger in situations we wouldn’t think twice about. These ideas are wonderfully explored in Emerald Fennell’s directorial debut, the striking, witty and deeply suspenseful Promising Young Woman.

Cassie Thomas (Carey Mulligan) goes out week after week to clubs. She lolls in the corner, slurs her words and waits for guys to offer her a lift home. Those taxis always swing past their own apartments, they always ask her to pop in for one more drink which swiftly turns into an attempt at sex. At which point, Cassie reveals she is entirely sober… Cassie’s revenge campaign is all about revealing to guys who think they are nice, that they are in fact not nice at all. Dealing with trauma over her past, Cassie’s only meaning in life is this campaign, at the cost of any personal life. But a chance meeting with Ryan (Bo Burnham), someone she used to go to college with, presents her with a choice – a new start or a settling of accounts with the man at the root of her trauma.

Emerald Fennell’s film is a superbly timely drama that brilliantly dances from genre to genre. It’s possibly the sweetest and most romantic revenge drama you’ll ever see, or the funniest shocking tragedy. But it’s primarily a film powered by righteous anger: the world shouldn’t be like this.

Many of the men are of course vile – and perhaps most of all because they are so superbly certain of their self-satisfied niceness. The film opens with one of these nights, Cassie pretending to be utterly wasted in a bar while three men chat about how drunk she is, but also how hot. The guy who seems the nicest pops her in an uber, takes her home, pours her a massive drink and takes her pants off. At which point Cassie, stone-cold-sober announces “What the fuck are you doing?”. Later Neil (Christopher Mintz-Plasse) will whine it’s not fair Cassie has “tricked” him into feeling bad (after he has already assaulted her). As if her not being helpless somehow makes him the victim.

But it’s not just men. Fennell’s film shows several times how many women conspire in keeping this status quo going. Cassie’s focused campaign against the people she holds directly responsible for the rape of her beloved best friend Nina starts with two women. One is the fellow student (now a self-satisfied mum-of-two, played with suburban smugness by Alison Brie) who thought that, by behaving like that, Nina basically had it coming. The second is the Dean of the university (a smoothly uncaring Connie Britton) who didn’t want to ruin the men’s careers. Both of these women are as much a part of the victim-blaming culture as the men Cassie shames on her nights out.

Fennell’s film is a brilliant expose of how toxic a certain kind of masculinity has become. And it’s not just the vile alpha-males responsible for the horror that happened to Nina (when we reach these people late in the film, their basic lack of humanity is staggering – even if Fennell strips them of any possible nuance by making them cartoonish in their Bullingdon-club vileness). The bulk of the men in the film are convinced that because they try and be nice, they therefore are nice.

But it’s still a film with a great deal of compassion. It notably isn’t a straightforward endorsement of revenge. It’s made clear what Cassie is doing is hugely dangerous – she has lucked out that the men she encounters are shamed into pleading and defensive whining. There is the distinct possibility that Cassie could be seriously hurt or worse – for all her planning and determination. That’s not to mention the psychological damage this has on her. She is a deeply disturbed, troubled and unhappy woman whose life is going nowhere.

It’s the emotional heart of Carey Mulligan’s wonderful performance. Mulligan nails the furious calm Cassie has on campaign – and her chilling authority in situations where she is on top. But she also shows Cassie’s emotional damage. She finds it impossible to open herself to any form of relationship, romantic or otherwise. She’s so shutdown she can’t even remember her own birthday. This crusade has sucked everything out of her life, and had a shattering emotional impact on her. Mulligan has never been better: a career defining performance, heartfelt and impassioned, dark and emotionally complex.

Fennell shoots the film with a real assuredness. When Cassie is in control, Fennell uses a series of carefully controlled static shots, often centring Cassie in the frame. Its only when events are out of her control that the camera shifts to greater movement and less stable shots. The confrontations are both darkly amusing but also chillingly edge-of-the-seat – because we can’t be sure whether everything will go wrong, or how far Cassie will go. Promising Young Woman is also very witty and even rather sweet – the slow, hopeful romance between Cassie and Ryan (a charmingly sweet Bo Burnham) is hugely endearing and gives the film a sense of hope. We’re torn: we want Cassie to have her revenge, but the damage to her is so huge that we also want her to move on.

It’s what makes Promising Young Woman a kaleidoscope of a film. Every time you shift it, your perspective changes. We thrill at seeing Cassie shame bad men, just as you worry for her safety every time. We never know what to expect from Ryan – after all we’ve seen so many men like him turn out to be predators – but we want him to be genuine. You’ll laugh one scene and have your stomach in knots the next. It culminates in a confrontation that shifts shockingly from black comedy to simply pure dark, more disturbing and difficult than you can imagine. Fennell – and a magnetic Mulligan – maintain all these different beats perfectly. A wonderful, and hugely timely, film.