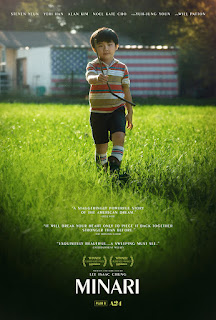 Lee Isaac Chung grew up in rural Arkansas during the Reaganite 80s, when everyone felt they could live the American dream. His young life – and the experiences of his parents – from the basis of Minari, an emotionally involving, tender and quietly hopeful film about planting a future. The film is named after an obstinate Korean plant which takes root and grows where it can – a struggle the Yi family can sympathise with.

Jacob (Steven Yeun) dreams of building a family legacy, a Korean food farm that will find an eager market among Korean-Americans. His wife Monica (Han Ye-ri) is less than keen, looking with dread at the leaky trailer house her husband has invested their savings in. Nevertheless, Jacob sets about planting with back-breaking dedication, but very little practical knowledge – all while he and Monica continuing working as chicken sorters during the day. Her concerns are not helped by the heart condition of their son David (Alan Kim) – and that they are now over an hour from a hospital. Not even the arrival of Monica’s mother Soon-ja (Youn Yuh-jung) to provide childcare can help reduce the growing tensions in this family.

Although Minari is mostly in Korean, this is a very American tale. Jacob is a man very much trying to live the American dream, building a new business (and life) for his family. Even more American than that, he’s doing it out in the American west, working to conquer land that has beaten several farmers before him. Minari perfectly fuses together a respect for Korean heritage and culture with an inclusive view of the American ideal: that being rewarded for your hard work is something anyone can achieve.

As such Minari repackages many familiar story elements – childhood memories, a bond between an eccentric elderly relative and a child, near biblical struggles against the elements to build a farm, marital problems and fish-out-of-water set-ups – into something that feels fresh and highly engaging. Chung’s involving, carefully intimate direction is crucial to this, his connection with the material helping make it both funny and at times heart-breakingly tragic, while never allowing it to slip from being fundamentally hopeful.

Jacob’s desire to build the farm is both impressively ambitious and strangely irresponsible. Jacob wants to demonstrate his family should have faith in itself, taking immense pride in ‘Korean smart thinking’ as he finds home-made solutions to farming problems. He works with such dedication – frequently to the point of physical exhaustion – that its impossible not to admire him. But as he carries out his improvised fixes – from a well he digs that runs dry to working out how close together he can plant his produce – everything carries an edge-of-your-seat tension, as we are all too aware he’s making it up as he goes. Yeun is excellent as a man afraid of failure, driving himself to do everything he can to escape that fate, but often too blunt and proud to ask for help.

Chung isn’t afraid to demonstrate the damage this can have on a marriage. The couple frequently argue. So much that they seem to have forgotten the romantic moments in Korea that bought them together – hearing ‘their song’ playing, Jacob can’t even remember having heard it. Monica resents a farm she never wanted but feels forced to support. Han Ye-ri is wonderful, beautifully expressing a range of suppressed emotions, her face speaking volumes about her shock on first seeing their new home. The couple move between arguments and silent non-communication as the pressure of trying to make this business work – combined with supporting a family– drives a wedge between them.

Much of this is seen from their perspective of their children, in particular son David (an effectively sweet performance from Alan Kim). Fitting for a film about a director’s memories of his childhood, David is really the main character, with his perceptions and interactions with the other characters driving the narrative. He’s at an age where he is just beginning to understand some of the problems in his life, but still has the joy and sulky stroppiness of a young child.

What becomes the heart of the film is the relationship between David and his newly arrived Grandma, who he ends up sharing a room. David’s hostility to this woman – he’s furious that she’s not like an American, cookie-baking Grandma, instead being too Korean and (according to David) smelly – slowly changes, as she treats him with an honesty he doesn’t get from his tense parents. Any friendship formed over one tricking the other into drinking piss is sure to last!

The Grandma is played, in a scene-stealing performance scooping a truckful of prizes, by veteran Korean actress Youn Yuh-jung. In many ways it’s a simple part – the older family member who says outrageous things, but has a heart of gold – but Youn plays it with a quirk but also an immense sincerity that becomes genuinely moving. Unlike his parents, she encourages David to do things (like running) rather than do as little to preserve his heart. She helps him build his confidence – and finds she has more in common with this bluntly-spoken child than anyone else. In turn she gives him the attention his stressed parents are unable to. It’s not an original role, but it’s quite beautifully judged.

What is (sadly) surprising is that this Korean family finds themselves warmly welcomed into this Christian Arkansas community. I was waiting – as I am sure other viewers have – for a moment of racism or for Jacob to be exploited. Instead, the Yi family are given nothing but support from banks and the church in Arkansas (the only person who does screw the family is an unseen Korean businessman who cancels a crucial order). The family makes friends with local eccentric and Korean war veteran Paul (a jittery but charming performance by Will Patton) who, when he says he’s honoured to be invited to their home, really means it.

This warmth, of people maybe arguing and feuding but coming together and supporting each other, is a big part of what makes this film hopeful. The characters may all make huge mistakes – but they do for the very best of reasons. This is not a depressing film – which considering how much goes wrong, is a surprise. It’s a film where hard work is noble and huge disaster strikes it draws people together not apart. The minari itself is a part of that message of hope: it will grow down by the river, forge a fine crop, and survive all disasters: like family, it’s something we can always rely on.