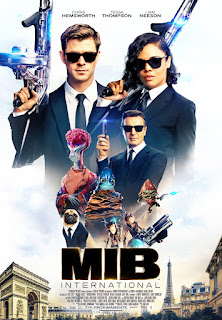 Remember Men in Black? An amusing, odd-couple buddy movie about a secret agency patrolling alien activity on Earth. To be honest, the well was pretty dry after when the first movie ended. The formula – with original stars Will Smith and Tommy Lee Jones – attempted to recapture the magic twice with diminishing returns. This, surely final, attempt subs in the stars of Thor: Ragnorak for an over-long, neither terribly exciting nor funny movie that feels like it’s been assembled by an arguing committee.

Molly Wright (Tessa Thompson) encounters the Men in Black when they erase the memories of her parents (but accidentally leave hers intact) when she’s a child. As an adult she becomes obsessed with joining them, dedicating her life to building the skills the agency needs. Recruited by shrewd head of US operations Agent O (Emma Thompson) as Agent M, she’s shipped to the UK to join forces with their ace Agent H (Chris Hemsworth), under the direction of branch chief High T (Liam Neeson), to safeguard an alien dignitary. When the dignitary is assassinated, Agents M and H find themselves at the centre of a conspiracy that could destroy the whole world.

Tonally, Men in Black: International is a mess. At times it’s a farcical buddy movie, at others a darker action film. What it is all the time is overlong, meandering and only occasionally interesting. It stretches its slim action over nearly two hours (the first film was barely more than 90 minutes!), with the plot featuring so many diversions and chases down rabbit holes, that you are desperate to get back to the Eiffel Tower for the signposted showdown.

It doesn’t help that most of the events in the film are fairly predictable. You only need to have seen a film before to work out who the ‘surprise’ villain is. Every action scene – flipping heck nearly every joke – has been done in hundreds of films before. Anything remotely interesting – in some version of this film Agent H could have been a washout, coasting on his glory days rather than the stereotypical cocky-but-cool hero he is – has been ironed out. None of the dialogue sticks even vaguely in the head and not one of the punchlines lands.

Every scene is written with a perfunctory A-to-B quality. For example, at their first meeting Agent H is dozing at his desk, when Agent M approaches to ask to join his latest mission. She has a comprehensive briefing prepared for him (because she’s new and eager) which he shoves aside with a few off-the-cuff I’ll-read-it-later gags (because he’s a bog-standard action hero who acts on instinct). He claims he wasn’t dozing but meditating and sends her on her way. As she leaves, she tells him he has a “tell”: when he meditates he snores. This is neither particularly funny or enlightening, but because Agent H needs to be impressed for the film to continue, he is and recruits her. That’s a decent insight into the formulaic writing.

F Gary Gray tried to resign multiple times as the story he wanted to tell – something slightly darker about alien refugees on the run from a hideous force – was forced more and more into cookie-cutter Hollywood summer blockbuster fare by the producers. Fights like this perhaps explain why the motivations and actions of several characters make little sense. While Gray and the producers feuded over their cuts of the films, Hemsworth and Thompson allegedly then hired their own scriptwriters to re-write their dialogue.

It ends up an incoherent film, where it feels like some scenes were inserted by test audiences. For example, Rebecca Ferguson pops up for essentially a pointless cameo where she gains control of the macguffin. This long sequences only exists so we can get: a hot actress as an ex for Hemsworth’s character, a fight between Ferguson and Thompson (because Hemsworth can’t fight a girl, he fights the heavy – complete with lame Thor hammer joke), and an unneeded wrap up of a minor plot hole from the film’s opening. At the end they get the macguffin back again – but you could have dropped the whole sequence and got to the ending much quicker and lost nothing.

Hemsworth and Thompson do their best, although the film can’t decide whether to make them buddies or potentially romantic partners. Perhaps the confusion comes about from the actors’ obvious lack of sexual chemistry (they are much more believable as mismatched buddies). I actually feel both actors would have been better the other way around, rather than the lazy casting here. Hemsworth’s sweet earnestness and geeky charm under the muscle would be better as the newbie agent, while Thompson’s confidence and no-nonsense brusqueness matches the more the experienced agent. They do their best anyway, but they have some piss-poor material to work with.

It says a lot that the best moments of the film feature Emma Thompson coasting with snark through a few minutes of screentime. Liam Neeson seems an odd choice for a character clearly written as a posh English gent. Rafe Spall’s casting memo clearly told him he was in some sort of cartoon farce, so embarrassingly broad is his performance. The CGI chess pawn comic relief character does and says nothing that has even a passing relationship with the word “funny”.

Men in Black: International is a fairly dull, predictable, unimaginative franchise entry that, by trying to appeal to everyone with its derivative stunts and jokes, ends up appealing to no-one.