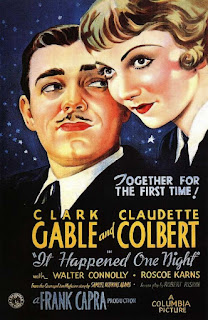 Two contrasting people thrown together over a set period of time, at first rub each other up the wrong way but then, doncha know it, frustration turns to love and suddenly we’re nervously watching to see if a last minute complication will throw a spanner into the works. If it sounds like a classic set-up – that’s because it is. Where did you think the set-up came from? Capra’s comedy – which scooped the Big Five at the Oscars (Picture, Director, Actor, Actress and Screenplay) is one of the most influential films ever made – and one of the funniest and sharpest examples of great film-making from Hollywood’s Golden Age.

“Daughter escaped again, watch all roads, airports, and railway stations in Miami.” Heiress Ellie Andrews (Claudette Colbert) has eloped with daring-but-dull flying ace “King” Westley (Jameson Thomas) but her father Alexander (Walter Connolly) won’t wear it as he’s sure Westley is only after her money. So, Ellie literally jumps ship in Florida (swimming to shore from her father’s yacht, she’s got some guts that girl) and decides to make her way to New York to reunite with her husband. Hopping on a Greyhound bus to New York, she meets recently fired New York reporter Peter Warne (Clark Gable) and, after a series of unfortunate incidents, the two of them end up penniless and travelling across America together. Will their waspish banter blossom into something else?

It Happened One Night is so delightful, as soon as its finished, you fancy skipping back and watch it again. It’s such a brilliant, sexy, romantic comedy it’s odd to think nearly everyone involved wasn’t even sure they wanted to do it. Re-named from the less catchy Night Bus (and who cares if the film actually takes place over several nights), it was rushed into production to take advantage of Colbert’s availability (she only agreed to do it if it filming took four weeks). Gable was loaned out by MGM against his will. Capra and Colbert didn’t really get in and screenwriter Robert Riskin re-wrote the script on set. If you ever needed proof adversity leads to a classic, take a look at this.

It Happened One Night beautifully charts how two mismatched people can be surprised by how much in common they have. Both are, in their own way, fiercely independent. Ellie will marry the man she wants, and hang the consequences. Peter gets the spike permanently because his unique way of doing things doesn’t fit with his editor. They are both quick-witted people with dreams who don’t suffer fools. At first she thinks he’s smug (and in a way he is), he feels she’s entitled (after all its day two before she asks his name). But they bounce off each other from the start, each an equal match for wit (not to mention they both clearly fancy the pants off each immediately).

What’s going to bring the “walls of Jericho” tumbling down between these two? Forced into sharing a hotel room at night, Peter astounds Ellie’s expectations by throwing a sheet up between them, their own little wall of Jericho. Colbert judges perfectly this scene how Ellie’s exasperation also mixes with something pretty close to disappointment. After all she’s already cuddled up to Peter, sleeping on the bus – and Peter in no way objected. Later, in a mirroring hotel room scene Peter will speak openly about how he’s longed for a woman with freedom and spirit (and Gable does this with a beautiful wistfulness) – exactly the qualities he has seen grow in Ellie over their days together.

What works wonderfully is how naturally this relationship becomes first a friendship, then something deeper. Improvising a marital argument, pretending to be a plumber and his wife to put detectives off her scent, they complement each other perfectly. What’s fabulous about this scene, is that (to their surprise) they are equally delighted by how smart and witty the other is. Their gleeful giggling is not only very sweet, but also the start of a new chapter in their relationship. The scene culminates with one of the few moments of intimacy on film involving clothes going on, as Peter helps Ellie button up her blouse.

What’s endearing about them – helped by Riskin’s sparkling dialogue – is how they settle into ‘roles’ and eagerly bounce off each other. Peter increasingly effects a parody of self-importance, claiming to be a world expert on everything from donot dunking to hitchhiking. Ellie gleefully punctures his grandiose claims, but enjoys playing up to her own image of the heiress, at sea in the real world. This is how real people fall in love – and the film is confident enough to have them exchange private jokes we can’t hear on the backseat of a car. It’s gloriously romantic because it feels true.

Gable and Colbert’s chemistry is scintillating. Both are supremely funny, but also grounded. When they lark about they feel like real-life sweethearts. Colbert gives Ellie a wonderful vulnerability under the self-entitlement. She’s snappy and quick-witted but confused and even a bit frightened by her growing feelings. Gable’s easy charm also has a slight chip on his shoulder: but he’s also laid-back and more than willing to look silly, proud but self-aware with it. He’s also a hugely adept physical comedian (his demonstration of how to hitch-hike is hilarious).

Moments have passed into film lore. Gable’s extraordinarily silly hitch-hiking routine, cars streaming past, until Colbert flashes a bit of leg. This is a beautifully staged scene, a cheeky bit of sexuality a brilliant punchline to an extended showcase for Gable’s comic timing and Colbert’s reactive skills and composure. The dialogue exchanges between the two are superbly delivered. The film was a massive sleeper hit – it even has one of the best examples of reverse product placement, when the reveal Gable’s character didn’t wear an undershirt allegedly led to sales of that garment plummeting.

The direction from Capra is spot-on, classic Hollywood but mixed with some beautiful framing and some dynamic camera movements, including some lovely tracking shots particularly through the bus (Capra’s visual direction in a confined space here doesn’t get enough credit). Capra also ensures we don’t forget this was the time of depression: money is tight for everyone, many of those on the bus are desperate for work and the out-of-touch affluence of Ellie rightly raises heckles.

Above all, Capra creates a hugely sweet romance – with lashings of sexy chemistry but not a jot of sex. Wipes and fast transitions keep the pace up. The dialogue pacing is perfect. He uses light wonderfully: in the two hotel room scenes, light carefully divides up and then unifies our two leads, dancing off their Ellie’s eyes and reflecting how they are beginning to see each other in a new light. It has a reputation as a screwball comedy, but really its a carefully paced character comedy, where Capra lets the relationship flourish organically from scene-to-scene (only Peter’s “hold-the-press” editor and irritating fellow bus rider Shapely – the inspiration for Bugs Bunny – are characters who could walk into screwball unchanged).

Above all, he draws fresh, relaxed and emotional performances from the two leads. The bond between them has been so comfortably formed – and resonates so strongly – that the film can get away with being possibly the only romantic comedy in history where the couple never kiss and don’t share the screen in the final act. It’s a film where two characters bantering and sharing heartfelt truths, sleeping in separate beds on opposite sides of a sheet has more sexiness and emotion to it than a world of rumpy-pumpy. It Happened One Night is just about the perfect romantic comedy, oft-imitated but never-bettered. You’ll want to watch it again as soon as it finishes.