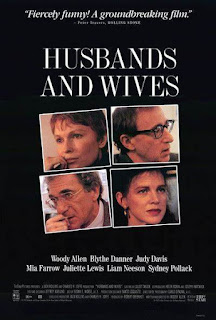 Gabe (Woody Allen) and Judy (Mia Farrow) are shocked and confused when their best friends Sally (Judy Davis) and Jack (Sydney Pollack) calmly announce before dinner they are separating. Both find themselves new partners – Judy’s colleague Michael (Liam Neeson), who Judy is also attracted to, and new-age aerobics trainer Sam (Lysette Anthony) – but also discover the grass is not always greener. Meanwhile, Judy is increasingly discontented with her childless marriage and Gabe develops a flirtatious friendship with his student Rain (Juliette Lewis), an aspiring writer with a fixation on older men.

You can’t watch Husbands and Wives and not think about the real-life relationship between Allen and Farrow. The film was their last collaboration and released just as their incredibly public separation filled the newspapers (which it has continued to do ever since). Farrow is cast as a character that, like Hannah and Her Sisters, feels like a twist on her own life – only this time darker. Again, the conceiving of children is a major problem for the Allen-Farrow characters and Farrow’s character is described as considerate but overbearing, with the addition here that she is passive-aggressive and manipulative. You can’t help but think, how much was Allen already resenting her?

But, leaving aside the psychology (I think it’s a fair thought though – Allen’s own films have commented numerous times on how writers re-write their own lives, and there are more than enough signs Allen does the same) this is still one of Allen’s most impressive works. Husbands and Wives explores the complex nature of adult relationships, in particular how familiarity can breed a dissatisfaction with our own lives. It also looks at how moving on is never easy and how we are still tied with emotional cords we can’t easily cut to the very people we might want to leave behind.

So, Jack can jump into his new relationship with the younger and sexually exciting Sam (Jack smugly sings the virtues of healthy living and watching silly films). But he is still overcome with jealousy when Sally also starts dating. Sally says she enjoys the single life – but during a date constantly retreats into a side room (where she can be easily overheard by her date) to phone Jack and berate him for moving on so soon after their separation. Allen argues that, discontented and problematic as Jack and Sally’s marriage may be, it is so familiar to them that the idea of leaving it is too much.

Essentially, the shared memories and experiences of a long-term relationship make it too difficult to move on. The separation of their friends makes Gabe and Judy readdress their own relationship – and the find its closer to the rocks than they think. With the passion gone, Gabe feels Judy doesn’t need him while Judy is unhappy with Gabe’s unwillingness to have a child. Judy doesn’t share her poetry with him and Gabe feels she is overly critical of his new novel (and is unhappy about the character in it who is clearly her). Inevitably (it is Allen) sex comes into play – both Gabe and Jack are sexually dissatisfied: Judy has lost interest and Sally can’t enjoy sex (not even with Liam Neeson).

Gabe, therefore, allows himself to get closer to Juliette Lewis’ student on the creative writing course he teaches. Again, being Allen, there is a considerable age difference – but at least that’s addressed in the film, as every single one of Rain’s exes are older men, all with positions of authority over her (a family friend, her psychiatrist, her teacher…). Lewis is rather good as this coquetteish flirt, and Gabe is (at first) much more open to her criticism of his book than he was from Judy (largely as, consciously or not, he wants to get in her pants).

The film is shot with a cinema verité fly-on-the-wall immediacy, echoing documentary. It has the characters pop-up as talking heads throughout, discussing their perceptions and feelings to an unseen interviewer. It’s an approach that has mixed results – although an interesting new way for Allen to use the internal monologue. The documentary approach does, however, produce some excellent scenes. Most striking, the raw hand-held energy of the opening scene, where Jack and Sally announce their separation to the rising horror and shock of Gabe and Judy, surely one of Allen’s finest shot and acted scenes.

Of course, they are mainly horrified because they see they have even less in common, really, than Jack and Sally. While Allen throws in one happy marriage – Rain’s parents seem loving – he also makes it clear their daughter is maladjusted. Husbands and Wives suffers under Allen’s cynicism for humanity – there isn’t a lot of hope in here, other than you might find a more functional type of contented misery. The sympathy also drifts more to the male characters: Gabe is a sort of innocent, Jack impulsive but his actions justified. On the other hand, Judy is a manipulator, Sally an shrill, frigid neurotic, Sam an idiot and Rain a temptress.

The performances are good. Judy Davis is very good (and Oscar-nominated) as the difficult, emotionally confused Sally. Pollack is fittingly smug as a man in the midst of a mid-life crisis. Neeson rather touching as an overly needy editor. Allen and Farrow play familiar parts, but with an accomplished ease. It’s just that Husbands and Wives is a rather glum watch – for all the jokes. It takes a depressing, rather archly cynical look at a world that doesn’t have a lot of promise in it. While it might well be truthful, the documentary approach of the film sometimes brings it closer to the Allen/Farrow home than you might find comfortable.