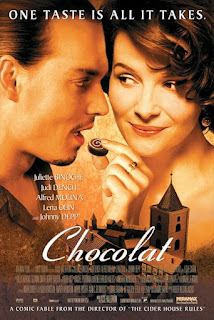 In 1950s France, expert chocolatiere Vianne Rocher (Juliette Binoche), and her six-year-old daughter Anouk (Victorire Thivisol) travel the country following the North Wind accompanied only by Anouk’s imaginary kangaroo. If that sentence alone has too much whimsy for your stomach to take, don’t invest two hours of your time in the rest of the film. Vianne and her daughter rock up in a very traditional town, run by the Comte de Reynaud (Alfred Molina), a stuffed-shirt who won’t admit his wife has left him. The austere Comte is horrified when Vianne’s sweet goodies prove super popular with the townspeople, whose lives suddenly start to change in profound and exciting ways as the quality of the chocolate helps them discover their own suppressed desires.

As if the title alone wasn’t enough of a warning, Chocolat is almost impossibly sweet, like being water-boarded by hot chocolate. Shot in a village that can only be described as chocolate box, it’s twee, sentimental and exhibits practically all the worst elements of cosy women’s fiction. With Miramax muscle behind it, this heavy-going confection briefly persuaded the world it was some sort of easy-going arthouse picture – rather than a smug fable of cliched situations and characters, coated in an unsettling number of scenes of actors eating chocolate with orgasmic grins.

It will not surprise you to hear that Vianne’s arrival in the village is the catalyst for huge change – the sort of change a trailer would surely describe as “their lives were all starters, until she showed them the importance of dessert”. Vianne is played by Juliette Binoche channelling Nigella Lawson as a yummy mummy domestic goddess. Her shop operates with the sort of business model that only exists in escapist fiction: customers spin a sort of Rorschach wheel and whatever they see in the picture decides the chocolate they will buy (no one would dare ask “Do you just have a box of milktray?”). The whimsy is nearly as thick as the molten goodies in the mixing bowl.

The village is stuffed with esteemed actors going through the motions. Judi Dench shows Maggie Smith that she can play crusty-old-women-with-hearts-of-gold as easily as her, as a grandmother who has been refused access to her grandson by his over-cautious mother. (It’s the sort of role people love to see veteran actors do, and duly landed Dench an Oscar-nomination). With some flatly written lines, Dench provides a bit of sparkle in a role she could play standing on her head. Carrie-Anne Moss is pretty good as her daughter, a repressed fusspot, who won’t let her son have fun. John Wood plays a crusty bachelor with the hots for war widow Leslie Caron. You don’t need to be a master confectioner to mix these ingredients together into the expected resolutions.

Hallström keeps events ticking gently along, in a film so soothing it seems designed to help you fall asleep. For a while Hallström was the go-to-guy for middle-brow, unimaginatively “prestige” adaptations of middle-brow, popular novels (this was his second after The Cider House Rules – and he had several to follow – each progressively a bit worse than the one before). The closest genuine emotion comes from Lena Olin’s abused wife of bullying café owner Peter Stormare. Sure, Olin’s problems are solved in about a few minutes, but the threat to her from Stormare is an intrusion of something that feels genuinely dramatic in what is otherwise a souffle. (Olin gets the film’s only memorable line, whacking her husband over the head when he attacks Vianne with the words “Who says I can’t use a skillet”, a line that’s both rather funny and bizarrely out of place.)

Naturally, the stuffy village learning needs to learn to cut lose a bit and embrace life, love and happiness. Alfred Molina’s Comte is the sort of chap who browbeats the local priest (who loves himself a bit of Elvis) into parroting the conservative sermons he’s written for him about the virtue of being miserable. Of course, the Comte is actually a decent guy (when he finds out what a bastard Stormare is, he banishes him at once), just old-fashioned and as much in need of the orgasmic power of chocolate to heal his pain as everyone else. Did Cadburys and Hersheys sponsor this film?

Just when you thought the film’s cosy warmth and supreme heritage gentleness couldn’t get more trying, it tops itself with the arrival of a punch of whimsical Romani people even more smackably smug than Vianne. Worst of all they are led by Johnny Depp at his most lazily teenage dream-boat, sporting a pony-tail and a bizarre Irish accent. He’s even more of a free-spirit than anyone else, strumming his guitar at the drop of his hat. You’ll dream of a hole in his boat taking him to the bottom of the Seine.

It all ends as you might expect: everyone discovers lovely things about themselves and each other, everyone settles down, Depp and Binoche get-it-on (and keep the relationship going as he drifts in-and-out town), the Comte becomes a top bloke and the invisible kangaroo skips away on the North Wind. Eat a box of Quality Street instead.